How Should the U.S. and China Approach the Next Economic Dialogue? 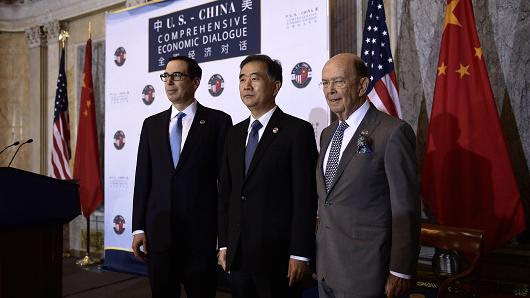 The first China-U.S. Comprehensive Economic Dialogue (CED) concluded in Washington, D.C. on July 19th without an agreement or joint communication. Even the scheduled separate press conferences were cancelled, first by the U.S., then by China. How should we interpret these signs for China-U.S. economic relations in the future?

First of all, it should be noted that such an outcome was not totally unexpected. For domestic political reasons, neither China nor the U.S. can give the appearance of making significant concessions at this time. On the Chinese side, the critical 19th Party Congress will be held within the next three months, and it is important for China to project confidence and strength. On the U.S. side, President Donald Trump has not had much luck in fulfilling his campaign promises, such as the repeal of President Barack Obama’s Affordable Care Act, the building of a wall along the entire Mexican border, and the re-negotiation of the North American Free Trade Agreement. The North Korean problem continues to look intractable and there is the ongoing investigation of his Russian connections. The President needs a clear and publicly visible win, not a compromise. He is a dealmaker—a transactional person—not a community builder.

The principles announced by both sides are non-negotiable. The U.S. side spoke of balance, fairness, and reciprocity. The Chinese side emphasized that the negotiations should be non-confrontational and produce mutually beneficial outcomes. But neither China nor the U.S. are accustomed to treating another country as a friendly equal. China, who as a dominant power in Asia for many centuries, and considered all neighboring countries as its vassal states, never treated or was treated by any other country as an equal. The same exceptionalism can be said of the U.S., which makes negotiations between them all the more difficult.

Some of the U.S. demands at the Dialogue were not even supported by U.S. businesses. For example, lowering automobile tariffs in China is not welcome by GM or Ford, both of which have large manufacturing operations in China, and benefit from the existing tariffs. The U.S. threatened to impose quotas or tariffs on imports of Chinese steel and aluminum, but such Chinese imports account for only a minuscule percentage of total U.S. imports of these materials, and will do very little to narrow the U.S.-China trade deficit. Such actions would be merely symbolic. There is also a possibility that the U.S. may choose to label Beijing a currency manipulator so that it can undertake additional protectionist measures against China. However, for the past year, if there was any manipulation on the part of China at all, it was to prevent the yuan from devaluing against the U.S. dollar—exactly the opposite of what it would need to do to gain an advantage for its exports. Moreover, one can also argue that the U.S. was actually an indirect currency manipulator through its recent quantitative easing policies.

The U.S.-China bilateral trade deficit is actually not as large as it appears. A recent study that looks at domestic value-added, that is, the GDP created by exports of goods and services to each other in the two countries, has come up with an estimate for 2015 of a U.S. deficit of $132.7 billion, compared to an estimate of $367.4 billion based on U.S. data on exports of goods alone. Furthermore, this value-added estimate does not include the value of patent licensing fees paid by Chinese enterprises to foreign (e.g., Irish) subsidiaries of U.S. companies such as Apple and Qualcomm, which can amount to many tens of billions, and should be properly attributed as revenue from U.S. exports of services to China. If included, it would make the U.S.-China trade deficit even smaller.

The efforts of future CEDs should therefore be focused on increasing U.S. exports of both goods and services to China in order to lower the trade deficit. For example, China can increase the import of U.S. oil and gas, now that restrictions on such exports have been relaxed. It can also increase imports of high-technology products (if the export restrictions can be loosened), and agricultural products such as beef, pork, rice and dairy products. The number of Chinese tourists visiting the U.S. will continue to rise, and the number of Chinese students studying in the U.S. may do the same. Chinese restrictions on wholly foreign-owned commercial banks and life insurance companies are likely to be relaxed, so long as they are reciprocal, and the financial institutions satisfy threshold capital requirements and operate with domestically capitalized subsidiaries. With a coordinated effort, the U.S.-China bilateral trade deficit can be significantly narrowed, if not closed altogether, within a few years.

A relevant factor for the bilateral investment relations between the two countries is the excess savings in China. Chinese national savings exceed 40% of GDP each year and, given the existing excess capacities in almost all major manufacturing industries, cannot be productively deployed domestically. Thus, these excess savings will need to be invested overseas. The U.S. will be one of the natural destinations. Chinese savings can also be invested in U.S. infrastructure projects, either directly, or in their bonds, helping to realize one of President Donald Trump’s campaign promises. While some people may fret about the possible impact on national security of foreigners owning U.S. infrastructure, the fact of the matter is that the infrastructure is located in the U.S. and the government can always intervene if and when national security is threatened.

In conclusion, there is little doubt that closer China-U.S. economic cooperation is a positive-sum game. In the foreseeable future, the rate of growth of Chinese demand for U.S. exports of goods and services is likely to be much higher than that of U.S. demand for Chinese goods and services, meaning that the U.S.-China trade deficit should be further narrowed. However, an all-out trade war will be damaging for both. I believe rationality and, more importantly, self-interest, will prevail and prevent a serious trade war from occurring.

This article was originally published on China-US Focus, an initiative of the China-United States Exchange Foundation (CUSEF). The views expressed in this article are the author's, and do not necessarily reflect the views of China-US Focus.