A Look at China-Arab Summits 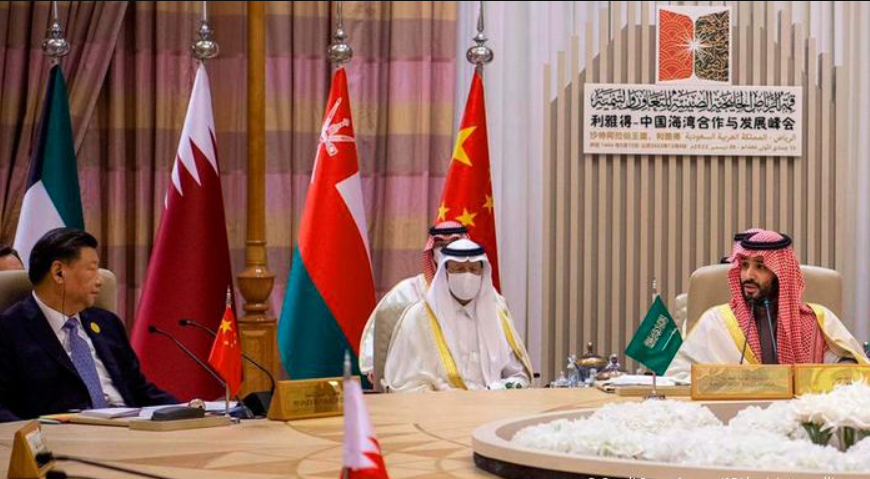 The First Arab States-China Summit was held in the Saudi Arabian capital, Riyadh, on Dec. 9, after China had met with Saudi Arabia and the Gulf Cooperation Council. The three summits perfectly showcased the “Middle East moment” in Chinese diplomacy.

But as Chinese and Arab media were speaking highly of the epoch-making milestone in relations and aspiring to build a community with a shared future for Arab states and China, some Western media were claiming that the three summit meetings indicate that China wants to enhance cooperation with Arab states to fill a so-called Middle East vacuum — a term U.S. President Joe Biden used openly during his July visit to the Middle East. He said the United States would continue providing leadership in the region and would not allow other countries to fill what he call a vacuum.

In truth, if any vacuum exists, it only means that Biden was conceding that the U.S. had already withdrawn from the region, that American influence has dwindled and that such models as “oil for security” or an “Arab edition of NATO” — which the U.S. has sought in the past — have all failed. Following the logic, any country’s move to strengthen relations with the Arab region could be considered filling a vacuum.

Responding to Biden’s July remarks, a Chinese Foreign Ministry spokesperson once noted sardonically that “the people of the Middle East are the masters of the Middle East” and that “the Middle East is nobody’s backyard. Nor does a so-called vacuum exist.” Since there is no vacuum, filling it is merely an exercise of the imagination.

Second, judging from the achievements of the three summits between China and the Arab states, the two sides are determined to jointly deal with the short planks of economic development, rather than any military or security vacuum. The Middle East has always been afflicted by various contradictions and conflicts, but the path of providing oil in exchange for security didn’t work, so it is now trying to strengthen relations with the world’s largest oil importer — China — using an “oil for development” model.  This aligns with the comprehensive Chinese outlook on national security that emphasizes development as the universal key to all problems and the idea that development and economic security are the cornerstones of national security.

That is why during the Arab States-China Summit the two sides signed the outline of a plan for all-around cooperation between China and the Arab states, in which the two sides agreed to pursue eight joint actions over the next three to five years in the fields of development, food security, public health, green energy security, inter-civilization dialogue, youth talent cultivation and security and stability.

The summit published the Riyadh Declaration of the First Arab States-China Summit, announcing that the two sides had agreed to make every effort to build an Arab States-China community with a shared future in the new era. Saudi and Chinese companies signed 34 investment agreements of various sorts valued at $29 billon and covering such areas as green energy, green hydrogen, photovoltaic energy, IT, cloud services, transportation, logistics, medical services, housing and factory building.

The Chinese and Saudi governments also signed agreements dovetailing the Belt and Road Initiative with Saudi Vision 2030, under which they would promote cooperation on infrastructure, production capacity, energy, trade, investment, finance and cultural and people-to-people exchanges. They would also promote construction of a special development zone — the Jazan Industrial City for Basic and Downstream Industries.

Finally, China’s partnering up with such Arab states as Saudi Arabia indeed could expand both sides’ diplomatic space. In addition to seeking to diversify their industrial models, the oil-and-gas-rich Middle Eastern countries have been making unremitting efforts for diplomatic autonomy and diversification. Particularly since the Russia-Ukraine conflict broke out, Saudi Arabia has prioritized OPEC’s own oil and gas security, and has been bold enough to say no to Biden’s request for increased oil output. As the U.S., Europe and other Western nations press Asian, African and Latin American countries to take sides, China and Arab states getting closer has actually reflected the truth that many countries in the world are unwilling to be taken hostage by the Russia-Ukraine conflict and become victims of the food, energy and financial crises the war has triggered.

China-Arab RelationsArab World
printTweet
You might also like
Back to Top
CHINA US Focus 2023 China-United States Exchange Foundation. All rights reserved.