Shinzo Abe finally delivered his speech commemorating the 70th anniversary of the end of World War II on August 14. Though the speech did include the “four key words” – “apology”, “remorse”, “aggression” and “colonial rule”, it failed to present a correct outlook on history. On the contrary, it embodied the “five-point arrangement” Abe had made at the beginning of 2015, reflecting his meticulous calculations of its “political, diplomatic effects”. 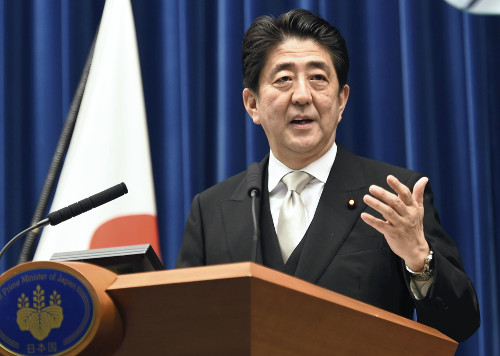 In contrast to the Tomiichi Murayama speech, which started with the expression of “deep remorse” for the “tremendous loss and suffering inflicted upon people of countries of the world, especially those in Asia” by Japanese “colonial rule and aggression”, Abe’s statement began with emphasis on the “sense of crisis” the waves of western colonialism had created in Japan a century ago, which later presented motivation for Japan’s modernization drive, its establishment of “constitutional government”, and preservation of independence. It even went so far as concluding that “The Japan-Russia War gave encouragement to many people under colonial rule from Asia to Africa”. Following that, Abe claimed that the “movement for self-determination gained momentum” after World War I, and “a new tide of outlawing war itself” emerged in the international community. However, the Great Depression resulted in “Western countries launching economic blocs by involving colonial economies”, “Japan’s economy suffered a major blow…Japan’s sense of isolation deepened and it attempted to overcome its diplomatic and economic deadlock through the use of force.” The Manchurian Incident and Japan’s withdrawal from the League of Nations were defined by Abe as “challenge” to the “new international order”. Obviously Abe’s logic of history cannot lead to a correct sense of history, not to mention clearly defining “aggression”. Abe has thus thoroughly obscured the inherent connections between “colonial rule” and “aggression”, completely absolving Japan from corresponding responsibilities.

Previously, as a private consultancy for Abe’s speech, the Commission on a Framework for the 21st Century claimed that “aggression” doesn’t have a clear “definition” in “international law”. When it comes to “international law”, Japanese experts contend that the current international legal system remains a “modern” system of international laws, and a “contemporary” one is yet to be established. As to the legal basis for territorial sovereignty, they advocate that “cession” is the “sole” “legal basis”. Therefore, “colonial war” and “colonial rule” can be substituted for “annexation”. Following such logic, Abe’s speech can get around “colonial rule”, and avoid apologizing to the Republic of Korea and Taiwan. Such a statement is not just outrageous regression from those by Tomiichi Murayama and Koizumi Junichiro, but also mirrors contempt for victims of Japanese colonial rule and war of aggression. How can Abe, by so doing, seek “reconciliation” with the rest of Asia?

It is beyond imagination that, after reviewing history of the past hundred years, Abe, instead of expressing remorse and apology, shifted to the loss of “more than three million” Japanese lives in “the war”, the “atomic bombings of Hiroshima and Nagasaki”, “the air raids on Tokyo and other cities”, the misery of defeat, concluding thereby that “the devastation of war” should never be repeated. After enumerating “incident, aggression, war”, Abe began to brag about Japan’s pledge to “never again resort to any form of the threat or use of force as a means of settling international disputes”, emphasizing that “With deep repentance for the war, Japan made that pledge. Upon it, we have created a free and democratic country, abided by the rule of law, and consistently upheld that pledge never to wage a war again. While taking silent pride in the path we have walked as a peace-loving nation for as long as seventy years, we remain determined never to deviate from this steadfast course.” After that, he resorted to indirect statements, claiming that “Japan has repeatedly expressed the feelings of deep remorse and heartfelt apology for its actions during the war”, continuing to evade apologizing personally. The Japan Economic News correctly pointed out that Abe “just gave a list of key words, dodging direct expression of introspection and apology”.

Even more perplexing, after implanting such key words as “apology”, Abe began to emphasize that “In Japan, the postwar generations now exceed eighty per cent of its population. We must not let our children, grandchildren, and even further generations , who have nothing to do with that war, be predestined to apologize.” He shifted the limelight to contributions of post-war Japan, democracy and rule of law in Japan, and its commitment to not resolving international disputes by force.

Abe evidently attempted to seek direct dialogue with leaders of China and the ROK by means of his speech, wanting to boost his own political and diplomatic scores. A member of the Commission on a Framework for the 21st Century had stressed prior to Abe’s statement that his remarks should be based on “meticulous calculation of political and diplomatic effects”. A well-known scholar from a Kumagaya college had also pointed out beforehand that for Abe, the speech “would better be described as enumeration of post-war Japan’s contributions than a summary of the war”. As early as the beginning of the year, while countries began commemorations of the 70th anniversary of the WWII, Abe had disclosed that he would present an “Abe speech” that is different from previous ones, and made a five-point arrangement to showcase “Abe characteristics”: 1, look back on the paths of Japan and the rest of the world in the 20th century, and draw lessons from the 20th century; 2, self-praise post-war Japan’s road of peace, economic progress and international contributions; 3, highlight the “path toward reconciliation” with the United States, Australia, Europe, especially such Asian countries as China and the ROK; 4, present the prospects of the 21st century Asia and world; 5, put forward Japanese policy proposals. The purpose was to water down commemorations of the 70th anniversary of the world’s wars against Fascism, shift the responsibilities for Asia’s inability to achieve reconciliation onto other Asia countries, and make the rest of Asia accept its morbid outlook on history through confusing the logic of history, obscuring the definition of aggression, and denying responsibilities for the war of aggression, and on such a basis to kick-start a new cycle in international politics. Former Japanese Prime Minister Nakasone Yasuhiro once issued a warning about this, writing that Japan has demonstrated explicit nature of aggression since it put forward the “21 articles” against China in 1915. He proposed that Japan must reflect sincerely on history so as to have a bright future, accentuating that building relations of trust with the rest of Asia should be given top priority in its pursuit of national interests.