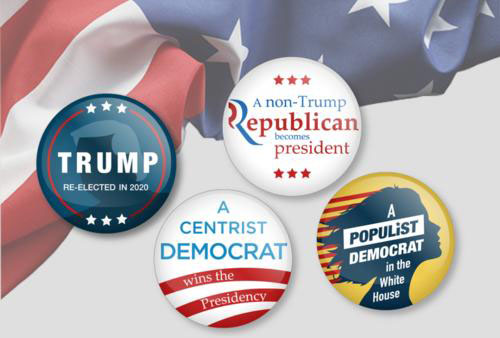 (Four scenarios for 2020 by ING, THINK Economic and Financial Analysis)

General elections are an important arena for wrangling in American politics, and a weather vane for observing the policy orientation of the U.S. This year, the last full year of Trump’s first term, there will be not only a presidential election, but a congressional election in which the entire House of Representatives and one-third of the Senate will be on the ballot.

With the abortive impeachment effort, Republicans offer strong support for Trump’s bid for re-election, even as there have been plenty of new faces among Democratic candidates.

The policy proposals of both parties’ candidates have been conspicuously radical. Though China has yet to become a focus in the upcoming campaign, the influences and challenges for China-U.S. relations should not be underestimated.

First, judging from past experience, what the general public is most concerned about remains the economy, which involves economic growth and the state of the stock market, but arguably has more to do with strong public dissatisfaction with income disparities, inequality and widening income gaps, not to mention the perennial hope for election outcomes that bring practical benefits.

The present state of the world economy allows for little optimism. Cyclical and anti-cyclical factors have joined forces to mar global growth prospects. Trade protectionism is rising, uncertainties are increasing and downward pressures press more heavily. Oscillation could become the new normal in 2020.

The International Monetary Fun has projected global GDP growth for 2020 at 3 percent, the lowest since 2009. According to the World Trade Organization, global trade in the first six months of last year grew 1 percent, the lowest since 2012. Trade tensions have only increased since the beginning of this year, and negative growth is inevitable.
Experts predict that in 2020 the probability of bubbles in global assets, as well as stock markets going bust. So the probability of economic recession is high. Should that be the case, the U.S. economy and stock market cannot escape adversity. To make matters worse, the novel coronavirus outbreak is adding new variables to the Chinese and global economies.

Since the 2008 financial crisis, the U.S. has maintained monetary easing and low-interest policies, and the marginal effects of such policies have steadily dwindled. More than 30 central banks have lowered interest rates, and the world economy has entered an era of zero, even negative, interest rates, brewing financial risk no less than before 2008.In this general election year, the U.S. will continue to stick to the beggar-thy-neighbor “America first” policy with respect to China, and it will likely weaponize its financial advantages to suppress Chinese scientific and technological progress via economic and financial sanctions against Chinese high-tech firms.

Though the two governments have signed a phase one trade agreement, what implementation looks like and how they would approach the sensitive next stage of negotiations remain unknown. Trying to score against China in the economic and financial sectors and leave voters the impression that the U.S. is “winning” is standard procedure for the Trump administration, and candidates of both parties will support it. The U.S. commerce secretary has just claimed the epidemic in China will facilitate the return of American manufacturers back home. Such extremely selfish thinking is astounding.

This year, China will make bolder strides in financial opening-up, with its economic interdependence with the rest of the world deepening. It will see a massive influx of capital from the U.S. and others in Chinese state bonds and stock markets, as well as in banking, insurance, asset management services and the extension of new international cooperation through the Belt and Road Initiative.

The overseas pool of funds in renminbi will continue to expand. The impacts of international capital flow and interest rates changes on Chinese finance will grow to test the Chinese financial sector as well as the determination for internationalizing the renminbi.

Second, given that ideological mudslinging is standard practice in U.S. general elections, China-bashing will undoubtedly be used as a tool by the candidates of both parties to woo voters.

U.S. Secretary of State Mike Pompeo has called the Communist Party of China a core “threat” to his country. Vice President Mike Pence and other ranking officials have made similar remarks, fully revealing the deep-rooted ideological prejudices against China by radicals in the U.S. and their fear of the advantages of the Chinese system.

China’s progress and success on its chosen path has again demonstrated the collapse of the U.S. theory of the “end of history.” Naked U.S. attempts to interfere in Chinese domestic affairs and violate its sovereignty — such as the U.S.-directed color revolution in Hong Kong and successive legislative acts related to Hong Kong, Taiwan and Tibet — all indicate the U.S. objective to label China as a “main strategic competitor” and carry heavy overtones of a clash of civilizations.

The politics of U.S. general elections is seriously vulnerable to identity politics and populism. Helpless in the face of wealth gaps and expanding inequality, neither party’s candidates ever come up with objective analyses, explanations or solutions.

The institutional crises of U.S. capitalism is on the horizon. It will further tear apart social structures, sharpen domestic contradictions and render domestic politics (particularly general election politics) even more radical. Meanwhile, the crises will have spillover effects, as the government tries everything possible to create crises, scapegoats and imagined enemies. Foreign policies will become extremely forceful, and military adventurism will continue its rise. As a “main strategic competitor” of the U.S., China may easily become an election-year scapegoat for various domestic troubles in the U.S.

China is the largest trading partner of nearly 130 countries and regions. It has contributed more than 30 percent of global annual growth for more than a decade and is an important engine of global economic growth. That China needs the world and the world needs China has become the international community’s consensus. It is only after seeing the Chinese people’s growing confidence in their system and national strength — uniting around the CPC to build a modern, beautiful China — that the U.S. has made up its mind to engage in high-intensity strategic competition and gaming, even though it may sink both countries in the so-called Thucydides trap.

Third, in a general election year, the U.S. presence in international affairs drops conspicuously. It often overreacts to state-to-state issues and global challenges, withdraws from international cooperation and organizations. At the same time, its geopolitical impulses strengthen, and tensions escalate in relations with major countries, creating disorder in global governance.

International strategic stability has been weakened seriously in recent years. Security conditions in Europe, the Asia-Pacific and the Middle East are very fragile and harsh; major-power competition continues to be prominent worldwide; regional powers face power vacuums and disorder; competition for regional dominance remains complex and fierce; and regional hotspots have become even more dangerous. Conditions are becoming increasingly chaotic.

U.S.-Russia contradictions are deepening, as seen in their wrangling over Ukraine, Syria and Iran. The harsher sanctions against Iran involve Russian interests in Iran and the Middle East. The U.S. is also imposing extra-territorial sanctions on Nord Stream 2, the natural gas pipeline featuring cooperation between Europe and Russia, as well as the TurkStream natural gas pipeline project. Any European companies that participate in these projects will be subject to economic and financial sanctions, and their assets in the U.S. will be frozen.

Although U.S.-Russia wrangling is dramatically different in nature from what it was during the Cold War, the U.S. attempt to prevent Russia from coming back as a major power is equally tough. Given the ferocity of their competition, regional conflicts may be inevitable.

Since China-U.S. relations today are highly complex and sensitive, as they involve prominent competition over Taiwan and the South China Sea, both of which concern Chinese national security and sovereignty. So U.S. strategic pressure on China will increase and military provocations will become more frequent and direct, touching China’s bottom lines. Global challenges and flare-ups in regional hotspots will also complicate Chinese foreign policy, especially thos involving the U.S., and make them even more difficult to handle.

The U.S. withdrew from the INF treaty in mid-2019 and immediately restarted research and development, as well as tests of surface-based intermediate-range missiles. It declared it woule re-deploy such missiles in Asia and Europe, and has also insisted that China participate in negotiations for a new missile treaty in order to weaken and offset some of China’s asymmetric advantages. Meanwhile, the U.S. will withdraw from the Arms Trade Treaty and the U.S.-Russia Outer Space Treaty, and it openly says it will never approve the Comprehensive Test Ban Treaty. It is accelerating its pace of modernizing and miniaturizing nuclear weapons as it attempts to press China into a nuclear arms race and hence contain China’s development.

In the Middle East, by killing a key Iranian military leader the U.S. nearly triggered a military conflict with the Islamic Republic. Bilateral contradictions will inevitably intensify. How that situation evolves will make a decisive impact on regional conditions.

Israel-Palestine contradictions surrounding the status of Jerusalem and the “land for peace” proposal have suffered a heavy blow from the U.S. decision to move its embassy to Jerusalem and is intensifying once again.

China is a major importer of Middle East oil, and as the U.S. strives to disturb the region and create ups and downs in the oil market, China will be exposed to greater economic and political pressures.

Since the political candidates of both parties in the U.S. elections are becoming more seriously inward-looking, and as populism and protectionism gain popularity, the current international order and global governance regime will become even more disordered, making it more difficult for the international community to reach consensus on such global challenges as climate change, energy security, cybersecurity and geopolitical conflicts. The world will be even less peaceful, and the probability of black swan and grey rhino incidents will rise dramatically.

The trend of globalization comes with the formation of global production chains. A worldwide consumer market, flattens the commodity production and service industries, and a strong push from the tech revolution all provide important support for continuing globalization. Globalization will not be reversed.

However, the wrangling between globalists and anti-globalists will continue to escalate. Enlarging “governance deficits” have torn apart the rules-based governance regime, remaking international rules, especially those surrounding the role of the World Trade Organization, and will be a focus of major power competition. In this year of U.S. general elections, global governance will face more severe tests on such topics as climate change, WTO reform, preservation of the global nuclear nonproliferation regime and the handling of various regional hotspots. China and the U.S. will face some difficult choices over whether to cooperate or go their own way.

To sum up, the U.S. general election this year will be a special one in American politics. Bilateral ties will see greater uncertainty, and relations will be even more difficult to handle. All of this suggests China needs to maintain strategic calm, think from a long-term perspective, adhere to principles, observe developments with a cool mind and avoid jumping to rash conclusions about certain matters as they suddenly crop up.