What Does Europe’s AIIB Entry Mean for China and U.S.? 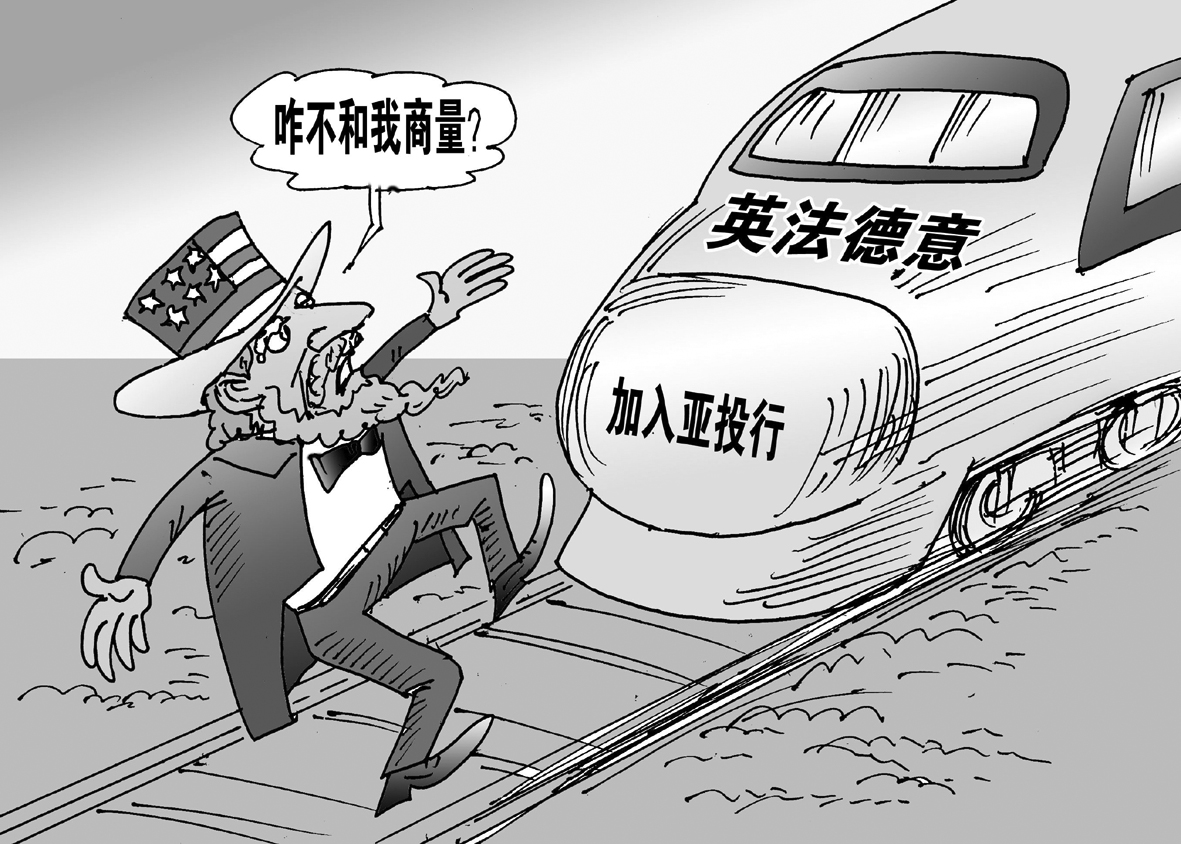 It is quite unexpected that so many developed Western nations have joined other Asian nations in an enthusiastic response to China’s Asia Infrastructure Investment Bank, an initiative that calls for the establishment of a multilateral financial institution to assist in infrastructure construction across Asia. The China-threat-theory-addicted Western media once again became excited, alleging that the development “signals the end of the American century and the inception of an Asian century” and that “China is enjoying its own Bretton Woods time.”

The Asian Infrastructure Investment Bank (AIIB) is shortened to Ya Tou Hang in Chinese, literally Asian investment bank. I don’t think the abbreviation reveals the true nature of the bank, for the intrinsic role of an “investment bank” is speculation, while the AIIB denotes support for physical economy and infrastructure.

China should seriously state that the AIIB is no different from the World Bank in its nature as an international institution, which solicits member states’ public funds for its capital. It is a public establishment rather than a market-based, speculative and profit-seeking venture; it is an international financial organization in its true sense, rather than a privately owned investment bank. Therefore, I would call the new bank Xin Ya Hang, or New Asian Bank, for short.

Some Americans believe that China created the AIIB because it wants to control the bank. That’s a groundless allegation. China does not want—and is unable—to control the AIIB, especially after European countries and other U.S. allies join in. China has done nothing more than initiate the new bank. The creative move doesn’t mean an intention, or ability, to control the bank. It only represents one instance of China acting as an international leader for the good of the world, as well as an attempt to enhance its “soft power” rather than playing the game of competing for hegemony.

China’s diplomacy is still characterized with a series of “nons.” I would call it a “non diplomacy,” which is different from the United States’ hegemonic diplomacy. On many occasions, China indicated that it “does not challenge” the existent international rules and global agencies such as the International Monetary Fund and the World Bank. In other words, it does not challenge the U.S. and EU’s primacy in the organizations.

Earlier this month at a press conference of the National People’s Congress and the Chinese People’s Political Consultative Conference, Chinese Foreign Minister Wang Yi reiterated China’s principle of not challenging the current international order and rules. As a scholar specializing in diplomatic studies, I see Wang’s statement as serious and earnest. It is true that China does not intend to challenge the existing international rules and order by initiating the AIIB, the “One Belt, One Road” program, or other economic programs.

Will the AIIB help China become the rule maker? My answer is a definite no. There’s no need to raise the question to the height of rulemaking. What China is doing at the moment is nothing more than increasing its contribution to the financial world, just as it asks for greater voting rights in the IMF, rather than increasing China’s power. Inconsistency between contribution and right is the reality we resent, but must accept.

Many Americans are overly sensitive about China. They are only too used to crying wolf, worrying that China will replace the U.S. to become the “world leader,” echoing the media’s clamor about “China’s Bretton Woods time.”

In fact, China seeks to establish a “new type of major powers relationship” with the U.S. Many people regard that as China’s bid to acquire an equal status as the U.S. in the making of international rules. The real purpose of Beijing, however, is that Washington treats China as equal and in a more reasonable way. There is no intention on the part of China to challenge the U.S.’ status.

Europe has its reasons to join the AIIB. Economically, the bank will benefit European countries. Politically, joining the bank will eliminate the possibility of China dominating it. So it is wise to choose participation rather than confrontation. China’s bid to establish and run a multilateral organization conforms to Europe’s philosophy on global management. The European Union itself is a multilateral establishment based on the members’ common will and agreements. China’s understanding of multilateralism may differ from that of Europe in a way, but Europeans generally identify themselves with multilateralist ideals.

What Europe worries about is not a China-initiated multilateralism, but rather a China-controlled multilateralism. European countries are traditional financial powers who have dominated the IMF for 70 years. Their participation in the AIIB would forestall any possibility of “China domination.”

With so many Western countries involved in it, the establishment of AIIB is definitely a blessing for the U.S., for their joining in the new organization should have helped remove Washington’s concerns about its hegemony being challenged. Therefore, Washington may change its attitude towards the AIIB. Then Japan will be the only major country that isolates itself from the new bank.

China has a mixed feeling about the latest development. On the one hand, the participation of Europe has rendered the AIIB an international credibility; on the other, the new institution is already over-politicized even before its official launch and operation.

Chinese President Xi Jinping will soon visit the U.S. During the summit, China will further explain its ideas on the AIIB, the “One Belt, One Road” program, and some other strategic concerns. The joining of some European countries in the AIIB will help depoliticize the Chinese Government’s motivation. In other words, by doing so these countries are telling the world that China’s contribution deserves appreciation.

The AIIB is a new-type of international financial institution that supports the global economic growth and improves infrastructure construction in Asia and other regions. It has immense potential to help improve the world’s economic management. We wish it all the success.

AIIB China-Europe Relations Major Power Relationsstions One Belt One Road
printTweet
You might also like
Back to Top
CHINA US Focus 2018 China-United States Exchange Foundation. All rights reserved. Disclaimer