The Impact of the German Election 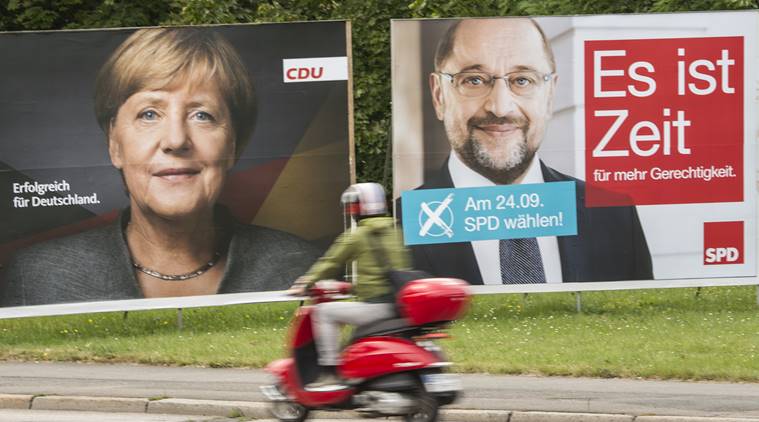 On 24 September, Germany had its quadrennial elections to the Bundestag. This year is an election year for Europe. Compared with the Netherlands, France and UK, the German federal election did not attract wide attention as people thought that the CDU/CSU led by Chancellor Angela Merkel would remain the largest party in the federal parliament. However, as the election results were announced, people suddenly realized that although Merkel had won the election, her fourth term will be more challenging than all previous three terms. German domestic and foreign affairs be affected by the election, and so will the development of the EU.

In the election, votes for CDU/CSU and for the Social Democratic Party (SPD), the two largest parties in Germany, both dropped to the lowest levels since the end of WWII. The Union Party got 33% and the SPD 20.5%. Meanwhile, far-right party Alternative fuer Deutschland (AfD) made a historic breakthrough with 13% of the vote, more than smaller traditional parties like the Liberal Democratic Party of Germany (LDPD), the Green Party and Die Linke. In other words, the AfD has not only become the third largest party in the German Parliament but has also stepped over the 5% threshold for the Bundestag. For the first time since end of WWII, a far-right party will be in the Bundestag.

The rise of the far-right or populist parties and substantial reductions of votes for traditional centrist parties reflect an evolving political climate in European countries. Britons voting for Brexit and France’s far-right National Front getting into the second round of the presidential run-off are both signs of rising anti-establishment forces.

Germany carried out important structural reforms at home and has thus enjoyed an economic and employment situation better than France and many other countries. A recent Economist article described the twelve years since Merkel became Chancellor in 2005 was described as the ”golden age” for Germany. This is one of the reasons Merkel won a fourth term. However, the European debt crisis and the refugee problem, have been used by the vocal anti-foreign far-right forces against her. Disappointed by Merkel’s refugee policy, some traditional supporters of the center-right Union Party went for the AfD this time. The center-left SPD’s influence was weakened as it had twice played the role of a smaller party in Merkel’s coalition government. As Merkel had in the previous three terms taken over some of the SPD’s policy positions, the SPD was actually in an identity crisis. In face of the brutal election results, both the CDU/CSU and the SPD have to do some deep reflection.

Over the past ten years or so, Germany’s influence in the EU has been increasing and the country has emerged as its leader. Its own strength, as well as incessant crises and decline of French influence, have pushed Germany to the forefront. When the European debt crisis and the Ukraine crisis broke out, the rest of the EU turned to Germany. Then Polish Foreign Minister Sikorski lamented that, for the first time in history, Poland was worried not about Germany’s strength but about its reluctance to use it.

Will the German election results change this?

That will depend on two factors. The first is how the future coalition government will be organized. Merkel has announced her intention to form her cabinet before Christmas. Some think Germany may have a minority government, which will seek support of smaller parties on major issues, just like in the UK. Although the SPD said it would take the opposition, it might form a grand coalition government with the CDU/CSU. The most likely scenario, however, is a black-yellow-green coalition between the Union Party, the LDPD, and the Green Party. And that cabinet will pose serious challenges to Merkel’s rule. The three parties have visible differences on many domestic and international issues, refugee policy, and EU policy in particular. In recent years, the refugee problem has deepened the domestic split and serious differences between the three parties will undermine the government’s ability to take effective measures. On major issues bearing on future EU development, the LDPD position is quite different form those of CDU/CSU and the Green Party. As such it may be quite difficult for the reform of the Eurozone desired by French President Emmanuel Macron to enjoy full German support.

GermanGerman ElectionChina-Europe Relations
printTweet
You might also like
Back to Top
CHINA US Focus 2018 China-United States Exchange Foundation. All rights reserved. Disclaimer