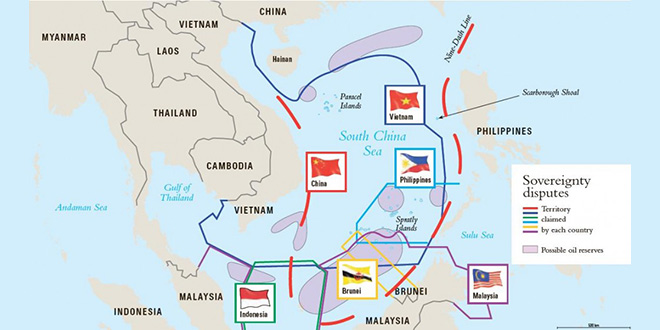 Since the end of last year, the chess game over the South China Sea has grown bigger, with more outside players, bringing the situation to a new stage on the eve of the Strategic and Economic Dialogue.

China has been a besieged target in both a “legal” battle and a “construction” battle. Vietnam and the Philippines launched legal attacks against China’s nine-dash line at the end of last year. Now they have opened up a new battlefield by accusing China of construction on islands and reefs in the South China Sea.

These two countries and the US have three main points of criticism: First, the Philippines and Vietnam only construct on existing islands and reefs while China conducts land reclamation against the Declaration on the Conduct of Parties in the South China Sea (DOC). Second, the Chinese construction disrupts water quality and coral reefs, thus having an adverse impact on the fishery resources of neighboring countries. Third, China seizes the strategic central zone in the South China Sea for air and maritime supremacy. If not effectively contained, China will go even further, they said.

China defends its effort with four arguments. The construction is first of all humanitarian, to improve the living conditions for people stationed on the islands. While China has all along obeyed the DOC, other countries had constructed and expanded islands before China did. Thus China’s action in response is only reasonable. It is also lawful as UNCLOS does not prohibit the construction of artificial islands and contains clauses on the status of artificial islands. And finally China argues there is benefit for all, saying that it is ready to provide facilities and security assurance for passing ships and offer necessary public goods for the region.

Onlookers and ‘senior consultants’ outside of the region have turned into master players in the game. The US was the first to make the turn. At the ARF Foreign Ministers’ Meeting in July last year, Secretary of State John Kerry preached to ‘freeze’ provocative moves in the South China Sea, but ran into the opposition from both China and ASEAN. The US has continued its high-profile critique of China since the beginning of the year, which climaxed with President Obama making an appearance on the scene on 22 April. He complained that China would rather use its muscle than resolving the problems through normal international dispute-settlement mechanism. It is noteworthy that the G7 foreign ministers’ meeting issued a statement on 15 April, expressing concern over China’s reclamation work as changing the status quo and increasing tension. G7 member countries ‘strongly oppose any attempt to assert territorial or maritime claims through the use of intimidation, coercion or force’ and will organize a high-level meeting on maritime security.

It was the first time for the US and West to surf the South China Sea collectively. The game situation has changed from China playing one versus several within the region to one versus more international players. On 4 May, an article in the Japanese journal The Diplomat announced that ‘US Won’t Buy China’s Pitch on South China Sea Land Reclamation’ and that ‘Beijing will face an uphill struggle in getting other states with interests in the region to let it have its way’.

Means used in the game, both diplomatic battles and military preparations, are also evolving. Since the end of last year, most disputants have been trying to calm the situation over South China Sea. China proposed a dual-track approach. ASEAN argued strongly against its overall relationship being taken hostage. China and ASEAN have also intensified negotiation on a code of conduct. In April, Nguyen Phu Trong, general secretary of the Central Committee of the Communist Party of Vietnam, visited China, and Chinese President Xi Jinping visited Indonesia and attended the Asia-Europe Meeting//this what we mean here?// meeting. These high-level diplomatic events offer opportunities to turn the situation around. However, the “threat” of Chinese construction in the South China Sea has also been excessively hyped in the past few months. Filipino Foreign Secretary Albert del Rosario at the ASEAN Foreign Ministers’ Meeting on April 26 and President Aquino at the subsequent ASEAN Summit both strongly pressed ASEAN to issue a tough statement condemning China, a demand that was echoed by Vietnam and cheered by the US and the West. The final ASEAN Summit statement on April 27 mentioned the Chinese construction work. In the military field, Malaysian Defense Minister Hishammuddin Hussein called upon ASEAN countries to create a joint peacekeeping force and increase mutual trust in dealing with territorial disputes in the South China Sea. In the Wall Street Journal, US 7th Fleet Commander Robert Thomas also advocated a joint ASEAN force to patrol the South China Sea against the Chinese threat. Although these so-called military preparations are still at a feeling-out stage; they may well be materialized some day.

The game posture has also shifted from one with ‘aggressive China’ to ‘aggressive US’. The ‘construction battle’ has again escalated since early May. On 11 May, Cui Tiankai, Chinese ambassador to the US, said that China had always followed the principle of ‘not attacking until being attacked’ and as such there is no need for other countries to be concerned with China’s intentions in the South China Sea. He also said that, although being doubted groundlessly, China would not reject the US and was still ready to provide service for passing American ships. It is reported that on May 12, US Defense Secretary Ash Carter ordered preparation of plans against Chinese construction in the South China Sea including flight over the relevant islets by US naval reconnaissance aircraft and entry into waters within 12 nautical miles of the islets and reefs by US military ships. On 13 May, a Chinese Foreign Ministry spokesperson emphasized that freedom of navigation does not give one country’s military aircraft and ships free access to another country’s territorial waters or airspace. She said, ‘China will stay firm in safeguarding territorial sovereignty. We urge parties concerned to be discreet in words and actions, avoid taking any risky and provocative actions and safeguard regional peace and stability.’

Thus it is clear that like many other difficult situations in the neighboring region, the South China Sea question cannot escape China-US relations. The predicament is that while China does not allow the US to intervene, the US insists on doing so, leading to escalation, which is seen as an insult by both sides. In this situation, South China Sea will for sure become a focus of the upcoming bilateral Strategic and Economic Dialogue.