On 27 October, USS Lassen entered provocatively into waters close to Chinese islands and reefs in the South China Sea in spite of repeated representations and strong opposition of the Chinese government. Occurring right after President Xi Jinping’s visit to the U.S. at the end of September, the move is very negative and harmful to China-U.S. relations. 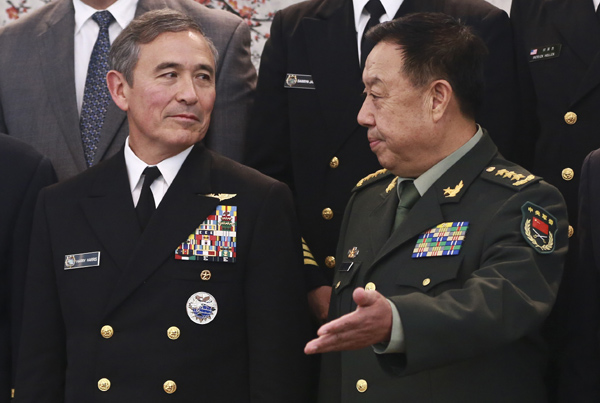 As far as I know, on the handling of South China Sea-related issues, the White House, the Department of State and the Department of Defense of the U.S. do have some different views. The DOE and USPACOM are the toughest, which is attributable to their departmental interests as tension in the South China Sea helps them get more budget and new weapon systems.

There might be two possibilities. It may have been a symbolic posture to satisfy the China bashers. It may also reflect a will to turn the military operation into a regular occurrence, with gradual increase in scale and intensity. Both are provocative. But the latter case will greatly increase the security risks of China-U.S. frictions in the South China Sea. China will be waiting to see exactly what the U.S. is after.

Meanwhile China must get itself ready for a long-term struggle and a game contest versus the U.S. over the South China Sea in case the U.S. pursues the second path. The US defended its action on ground of freedom of navigation. It is well known that the South China Sea is one of the busiest sea lanes in the world, used by China, Japan, ROK and many other countries in the world, including the U.S., and to keep it open is in the best interest of all countries. Actually the shipping lane has never been adversely impacted in spite of disputes among various countries over islands, reefs and maritime rights and interests.

In fact, protracted close-range military reconnaissance operations by the U.S. are the fundamental reason behind the disagreement on freedom of navigation. As the U.S. actions endanger its national security, China naturally opposed to them. This time through military action in the sea areas around the islands that China has expanded through construction, the U.S. has further intensified the two countries’ disagreement over the right to freedom of navigation.

Compliance or non-compliance with the UN Convention on the Law of the Sea (UNCLOS) aside (with inherent ambiguities in the Convention, China and the U.S. have rather significant differences in their understanding and interpretation), clearly this move of the U.S. will only send a very negative signal to the Chinese people and the People’s Liberation Army (PLA): the U.S. will take China as an adversary or even a potential enemy. Some American experts suggested that the PLA may also go to the waters close to the U.S. territory. But if the PLA also scouts around the U.S. whenever it wants, wouldn’t that drive China-U.S. relations to a Cold War?

The U.S. has been asking China to clearly define the nine-dash line and explain what constitutes its own territorial waters and exclusive economic zone in the South China Sea based on the typographic features of the islets and reefs. At present the dispute surrounding the South China Sea is rather complicated. China has disputes over islands, reefs or maritime rights and interests with five Southeast Asian countries (with Indonesia, China has only dispute over maritime rights or interest). Given this reality, China has not set its territorial sea base points or drawn the baseline for islands and reefs in the South China Sea, instead remained ambiguous to a certain degree. This in fact demonstrates that China is restrained and sincerely hopes to resolve the disputes through peaceful dialogue.

But on the other hand, the basic meaning of the nine-dash line is clear, as China has repeatedly declared. First, within the nine-dash line, China has indisputable sovereignty over the Nansha Islands and its surrounding sea. Secondly, China is entitled to the maritime rights and interests provided in the UNCLOS. Thirdly, China has certain historical rights over the sea area, and fourthly, the sea lane within the nine-dash line is completely free and unblocked. During his visit to the U.S., President Xi also made it clear that constructions on Nansha Islands are not targeted against or influence any country and that China has no intention to militarize the islands. In short, China’s policy is to firmly safeguard its territorial sovereignty and to maintain peace and stability in the South China Sea. China is ready to achieve cooperation by shelving disputes and engaging in joint development and to ultimately resolve disputes through peaceful dialogue so that the South China Sea will be a “sea of peace, cooperation and friendship”.

It must be pointed out that the U.S. has been expanding its military presence in the South China Sea in recent years, including continuing close-range military reconnaissance operations against China; inserting itself in sovereignty disputes of the area, selling weapons to Vietnam and other countries, strengthening its military alliances in the region and regaining access to military bases in the Philippines, as well as calling for joint patrols with Japan and other allies from outside of this region. The recent move by USS Lassen represents a readiness to have direct military friction or confrontation with China. Nevertheless, the U.S. blamed China for interfering in its exercise of freedom of navigation and accused China for “militarizing” through island constructions. These accusations don’t hold any water. It is the U.S. whose actions have prompted the trend of militarization in the South China Sea.

On the question of South China Sea, China and the U.S. indeed have serious differences, which should be addressed through dialogue after all, rather than through armed conflict or military confrontation. Given the emerging risks, the two countries may need “quiet diplomacy” rather than sensationalizing the situation.

Moreover, the two countries signed last year a MOU on the Notification of Major Military Activities Confidence-Building Measures Mechanism and a MOU on the Rules of Behavior for Safety of Air and Maritime Encounters, and revised them recently. So long as both sides adhere to the spirit and rules of these mechanisms, they should be able to avoid unexpected incidents such as fighting out of miscarrying the situation. However, if the U.S. engages in more provocative actions in the future, such as dispatching warships and aircrafts at a higher frequency, venturing into more sensitive waters, increasing the scope of its operations or resorting to more threatening behaviors, it will be met with fierce opposition from the Chinese people and stronger military response. By then, the risks of conflict will grow considerably.

China has made various contingency plans against provocations by U.S. warships or aircrafts near Chinese islands or reefs in the South China Sea. When necessary, China is ready to engage in a long-term contest with the U.S. by various means in a resolute effort to safeguard its national sovereignty and maritime rights and interests. At the same time, China will also be sober-minded so as not to land in the trap created by the U.S. out of escalating sovereignty disputes in the South China Sea. China will also try its best to avoid any major military crisis or conflict with the U.S. in the South China Sea. If China succeeds in all of its efforts, the U.S. will not get what it wants or achieve whatever objective it has in the mind.