Beyond Battle of Marawi: Duterte needs both U.S. and China 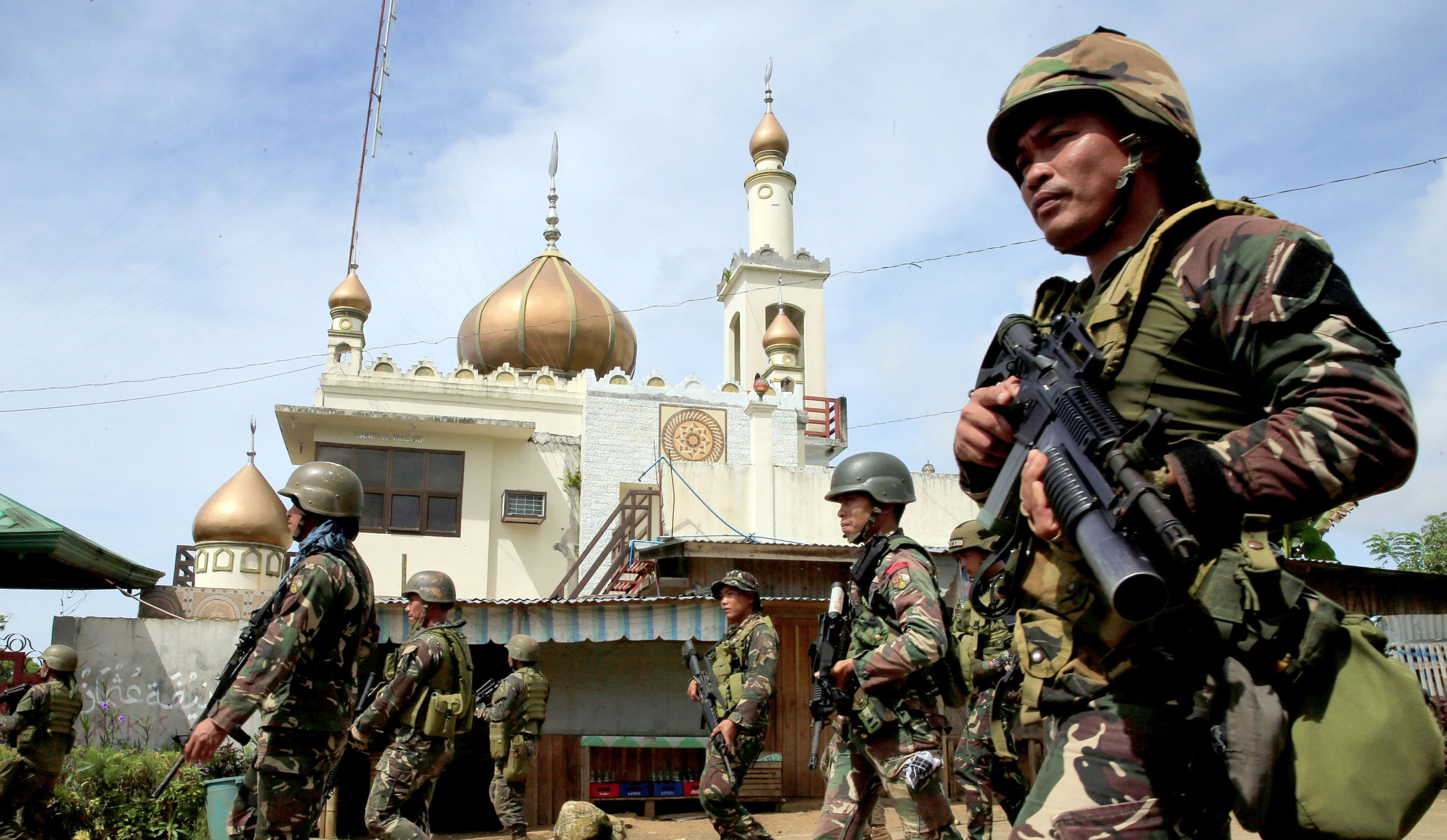 Government troops walk past a mosque on May 25, 2017, before their assault with insurgents from the so-called Maute group, who have taken over large parts of Marawi City, southern Philippines. (Reuters)

After five months of intense firefights between government troops and Islamic State (IS)-affiliated militants, the Battle of Marawi is now effectively over. In late-October, Philippine President Rodrigo Duterte triumphantly declared “Marawi city liberated from the terrorist influence” after the Armed Forces of the Philippines (AFP) managed to neutralize the leadership of IS movement in the country.

The AFP, as well as forensic investigation by the Federal Bureau of Investigations (FBI), has confirmed the death of Isnilon Hapilon, the designated Emir of the IS’ prospective Wilayat (governorate) in Southeast Asia. The Maute brothers, the movement’s chief military commanders, have also been killed. This marks a huge setback for the extremists in the region.

As many as 800 militants have been reportedly neutralized by government troops, who have also managed to saved up to 1,700 hostages held captive by the militants. The authorities, however, are yet to fully confirm the death of Mahmud bin Ahmad, the Malaysian financier who served as the conduit between IS command in Raqqa and the Filipino militants.

Yet, the specter of terror in Mindanao is far from over. The Philippines may have managed to contain, at least for the meantime, the prospect of an IS stronghold in its backyard, but religiously inspired extremism and violence will continue to haunt Mindanao for the foreseeable future. Nonetheless, Duterte can count on continued support from traditional allies, the United States and Australia, as well as new strategic partners, Russia and China, to keep the IS at bay.

To be fair, Duterte’s triumphalist rhetoric has some basis. The death of Hapilon and Maute brothers is no small strategic feat. Over the past decade, Hapilon, the leader of the Sulu-based Abu Sayyaf Group (ASG), repeatedly eluded Philippine authorities. It was precisely the failed raid on his suspected safe house (May 23), which triggered the siege of Marawi, the Philippines’ largest Muslim-majority city, by a legion of militants. The Lanao del Sur-based Maute Group (MG) led the whole operation.

Hapilon’s recent decision to migrate to Butig, the stronghold of the MG in Lanao Del Sur, marked the beginning of a potent coalition of extremist groups from divergent -- and often competing -- ethnic backgrounds. The ASG is largely composed of Tausug Filipinos from maritime southern regions of Mindanao, while other extremist groups such as MG and Bangsamoro Islamic Freedom Fighters (BIFF) hail from the land-based Maranao and Maguindanao people in central Mindanao.

The Maute brothers, Omar (killed along with Hapilon) and Abdullah (killed in September), in turn, formed the military leadership of the IS movement in the Philippines. The death of the Maute brothers, who boasted advanced military and theological training in the Middle East, has crucial strategic implications. It has effectively undercut the capacity of IS movement in the Philippines to establish a full-fledged Wilayat in the southern island of Mindanao, Duterte’s homeland.

Furuji Indama, former deputy of Hapilon’s position, is largely seen as the leading contender for leadership of the IS movement in the Philippines. It is highly doubtful, however, whether he can mobilize a similarly robust and lethal coalition as his charismatic and politically-astute predecessor.

Though their hopes of establishing a Wilayat may have been quashed for now, the IS movement in the Philippines will likely focus on “spectacular terror attacks” to project strength and resilience.

We saw this in the case of the IS command in late-2014, when the transnational terror group decided to shift to high-profile and bloody operations in Europe and across the world just as it suffered military setbacks in its heartland across western Iraq and eastern Syria.

In early-November, global leaders, including the United States’ President Donald Trump and President of the European Council Donald Tusk, are expected to descend upon the Philippines for the East Asia Summit. No wonder then, the country is on high security alert for potential terror attacks against high-profile target.

Eager to nip the IS Wilayat in the bud, the U.S. and Australia have been providing real-time counter-terrorism intelligence, training and equipment to the Philippines. To ensure maximum cooperation, they have quietly sidelines their earlier criticisms of Duterte’s human rights record, especially his scorched-earth crackdown on suspected drug dealers.

Thanks to Duterte’s strategic diversification policy, he managed to also secure assistance from China and Russia, who have offered training, intelligence and equipment to the Philippine military. The challenges ahead, however, are daunting, and both new and old strategic partners are vital to overcoming them.

The Battle of Marawi has displaced as many as 600,000 individuals, who may have to return to nothing but rubbles amid the massive devastation of the once-prosperous city. The government has allocated up to $400 million to reconstruction efforts, but there is little assurance that this will be anywhere near enough to secure a speedy and effective reconstruction of the heavily destroyed city.

Any major delay, inefficiency and/or corruption scandal during the reconstruction efforts could easily fuel a new cycle of grievance, disenchantment and radicalization among residents. This, in turn, could provide a fertile ground for a new round of extremist mobilization.

Thus, Duterte will have to use his political capital to pass the revised Bangsamoro Basic Law, the legal framework for the establishment of an autonomous Muslim-majority sub-state entity. The president, however, will have to overcome heavy opposition by the (Christian-majority) legislature and greater public on the issue.

Otherwise, the Philippines risk a new cycle of violence in other areas of Mindanao beyond Marawi. Thus, maximum assistance counter-terror as well as development assistance from both the West and China remains indispensable for the foreseeable future. The Philippines can’t simply handle this on its own, and the stakes are high for all major regional powers.