U.S. Defense Secretary Ashton Carter ended his recent multi-nation trip to Asia with a bang. In a keynote address at the November 7 Reagan Defense Forum, attended by senior U.S. military officers and prominent political leaders from both U.S. political parties, Carter placed his statements and actions in Asia during the past week in strategic context. In his words, a Pentagon priority is to “deter, and if necessary, respond to geostrategic challenges… from high-end opponents” such as China and Russia. 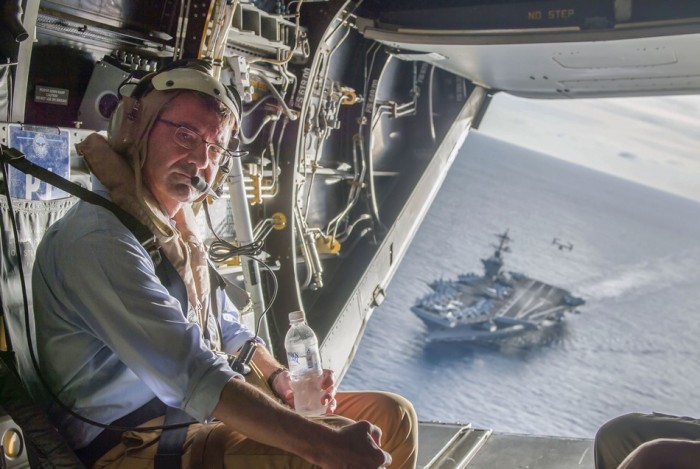 Although Carter described China as less of an immediate challenge than Russia, he saw both countries as potentially challenging the principles of the “international order that has served the United States, our many friends and allies – and yes – if you think about it, Russia, China, and many other countries, well for decades.” These principles included the “peaceful resolution of disputes, freedom from coercion, respect for state sovereignty, freedom of navigation and overflight” and other courses of conduct that have promoted peace and security in Asia for decades.

In essence, the Chinese challenge is that, as “a rising power,” Beijing is naturally “growing more ambitious in its objectives and capabilities.” Returning to the main theme that had dominated Carter’s comments and actions during the previous week, when he visited several countries for bilateral and multinational meetings and also visited U.S. military facilities and a U.S. aircraft carrier on patrol south of the disputed islands, Carter emphasized that the United States has “a fundamental stake in the security of maritime Asia, including dynamics within the South China Sea.” Almost one-third of global maritime trade transits those waters; more than $1 trillion worth of ship-borne trade goes to the United States each year. “That is why the United States is concerned with land reclamation there,” Carter explained. “And China has reclaimed more land than any other country in the entire history of the region.”

To respond to China’s massive land reclamation in the South China Sea and to avert the potential militarization of these structures, the U.S. Navy conducted another of its regular freedom of navigation operations in the region. On October 27, the U.S. Navy destroyer USS Lassen sailed within 6-7 nautical miles of the artificial structures that China has created near the Spratly Islands over the last year.

The move, which followed years of public and private calls by the United States and others or Beijing to moderate its newly assertive approach, occurred in accordance with international law and the wishes of U.S. allies and other concerned parties. The UN Law of the Sea, which the United States follows despite not being a formal treaty party, does not allow states to claim the standard 12 nautical miles of territorial waters around submerged features that human activity has raised above sea level. The U.S. joins other actors in making statements and taking actions to challenge sovereignty claims derived from artificial islands.

Chinese government officials and analysts attacked the operations provocative. Shen Dingli, Vice Dean at the Institute of International Studies at Fudan University, writes that, “The US’ bold military provocation will not only damage Sino-US relations, but also could result in the risk of conflicts in the waters if it persists.” Zhang Tuosheng, the Director of Research and Senior Fellow at the China Foundation for International Strategic Studies, called the act “very negative and harmful to China-U.S. relations.” According to Ma Shikun, a senior commentator at the People’s Daily, the Chinese people, who are understandably affronted by the U.S. maneuver, regards this as “a presumptuous act of bullying and hegemony.” In his meeting with Carter in Malaysia, Chinese Defense Minister Chang Wanquan warned that there was a “bottom line” to Beijing’s willingness to tolerate U.S. freedom of navigation activities in maritime areas China considers part of its national territory.

Nonetheless, Carter told Chang that the United States would continue the freedom of navigation operations. At the Reagan Forum, he stressed that the United States “will continue to fly, sail, and operate wherever international law allows” since “all the Southeast Asian nations strongly urge us to support” freedom of navigation, which has been a widely accepted principle for decades. Carter emphasized that, “It’s the Chinese land reclamation which is new” and threatens that freedom.

In addition to defending the U.S. freedom of navigation operations, Carter reaffirmed the other elements of the Pentagon’s contribution to the U.S. rebalance policy towards the Asia-Pacific: deploying more and better U.S. military assets in the region while further developing relevant U.S. capabilities for anti-submarine and electronic warfare, cyber and missile defense, and other areas. Meanwhile, the Pentagon is upgrading its plans to better deter aggressors, protect allies, “and prepare for a wider-range of contingencies in the region than we have traditionally.”

As part of this effort, the U.S is also building a stronger regional security architecture and improving the capabilities of local militaries to contribute to it through multilateral exercises and other measures. For example, the new Maritime Security Initiative aims through U.S. aid to strengthen the ability of U.S. allies and partners to exchange data to identify and overcome shared challenges.

Nevertheless, Carter reaffirmed in his Reagan Forum speech that the so-called U.S. Asia Pivot and the U.S.-supported global architecture have “never aimed to hold any nation back or push any country down…And that includes China.” The Pentagon is actively seeking “opportunities to improve understanding and to reduce risk with China,” such as through confidence and security building measures, as well as to cooperate “to address common challenges, such as piracy, humanitarian disasters, [and] climate change.”

Carter’s remarks help place the U.S. freedom of navigation operation, much criticized on these pages, in context. There is no expectation that Beijing wants to threaten Asia’s maritime transit, which arguably benefits China most of all. But recent Chinese efforts to enforce its claims to the region by building artificial islands, increasing military capabilities, and otherwise challenge the existing regional maritime order could somewhat increase the risk of deliberate conflict between the claimants and, more seriously, substantially raise the dangers of an unsought clash due to miscalculation. So China’s newly assertive stance on the territorial issue could, despite Beijing’s wishes, harm the security and prosperity of the entire world.

The United States aims to discourage this Chinese assertiveness by highlighting these risks while assuring U.S. allies that they do need to pursue panicky counter-responses such as accelerating their own land reclamation efforts or militarizing the region. The administration chose perhaps the mildest response it could, instructing the ship to avoid provocative actions such as engaging in military drills in the disputed area. “We wanted to assert our rights under international law,” an unnamed U.S. official told the media, “but not to the point where we were poking the Chinese in the eye, or where it would unnecessarily escalate the situation.”

Critics have termed the approach too mild, fearing weaknesses could embolden rather than discourage Chinese challenges. They complain that China’s behavior regarding territorial or even cyber disputes has not fundamentally improved since the Xi-Obama presidential summit in Washington this September. Media reports indicate that some in the U.S. military wanted to pursue a firmer response. Some Western experts argue that the United States should exploit China’s current economic weakness to put Beijing in its place.

It is unclear whether the Chinese economic slowdown is cyclical or secular, a transformation to the slower growth rather that has occurred in other advanced economies, including the United States and most recently Japan. China’s military potential looks set to increase even with a slower growing economy. And the refusal of defense ministers from the ten Association of South East Asian Nations to publicly criticize China’s maritime behavior at their meeting last week, despite their governments’ private urgings that the Pentagon adopt some urgent high-profile deterrent moves, likely contributed to Washington’s low-key stance.

For now, U.S. policy prudently aims to keep the spotlight on Beijing’s hardening stance on territorial issues and strives to channel China’s growing capabilities in ways that promote rather than undermine regional stability.