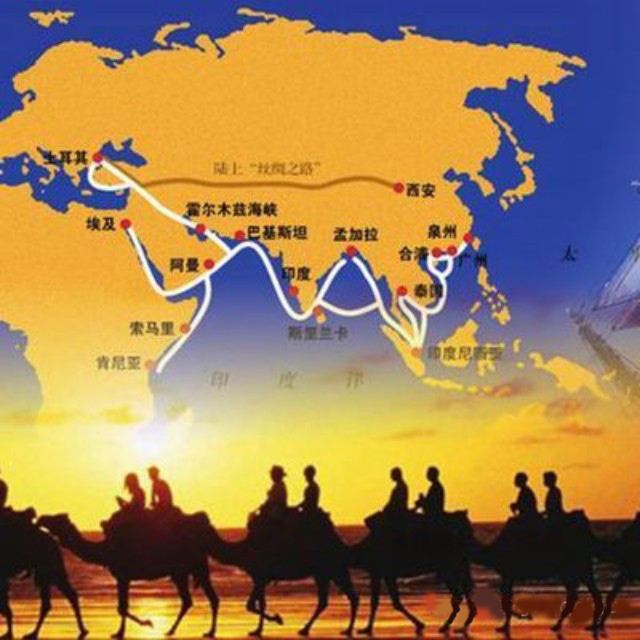 China’s “One Belt, One Road” strategy. One Belt refers to the Silk Road Economic Belt and One Road stands for the Maritime Silk Road.

With its technological advances and initial utilizations, China National Offshore Oil Corporation’s (CNOOC) rig Haiyang Shiyou (HYSY) 981 has made waves both in the headlines and in the South China Sea (SCS). As its first year in various deployment sites has signaled, HYSY 981 transcends China and affects all area nations, may well be a game changer in the South China Sea. In 2015, a new context for the South China Sea disputes is China’s new strategic initiative ‘the Maritime Silk Road,’ an ambitious proposal aimed at enhancing maritime partnership and China’s geopolitical ties with its Southeast and South Asian neighbors. How might China use HYSY 981 next under this new context? This is a big question the entire world is paying attention to.

China has already tested the water with HYSY 981 starting in the spring of 2014 with its first usage near Vietnam. This action raised strong protests not only in Hanoi, but also from the United States and several other countries. With such strong backlash, China removed HYSY 981 from the area of exploration earlier than originally planned. Shortly after this incident, 981 announced the discovery of a substantial deep-water gas field in its new drilling area 150 kilometers south of Hainan. It was estimated the new well could contain up to 30 billion cubic meters of gas. Thus far in the New Year 981 has begun a new journey on its way towards through the Malacca Strait, with a final destination planed in the Indian Ocean. In doing so it once again provoked the Vietnamese who sent planes and ships to monitor its movements.

While the Maritime Silk Road is presented as being an initiative for trade and development, its major strategic purpose is to repair China’s relationship with its neighboring Asian countries. In recent years, China’s ties with many ASEAN nations have experienced difficulties due to the South China Sea disputes. The U.S. Asia pivot has also placed a great strategic pressure on China.  Through generous investment in infrastructure development in the region, China not only wants to boost its exports and expand its ‘made-in-China’ brand, but more importantly it hopes to enhance policy communication and facilitation with neighboring countries. China has already spent heavily on the development to put this plan into action around Southeast Asia. For example, China already plans to spend nearly $2 billion upgrading the Malaysian port of Kuantan. If the Maritime Silk Road represents China’s new shift from ‘assertive diplomacy’ to a ‘periphery-first’ policy of good relationships with periphery countries, it is a question how Beijing reconciles this new policy with its usage of HYSY 981, its first deep-water oilrig.

With the technological advances 981 represents that there are multiple ways China can use the technology for diplomatic purposes, but China must learn the lessons from 981’s earlier deployment. The action off the Vietnamese coast attracted opposition, which the leadership in China must have expected, but it did not come from the sources they anticipated. The U.S. reaction to the events paralleled those of its condemnation of Russian actions in Ukraine. This abrupt change of course may signal that Beijing realizes that using HYSY 981 in a controversial area will bring trouble and may even further invite U.S. involvement in the South China Sea. The inflammatory nature of the communal disputes throughout the South China Sea allows for even the smallest actions to fan the flames of nationalism. If China continues to use 981 in contested areas there is the great possibility of more U.S. action in the waters surrounding China and Southeast Asia. Such a result would obstruct the development, trade, and security network that China is trying to achieve with its maritime Silk Road.

As another option, Beijing can continue to use 981 for natural resource exploration on its own in less controversial areas, just as it has already off of Hainan. Thus far in 2015 it appears this is China’s plan for the moment. Even though the solo exploration in less controversial areas sounds like a safe choice for Beijing, this approach would not help to reduce tension in this region. Additionally, it may further stimulate other claimants to accelerate their resource extraction in the South China Sea and cause an exploration race among them. In this instance Southeast Asian nations will certainly seek closer collaborations with Western or Russian companies as they do not possess the necessary technologies themselves.

Another possibility is China can change its way of thinking on its use of 981 by presenting the prospect of joint development. China has tried to initiate such joint projects before without successful reciprocal action, but now with 981 such ventures may finally be realistic. This would eliminate the need for Southeast Asian nations to work with Western or Russian companies on resource extraction and instead work with China. The shared development costs and revenue ensure that all states are inclined to maintain order. Joint development will not solve or end the island and sovereignty disputes in the South China Sea, but it would allow the chance for these governments to work together with China rather than countries from outside. It would also foster trust between China and these countries and help to alleviate tensions in the South China Sea. HYSY 981 thus can serve as “China’s floating diplomacy” in its efforts to attain its maritime Silk Road strategy of increasing its security by repairing ties with regional countries and linking China’s production capabilities through Central, Western, and Southeast Asia, and Africa. While many observers view HYSY 981 as a troublemaker in SCS, it is also possible that 981 can create a new opportunity for collaborations in the South China Sea.

If China really wants to improve its relationships and mend territory issues with its maritime Silk Road strategy, using 981 in a creative and constructive manner may be something Beijing should consider.