How to Resolve the Korean Conundrum 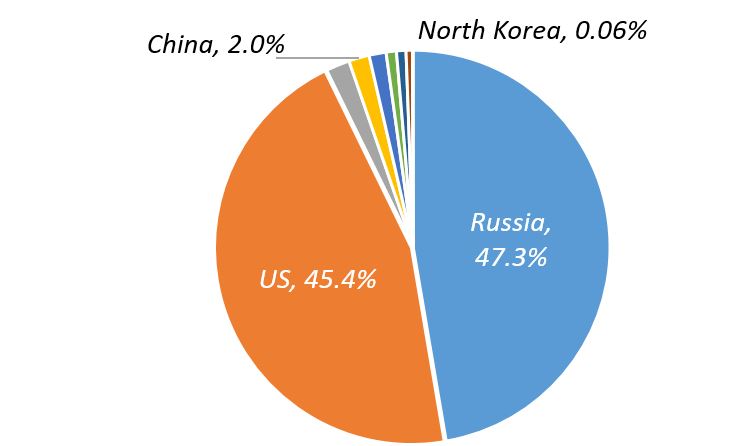 As the US policy strategy has failed in the Korean Peninsula, ominous scenarios cast a shadow over the region - and the chance for peace.

Recently, U.S. UN Ambassador Nikki Haley called for “the strongest sanctions” to pressure North Korea into giving up its nuclear arsenal “before it's too late.” In a sense, it is already too late. Decades of U.S. policies have strengthened Pyongyang’s determination to exploit the deterrent value of its nuclear arsenals. That is not to say that the game is over - only that it is time to play a different game.

Ever since the 1953 Armistice Agreement, Washington has seen North Korea as a “rogue state.” Even with the Soviet Union, Washington supported “peaceful coexistence” - with North Korea, only a “temporary ceasefire” - which has nurtured fears of imminent intrusion in Pyongyang.

In the postwar era, both China and North Korea opted for socialism. But when Deng Xiaoping opted for economic reforms and opening-up policies, Kim Il-sung (1972-94) chose precisely the reverse; a self-reliance (Juche) doctrine that translated to political consolidation and international insulation.

When Kim Jong-il (1997-2011) succeeded his father, he chose not to reform the economy and kept the country closed. While the West celebrated the “end of history,” Pyongyang was obsessed with the U.S. led “big bang democracy” in Russia and the consequent Great Depression. It served as a compelling negative demonstration effect.

For years, Beijing had encouraged Pyongyang to emulate Chinese lessons in economic reforms. Kim Jong-il listened, but initiated few reforms. Kim Jong-un (2012-) is a different story. In a televised 2013 New Year’s address, he advocated "a radical turn in the building of an economic giant on the strength of science and technology by fanning the flames of the industrial revolution in the new century.” These economic efforts should “be manifested in the people’s standard of living.” In the Obama White House, it was seen as just another ploy.

Instead of rapprochement, Washington pushed for a Terminal High Altitude Area Defense (THAAD) anti-ballistic missile system in South Korea. THAAD would kill two birds with one stone: it would subdue Pyongyang and it would contain China. The stance was predicated on President Park (who would soon be impeached), a “realistic” Kim Jong-un (who has not given in), accommodating Beijing (not President Xi Jinping’s firm leadership) - and an imperial White House that would “speak softly but carry a big stick” (until the failure of the Clinton campaign).

In a year, all these assumptions collapsed. In the Korean Peninsula, the new status quo offers potentially disastrous scenarios but also a way out.

As Seoul is trying to cope with North Korea’s nuclear blackmail, it is amid a great domestic shift. In March, Park Geun-hye, the conservative daughter of South Korea’s former strongman Park Chung-hee was impeached for corruption. In turn, Moon Jae-in’s arrival, the incumbent president who began his career as a student activist against Park’s presidency, could result in a new geopolitical momentum for peace. He worked closely with President Roh Moo-hyun (2003-2008), who pursued rapprochement with North Korea.

In his first months, President Moon has been promoting income-led domestic policies to reduce social inequality, hiking taxes for large companies and the wealthy, while trying to cool the overheated property market. While public debt has expanded, his approval ratings remain very high at around 80 percent.

In foreign relations, Moon seeks stability with China and the U.S., even if he and most Koreans have great doubts about Trump. In fall 2013, South Korea approached the Pentagon about the anti-missile system, which the previous administration opted for toward the end of the Park era. Obviously, Beijing's concern is that the real target of the THAAD is China. Moon has sought to slow THAAD's deployment. But the balancing act between Washington and Beijing is challenging, especially as Trump insists on renegotiating a bilateral free trade agreement with Korea, which remains on his watch list for “unfair currency practices.”

Moreover, President Park’s conservatives were able to postpone the repeal of the Operation Control agreement (OPCON), which allows the Pentagon - not Seoul - to control its military fate. The mission statement of the South Korea/US Combined Forces Command (CFC) is to “deter hostile acts of external aggression” against South Korea by a “combined military effort.” The CFC is commanded by a U.S. General and it has operational control (OPCON) over more than 600,000 active duty military personnel both countries.

As President Rho failed to implement transfer, the latter was delayed; in turn, President Park managed to defer it to 2022. In the event of war, U.S. interests will thus override the interests of South Koreans - in their own country.

The talks over North Korea’s nuclear weapons have been lingering since they were initiated by the Clinton Administration in the 1990s. After the George W. Bush presidency and the first term of the Obama Administration, the negotiations shifted from mainly bilateral to the multilateral Six-Party Talks among the US, China, South and North Korea, Japan and Russia.

The expansion reflected progressive shifts in the world economy. Just as the G7 nations - the US, Europe and Japan - could not resolve the global crisis without support of large emerging economies. Regional conflicts that have global implications cannot be resolved by the “West” anymore. In the Six-Party Talks, some key agreements were reached for North Korea's aid and recognition in exchange for denuclearization. But since 2009, the talks have been suspended, while concern about nuclear proliferation to other strategic actors has increased.

Following false starts in talks and aborted policy postures, the White House has opted for new sanctions and building alliances against Pyongyang. Meanwhile, President Trump and Pyongyang have engaged in the kind of rhetoric that has not been heard since the Cuban Missile Crisis. Recently, President Vladimir Putin stated that the U.S. strategy under Trump, Obama, Bush - forcing North Korea to give up its nuclear program - has conclusively failed.

Since Pyongyang believes that its nuclear arsenal is the best deterrent against U.S. invasion, which President Trump’s “fire and fury” threats have only reaffirmed, it is now less likely to reconsider its nuclear stance.

From Pyongyang’s perspective, U.S. threat is existential, extending from regime plans that would top the Kim Jong-un leadership to a limited nuclear strike that threatens the entire nation - as precipitated by the THAAD system.

Undeniably, the timeline of North Korea’s intensified nuclear and missile tests correlates with efforts to sustain THAAD and joint US-South Korean war games in the region.

While Washington has never had diplomatic relations with Pyongyang, China has been North Korea’s close, though an increasingly ambivalent ally. The conditions that once gave rise to the partnership have progressively diminished. Nevertheless, both Koreas are located in close proximity to the mainland, which remains vital to Beijing.

In Washington, Beijing’s role is regarded as invaluable to contain Pyongyang’s nuclear weapons and ballistic missiles, to prevent nuclear proliferation, to enforce economic sanctions, and to support North Korean refugees that cross into China. But Beijing does not see itself as the enforcer of U.S. foreign policy, particularly one that it considers misguided.

On September 3, after North Korea claimed that it has successfully tested a hydrogen bomb designed to fit into an intercontinental ballistic missile (ICBM). The U.S. Geological Service and the China Earthquake Administration recorded a 6.3 magnitude earthquake as a result of the detonation. It was followed by a 4.1 magnitude quake, due to a suspected cave collapse resulting from the explosion. Chinese scientists warn that North Korea’s nuclear test site is at risk of imploding, which has a potential for a massive environmental disaster.

Neither Chinese nor South Korean policymakers want another Fukushima and a massive humanitarian crisis within their borders.

So what can be done and what is likely to happen next? There are a few potential scenarios, fewer probable ones - but only one that’s sustainable.

Walk the war talk. Recently, US Secretary of Defense Jim Mattis threatened North Korea with an “effective and overwhelming military response.” But in the Korean Peninsula, hostilities cannot be limited to a conventional conflict. Under threat, Pyongyang will opt for a nuclear strike, even if that would result in massive devastation. It would be a Pyrrhic victory.

Hollow rhetoric. If the Trump administration will continue to promise shock and awe but won't deliver any, it will risk being perceived as a paper tiger. Moreover, as Pyongyang is likely to continue its tests and target provocative destinations vital to South Korea, Japan and the U.S., the THAAD would be perceived as an expensive but useless deterrent.

Broader sanctions. As Washington resorts to sanctions, it is now also trying to corner China by extending sanctions to Chinese companies. While China accounts for 90 percent of trade with North Korea, much of the remaining 10 percent can be attributed to India, the Philippines, Taiwan and France. If they are not included within the sanctions, the latter will be seen as containment against China. If they are included, the White House will frustrate its allies.

Peace agreement. While there are all kind of short-term scenarios, there is only one longer-term option. As the stakes mount for regional devastation, so do the chances for a peace agreement. It would be the most effective way to subdue North Korea’s nuclear stance over time. As long as it remains threatened, Pyongyang will rely on its nuclear strategy. But if that threat is defused, nuclear scenarios will be undermined.

A peace treaty would mean reduced U.S. presence in the region, which has been highly objectionable to Washington. However, despite its hawkishness, the Trump administration does not see itself as bound by previous defense arrangements. In Beijing’s view, a peace agreement would pave way for pacification and stability, delimit a nuclear threat in the region, while North Korea’s sovereignty would prevail.

In August, former U.S. President Jimmy Carter, who has negotiated with several North Korean leaders, noted that, for a long time, Pyongyang has sought a “peace treaty to replace the [1953] ceasefire.” In his experience, North Koreans want peaceful relations with the U.S. and regional neighbors but are convinced that Washington is planning a preemptive military strike against their country. In view of U.S. record of regime changes, that's not a futile concern.

A true peace agreement would have to be a bilateral agreement with two sovereign Koreas - not one imposed by Washington, or by nuclear blackmail.

Washington would have to accept North Korea as a nuclear power. As North Korea accounts for only 0.06% of global nuclear forces, that translates to affirming realities.

After all, today the U.S. and Russia continue to maintain the bulk of nuclear arsenals, but other nations - including India, Pakistan, China, France, UK, Israel - have their own and, in the future, proliferation is likely to continue.

In the 21st century, sustained peace in the multipolar world is not ensured by restricting nuclear capability to two or half a dozen nations, but by collectively- monitored certainty that nuclear proliferation will be limited for peaceful purposes only.

The commentary is part of his SIIS project "China in the Era of Economic Uncertainty and Geopolitical Risk." For his global advisory activities, see: http://www.differencegroup.net