No Magic in Nuclear Buildup 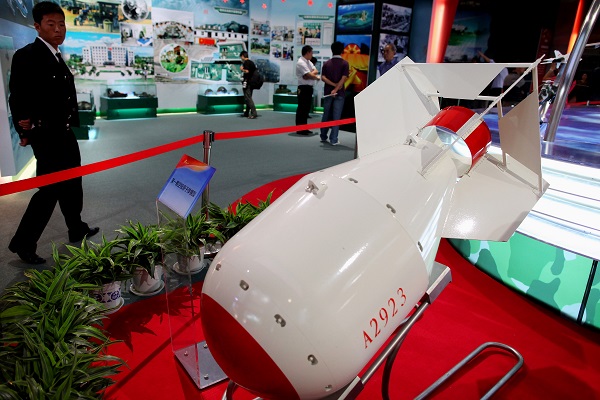 A Chinese tabloid editor recently proposed that China should rapidly expand its nuclear arsenal to 1,000 weapons, so as to cope with new security threats. The suggestion stirred the pot and had broad repercussions at home and abroad.

To determine whether China should expand its nuclear arsenal quickly and substantially, one first needs to look at the overall background of the evolution of the international nuclear stockpile. In the three decades following the end of the Cold War, of the five countries that legally possess nuclear weapons under the Treaty on the Non-Proliferation of Nuclear Weapons, the United States, Russia, Britain and France have all reduced the number of nuclear weapons in their possession to various degrees. The United States and Russia have carried out significant nuclear reductions; Britain and France, while cutting numbers, have also reduced the types of nuclear weapons. Britain promised it would cut the number of its nuclear weapons to within 180 in the next few years.

China once had the smallest nuclear arsenal of the five nuclear powers. But to ensure the effectiveness of its deterrence in a complex security environment, it has made steady efforts to modernize the arsenal.

According to researchers from the Federation of American Scientists, China’s current nuclear stockpile may have grown to about 320, probably making China the third-largest nuclear power after the United States and Russia.

In signing the NPT, China and the other four nations made a solemn and legally binding commitment to actively engage in nuclear disarmament negotiations and eventually eliminate nuclear weapons. That commitment is a necessary condition for the non-nuclear weapons states, which constitute the vast majority of the international community, to be willing to forsake their right to develop nuclear arms.

However, as major power competition intensifies, current nuclear arms control mechanisms have been weakened. At the same time, non-nuclear weapons states are increasingly dissatisfied with the slow progress of nuclear disarmament by the nuclear powers, so much so that they completed negotiations on another pact —the Treaty on the Prohibition of Nuclear Weapons — in 2017.

From the perspective of national security, what constitutes a sufficient nuclear arsenal for a country is a subject that requires professional and scientific expertise. During the Cold War, China was simultaneously confronting both the United States and Soviet Union. Each of those countries had more than 10,000 nuclear weapons at the time. China, however, was able to safeguard its national security with a limited nuclear capability. Today, it has a nuclear force that is comparable to other major powers in a number of technological aspects, and the Chinese nuclear arsenal’s survivability and capabilities for counterattacks are far beyond what they were decades ago.

To understand how big a nuclear arsenal China should maintain requires systematic and comprehensive analysis of the various weapons’ capabilities from the perspectives of robustness, mobility, rapid response and defense penetration. It also requires an analysis of potential rivals’ technologies for reconnaissance, preemptive strikes, damage appraisal and missile defense, as well as potential weaknesses and vulnerabilities in those areas. It is unlikely that any sudden or drastic change in these factors will take place in the near term. Thus, there is no need for China to rapidly expand its current nuclear arsenal.

No matter how financially strong a country is, there is always a limit to its military budget. Before making critical national defense decisions, countries must conduct rigid, systematic studies on how to coordinate their military investment with overall national development, how to modernize their nuclear arsenals while developing conventional military capabilities in a balanced manner, how to secure inputs in new military technologies and how to make efficient preparations for military conflicts oriented toward future forms of war.

Chinese defense policy experts and professionals have long been working on these issues. They can and should play a greater role in informing the general public and reducing concerns.

The worsening of U.S.-China relations has significantly increased the threat perception of the Chinese public toward the U.S. and its strategic intentions. Many worry that U.S. policy toward China will be more reckless and more conducive to risky military action. They fear that a small nuclear arsenal would not be sufficient to respond effectively to more serious military provocations and would put China at a disadvantage in facing a full-scale showdown.

Of course, all nuclear powers’ policies on the development and use of nuclear weapons are designed for worst-case scenarios. Even if the two sides came to the worst of the worst situation and faced all-out war today, China would be able to ensure the survival of sufficient nuclear weapons for an effective counterstrike. Under this reasoning, it would deter a nuclear war and prevent the country from suffering total destruction.

The development of China’s nuclear forces in past decades has always been based on such worst-case considerations and is therefore sufficient even when U.S.-China relations are on a downward trajectory.

It is even more difficult to draw simple conclusions about whether a larger nuclear arsenal would be more effective in curbing an adversary’s tendency to wage conventional war or exert political and economic pressure on China.

Over the years, nuclear policy researchers in various countries have conducted a great many empirical studies, employing historical data and quantitative analysis, on the effectiveness of large nuclear arsenals as a means of conventional coercion and diplomatic leverage. The majority of the studies found that the size of a nuclear arsenal doesn’t necessarily affect a country’s capability or effectiveness in exerting conventional military or political-diplomatic leverage.

They also indicated that once a nuclear-armed country acquires the capability for retaliatory nuclear counterattack, its ability to manage the escalation of war may be affected by the types of its nuclear weapons and its overall strategy, but there is no obvious correlation with the size of its nuclear arsenal per se.

Finally, there is a popular view among the Chinese general public that a large nuclear arsenal would earn China the respect of the international community. But there has been little thorough examination of this claim and no specific distinction between the two different concepts of respect and fear.

At a time when an international norm against nuclear proliferation is already in place, a major expansion of nuclear weapons may bring more fear than respect. As its conventional military strength surpasses all other major powers except the United States, China would find it difficult to win international understanding and respect if it significantly builds up its nuclear forces.

Generations of Chinese leaders have repeatedly promised that China will never become hegemonic, even after it becomes strong. Whether or not China vigorously expands its nuclear arsenal may become a practical barometer for the international community to judge whether China is holding true to its promise.

China is approaching the center of the world stage, and the concepts and values embedded in a “community of shared future for humanity” wouldn’t and shouldn’t allow it to follow the old paths of hegemony and power politics.

Nuclear SecurityMissile DefenseDefense Budget
printTweet
You might also like
Back to Top
CHINA US Focus 2023 China-United States Exchange Foundation. All rights reserved.