Resolving the THAAD Issue for the Benefit of All Concerned 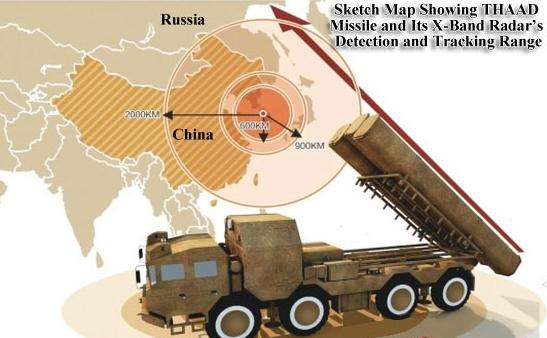 As North Korea's nuclear program has developed rapidly in recent years, the concerns of both South Korea and the US about North Korean missile attack capabilities have also increased. This is the first reason for the US and South Korea to deploy the Terminal High Altitude Area Defense (THAAD) missile system in South Korea. Although THAAD cannot defend the Seoul area, it can have some effect in defending against medium-range missile attacks from North Korea, as well as in protecting US military bases in South Korea and the entry routes of US forces. Second, the US is concerned about the development of ballistic missile capabilities in China, and can observe and monitor them by deploying THAAD in South Korea. To be sure, the US has not said anything about this. For many years, the US and Japan have been developing a joint missile defense system in East Asia, and they hope that South Korea will join them.

China adamantly opposes the deployment of THAAD. Beijing has three major concerns. First, it is concerned that having THAAD in South Korea could weaken China's second-strike capability and destroy strategic stability between China and the US. Second, it worries that THAAD is the first step toward South Korea joining the US-Japan joint missile defense system. And third, it is concerned that the three countries – South Korea, the US, and Japan – will develop a military alliance among them via the deployment of THAAD. This will seriously destroy the military balance in the region. China's concern about THAAD's technological capabilities is primarily the X-ray AN/TPY-2 radar system it employs, which, if directed at China, would provide a surveillance system for missiles launched within a radius of 1,500 to 2,000 kilometers. This will speed up the forecasting time of the US National Missile Defense System (NMD) and significantly increase the missile-intercept rate.

As South Korea and the US pushed ahead with the early deployment of THAAD, tensions between South Korea and China grew even more, with relations between them retreating rather than developing. Dialogue between South Korea and China has been cut off, confrontation in public opinion has occurred, economic and cultural relations have been severely damaged, and the strategic cooperative partnership between the two countries has faced challenges never seen before. It is clear that this situation is not beneficial to the overall long-term interests of both countries.

The first prospect is that South Korea stops THAAD deployment and eventually withdraws the missile system from South Korea. Through this, the conflict would be thoroughly resolved. Friction between the US and China on the Korean Peninsula would be significantly eased, and the relationship between South Korea and China would return to a healthy developmental path.

The second prospect is that while South Korea and the US keep the deployment of THAAD at the current level, China takes necessary defensive countermeasures, and the conflicts of interest on both sides are relatively well managed. In this situation, the outbreak of a military crisis between the two sides could be avoided, and there is a possibility that mutual trust between the US and China as well as South Korea and China would recover to some extent. South Korea-China relations would also gradually improve and develop.

The third prospect is that South Korea and the US do not take into account China’s serious concerns at all and continue with THAAD deployment, pushing China to inevitably react more strongly, leading to a sharp confrontation and heightened tensions. If this prospect actually were to come to pass, friction between the US and China would become even more serious, and South Korea-China relations would face a full-scale outbreak of tension.

The wisest and most proper choice for China, the US, and South Korea is surely the first prospect. The second prospect is also decent, where disagreement is effectively managed. The third, however, should be averted at all costs. So, what should the three parties do? I propose the following:

First, the three countries should have the same evaluation of the situation. Realization of denuclearization and peace on the Korean Peninsula should be the priority, and they should avoid allowing THAAD to become a serious obstacle to achieving common goals. The major objective of South Korea and the US in deploying THAAD is for defense from North Korean missile attacks. However, if relations with China are gravely aggravated and efforts to realize Korean denuclearization founder, the means and the ends may be reversed. Persistent deepening of North Korea’s nuclear program is more threatening to US national interests. Thinking about THAAD under the common objective of denuclearization of the Korean Peninsula complies with the common interest of China, the US and South Korea.

Second, both the Chinese and South Korea-US sides should respect and understand the concerns that each has with regard to security.

Third, suspension of THAAD deployment is crucial. Recently, the administration of South Korea’s newly elected President Moon Jae-in decided to tentatively suspend the deployment of THAAD, and to follow the National Assembly ratification procedure regarding this issue. Such a decision should be welcomed, because it improves the situation and alleviates tense relations, as well as buys time to find a method to solve and manage the problem. The US should support the South Korean government’s latest decision regarding the deployment of THAAD. The tentative suspension of the deployment should be seen as a vital measure to revive the North Korean nuclear dialogue, and to strengthen cooperation with China and Russia regarding denuclearization of the Korean Peninsula. If a dialogue regarding the North Korean nuclear program takes place, the US and South Korea should consider the tentative suspension of THAAD deployment to be maintained over the long term.

Fourth, the three countries should put confidence-building measures on the agenda in the near future. Before the THAAD problem is solved, the US and South Korea should guarantee China regarding security. Here are a few examples: The US and South Korea can officially declare that THAAD is not targeting China, and can agree to build a sort of inspection mechanism regarding such a declaration. Also, South Korea can proclaim that it will not join the regional missile defense system of the US and Japan, and instead develop an independent missile defense system. If the North Korean nuclear program is frozen, and the North Korean nuclear problem is solved, the US and South Korea should freeze THAAD deployment and eventually completely withdraw the missile system. As a response to this, China can approve of certain aspects. For instance, measures of vigilance and counteraction meant to deal with THAAD deployment can be maintained within a moderate scope and necessary range. Also, as the US and South Korea temporarily suspend, freeze, and withdraw THAAD deployment, China can alleviate, tentatively suspend, and further completely lift counterattack plans and measures which targeted THAAD.

Fifth, the US can consider technological measures. For example, the THAAD radar system can be changed, locking the radar to deployment mode and the direction of the radar, where the latter is more important, and proactively providing China with technological materials and data regarding the THAAD system. Such measures would not weaken the defensive power of the system towards a North Korean ballistic missile attack, but could actually decrease the potential threat to China, so that the concerns and suspicions of China could be alleviated.

Sixth, compared with China-US relations, South Korea-China relations are weak in the crisis-management aspect. This was made clear through the recent THAAD issue. Crisis management between China and South Korea should be greatly enhanced. Such efforts will play a crucial role for both sides to effectively control the conflicts caused by THAAD.

Seventh, China, South Korea, and the US, especially the former two, should strengthen cooperation on restarting talks on the North Korean nuclear program, freezing the North Korean nuclear program, and on sudden crises on the Korean Peninsula and military conflict. With much effort, conflicts surrounding the deployment of THAAD can be effectively contained and limited.

Eighth, all of the aforementioned efforts cannot be separated from maintaining efficient communication and dialogue. China and US-South Korea should engage in practical talks to decrease misunderstandings, manage disagreements, strengthen cooperation, and enhance mutual trust. The three should consider opening a trilateral security dialogue at an appropriate time.

In conclusion, the THAAD problem has already a largely negative influence on China-US relations and China-South Korea relations, as well as the possibility of denuclearization on the Korean Peninsula. Because the three are major related parties in the THAAD deployment issue, cooperation is crucial, and an efficient way to properly manage and solve this problem should be sought. Achieving denuclearization and peace on the Korean Peninsula should be a priority. The major concerns of all parties regarding national security should be understood, and an equilibrium point should be sought regarding security. Effectively managing concerns regarding THAAD is necessary to solve this difficult problem.

(The article is from East Asia Foundation Policy Debates.)