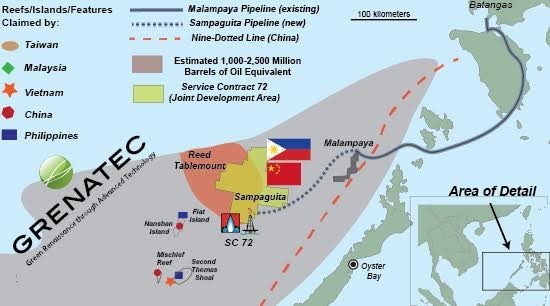 As the South China Sea’s most promising near-term developable gas field in the South China Sea, Sampaguita offers promise to set the tone for the whole sea. Indeed, it’s hardly a stretch to claim Sampaguita is the main reason the Philippines filed an UNCLOS claim, an issue for which a ruling could come in the next few months.

For years now, on and off, the Philippines’ Forum Energy has been negotiating with China National Offhore Oil Company (CNOOC) to develop Sampaguita Field, specifically an area within it known as ‘Service Contract 72 (SC72).’ But all this has been suspended pending an announcement on the outcome on the Philippines’ UNCLOS claim. In the meantime, the Philippines has declared force majeure on SC72.

Consider this: even though Samaguita lies within China’s ambit claim to the entire South China Sea, longstanding negotiations between CNOOC and Forum Energy could allow China to claim Sampaguita’s a special case. Indeed, everyone from Deng Xiaoping to China’s current leader has espoused the idea of joint development in the South China Sea. Doing so with Sampaguita, using Chinese capital and Filipino political legitimacy, could serve everyone’s interests.

Forum Energy doesn’t have the money or technology to develop Sampaguita. CNOOC does. Sampaguita also could be an ideal first loan for the China-dominated Asian Infrastructure Investment Bank. It would demonstrate the bank isn’t t just a stalking horse for incremental assertions of Chinese clout.

A bilateral deal might also render the looming UNCLOS decision moot, since the two parties reached bilateral accommodation. This would avoid a messy precedent for China, which already has flagged that it won’t adhere to UNCLOS decisions it doesn’t like. Reaching accommodations with rival claimants before they get to UNCLOS could become a template for solving similar disagreements elsewhere in the region.

Two follow up areas that come to mind are Vietnam, regarding offshore waters where China placed an exploratory rig, and Indonesia, which now vocally worries about Chinese ambit claims to waters around its valuable, gas-rich Natuna islands.

Under a possible deal, SC72 could be developed under a joint venture between Forum Energy and CNOOC, which involves extending the Malampaya pipeline. Given the two companies’ long-standing talks, it’s a near certainty they already have discussed something along these lines.

In addition to improving confidence in China in the Philippines, Vietnam and Indonesia, a deal on Sampaguita could also improve relations between China and Taiwan. Taiwan doesn’t support China’s Nine Dash Line claim and instead has vocally favored joint development of South China Sea energy assets. A deal on Sampaguita, therefore, could lead to better ties between China and Taiwan. Taiwan also has claims in the South China Sea, primarily over the island of Itu Aba, located a short distance west of Sampaguita.

Given all the above, SC72 represents a potentially big, unique, precedent-setting prize that doesn’t exist elsewhere in the South China Sea in any similar form. Working out a joint development deal could yield a host of benefits for everyone: diplomatic, financial, economic, and energy-wise.

Reed Bank’s Sampaguita Field Service may hold up 20 trillion cubic feet natural gas. If this is confirmed, it will dwarf Malampaya’s 2.7 Tcf of gas.

It could also allow China, the Philippines and Vietnam to deepen cooperation and become more open about what they’re doing on the nearby Nansha Islands to the south, as well as Mischief Reef, which has seen Chinese building and Second Thomas Shoal, which houses Philippine installations.

As a result, joint development would create moves toward integrating these facilities and forcing all sides to be more open about what they are building on the islands and why, since facilities not for economic development of energy supplies would become more visibly identifiable as military.

For its part, China has claimed its massive sand reclamation, island building and runways have been for humanitarian purposes and even, highly implausibly, for future tourism. Both are explanations not widely believed.