Republican presidential campaign frontrunner Donald Trump made hilarious and ridiculous remarks immediately after North Korea’s fourth nuclear test. President Obama may not publicly echo Mr. Trump’s view, but he may have applauded Mr. Trump’s argument privately. So here comes the next question: How will President Obama respond to the fourth test? 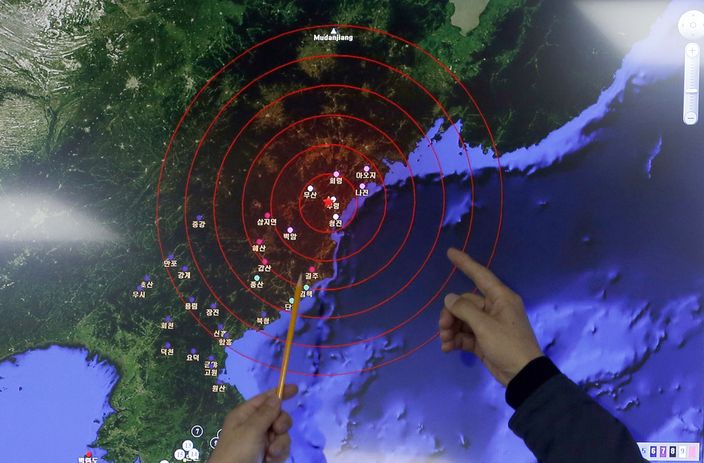 Officers from the Korea Meteorological Administration point at the epicenter of seismic waves in North Korea, at the National Earthquake and Volcano Center of the Korea Meteorological Administration in Seoul, South Korea, Wednesday, Jan. 6, 2016. North Korea said it conducted a powerful hydrogen bomb test Wednesday, a defiant and surprising move that, if confirmed, would be a huge jump in Pyongyang’s quest to improve its still-limited nuclear arsenal. (AP Photo/Lee Jin-man)

Most likely, President Obama’s follow-up moves will be developed in the next couple of days. He or his team will talk and/or meet with counterparts in South Korea and Japan to convey the message of assurance, to reaffirm the American security commitment. Possibly, some cooperative and coordinated political and economic moves against North Korea will be taken. Discussion of missile-defense deployment in Northeast Asia will come back to the table again. The routine joint military exercises with allies will be conducted next month or the month after next. The basic message is: Don’t worry, be happy, I am still here protecting you guys.

The United States will urge the United Nation Security Council to issue a statement to express grave concerns, to condemn North Korea’s provocative moves, and to urge North Korea to exercise restraint, etc. This mission has been accomplished now//before??//. Countries concerned will be asked to implement the past sanction resolutions strictly. Finally, the United States will try to cook a United Nation Security Council sanction resolution to punish North Korea economically and financially.

The United States will become pushy and demanding once again. American diplomatic envoys will flock to Beijing, urging China to do more. They expect China to do anything possible to punish North Korea harshly, and to bring North Korea down to its knees.

What else President Obama can do? Nothing meaningful is likely. It is just a routine job for him, and that pattern has been there for the past seven years. President Obama called his policy toward North Korea “Strategic Patience”. He might be patient enough, but patience is not North Korea’s game.

Why has President Obama developed and continued such a doomed-to-fail North Korea policy? It is only because he has a mindset and logic similar to Mr. Trump’s. What is that then? The laundry list could be quite long:

No.1: North Korean leaders are “madmen”, thus not rational. Really? Most North Korea observers and those American officials who were involved in the negotiations with North Koreans in 1990s would disagree on this.

No.2: North Koreans are not trustworthy, and they do not observe deals reached by negotiations. Let us be fair. North Korea implemented most of those obligations required in the 1994 Agreed Framework, while American’s performance is really questionable due to domestic political fights. North Korea’s uranium enrichment program may have violated the spirit of that deal, but literally it implemented its commitment seriously.

No. 3: North Korea, under internal and external pressure, may collapse. Similar poor judgments have misguided American policy toward North Korea for quite a long time. There were several natural disasters in last two decades and two leadership transitions and associated power shifts, and the country’s internal hardship is further exacerbated by sanctions imposed on it. However, North Korea survived, sometimes survived well, from those challenges.

No. 4: The Six Party Talks cannot work. Six Party Talks might not be efficient and effective enough to get the nuclear issue solved overnight; however, there was only one nuclear test and very limited missile tests in the duration of the talk. This platform may not be perfect, but if any long-lasting and comprehensive solution is to be reached, the Six Party Talks represent the most indispensable platform.

No. 5: The North Korea nuclear issue is China’s problem and China’s fault, and China has leverage necessary to solve this problem. No country in Northeast Asia would be better off with a nuclearized North Korea. However, China never ever encouraged or supported North Korea’s efforts to develop Weapons of Mass Destruction. China has tried every efforts possible to promote a diplomatic solution, support United Nation statements and resolutions, doing the diplomatic job privately and publicly. China has done more than could reasonably be expected — why ask for more?

A policy based on poor judgment and logic will get nowhere, and an approach that has failed in dealing with North Korea in the past is not going to succeed after the latest test.

Considering he is approaching the end of his second term, it might be a bit late for President Obama to change American policy in substantial terms. But better late than never — it is critically important to learn from past failures.

Here follow some brief suggestions for him to digest:

1. North Korea’s nuclear proliferation violated its treaty commitment and United Nations Security Council resolutions, and this issue will negatively affect this region. There is no doubt about that, but there is no consensus over how serious that challenge might be, and what might be the long-term repercussions if denuclearization is not achievable. It is time to rebuild consensus in this regard.

2. The United States has been working so hard using political isolation, diplomatic pressure, economic sanctions and military deterrence against North Korea, however, that did not work well. Might it be the time to try an alternative approach? The Obama administration also needs to think harder about whether its military deployment and other moves are conducive to promote cooperation and coordination among major powers on this issue.

4. Neither China nor the United States is ready to accept the deteriorating situation, and both countries share common goals but differ in approaches. Might it be the time for both countries to meet halfway, to work together addressing this issue instead of finger-pointing at each other?

Certainly President Obama can go ahead with his “Strategic Patience” strategy, but it is a doomed-to-fail strategy. His foreign policy legacy will be judged not only by his success in rapprochement with Myanmar and Cuba, the nuclear deal with Iran, and the withdrawal from war on terror, but also by his policy toward North Korea.