In his speech on Thursday to commemorate the 70th anniversary of the victory in the Chinese People’s War of Resistance against Japanese Aggression (1937-45) and World War II, President Xi Jinping announced China would cut the number of its troops by 300,000. 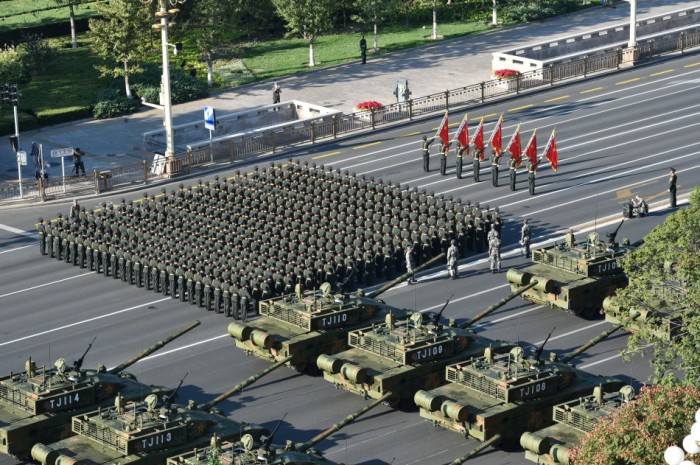 The large troop cut in the People’s Liberation Army, the 11th of its kind since the founding of New China in 1949, shows the country’s sincerity and determination to follow a peaceful development path. The gesture also reflects its positive and responsible attitude toward pushing for international arms control and disarmament.

Since the 1980s, China has voluntarily announced troop cuts several times, reducing its number by 1 million, 500,000 and 200,000. The troop cuts have been massive, for the People’s Republic of China had 6.27 million troops in its initial days which today stands at only 2.3 million. And the latest cut will further reduce the number to 2 million. For the benefit of readers, China is the only major power in the world that has been cutting its troop numbers over the past few decades.

The reduction of troops by 300,000 is a befitting response to the people who interpret China’s victory parade to commemorate the 70th anniversary of the end of WWII as a show of its “military power”. Before the parade, China made its stance clear several times that the event was not targeted at any country and its purpose was only to commemorate history, remember war heroes, value peace and look to a better future.

But Japan and some Western media outlets still tried to criticize the event calling it a “flexing of military muscles” instead of reflecting on Japan’s past brutality. In his commemorative opening remarks, Xi criticized the brutal aggression Japan launched on the Chinese people but refused to continue the past hatred by targeting Japanese people today, Nikon Keizai Shimbun said in a Thursday report. Instead, Xi reiterated China’s adherence to a foreign policy aimed at pursuing peace and development, it noted. The report also said China’s promise of love for peace is not just an oral commitment, and the troop reduction announced by Xi is an ideal response to those hyping the “China military threat” theory.

The large-scale troop reduction conforms to China’s national and military conditions. The troop cut will reduce the country’s military to a scale that can be more scientifically structured and more easily molded into an effective modern military force with Chinese characteristics. Such a military force will help realize the rejuvenation of the Chinese nation with development at its core. The more than 10 percent personnel reduction in the PLA is also a show of China’s growing confidence in its national defense capability.

But as a developing country facing complicated and diverse security threats, China still needs a military commensurate with its population and economic development. The security and development issues China faces, combined with the looming non-traditional security issues and the arduous task of maintaining national unity, territorial integrity and development interests, also underscore China’s need to maintain a cutting-edge military.

And since Chinese troops are also tasked with disaster relief, international peacekeeping, and rescue and escort missions, they have to be well prepared to deal with the threats posed by terrorism, separatism and extremism. The existence of a military which is proportional in size to the country’s population is not only necessary, but will also help China better fulfill its self-defense responsibilities.

Compared with Japan which has a population of 120 million but 230,000 personnel in its Self-Defense Forces, China’s 2 million troops for a population of more than 1.3 billion should not be a source of concern for anybody.