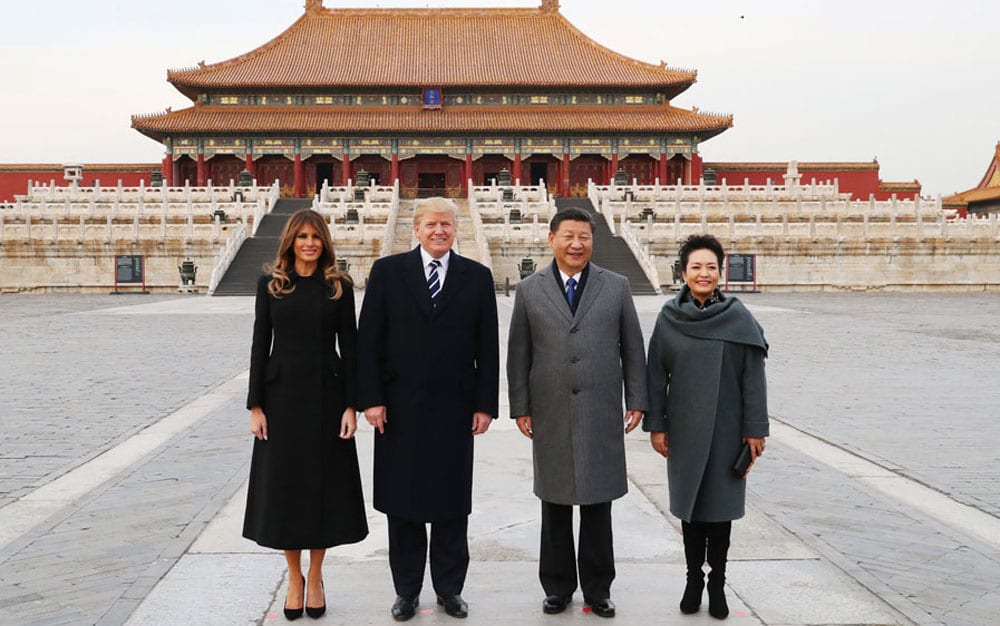 As soon as U.S. President Donald Trump and his wife Melania Trump landed in Beijing on November 8th 2017, Chinese President Xi Jinping and his wife Peng Liyuan accompanied the Trumps for a personal tour of the Forbidden City, widely recognized as the symbol of China’s rich and ancient history. The photo of the Trumps and the Chinese presidential couple standing in front of the Taihedian, the Hall of Supreme harmony, was soon released and went viral on the internet. The activities of the two presidential couples that day were closely followed by journalists from various mainstream media outlets, including domestic news like China Daily and international news like The New York Times. Both the U.S. First Lady Melania Trump and the Chinese First Lady Peng Liyuan appeared to attend every “cultural engagement” and did not shy away from the limelight. On the contrary, the styles and activities of the First Ladies were the subject of lots of news coverage, especially when they visited an elementary school in China on November 9th without the companionship of their president husbands.

Peng Liyuan, a former folk singer with a military background and the wife of the Chinese President Xi Jinping, has been given unprecedented media attention and exposure, especially when compared to the wives of former Chinese leaders.

The term First Lady, according to the definition from the Oxford Dictionaries, is an unofficial title referring to the wife of a non-monarchical head of state or chief executive. It is believed that the term originated in the United States, as its earliest use in print was in reference to Martha Washington, the wife of the first U.S. President George Washington, in the year 1838. Betty Boyd Caroli mentioned in her article First Lady: United States title, which was published in Encyclopædia Britannica, that: “Although the first lady’s role has never been codified or officially defined, she figures prominently in the political and social life of the nation.” With the increased presence of the First Lady in political campaigns and in championship of social causes after the 1790s, it is not surprising that the First Lady naturally became the center of much public attention.

Compared to Western expectations of the First Lady, Chinese leaders were a lot more hesitant to expose their spouses in front of the camera. Zhai Zheng, a lecturer and academic in the School of English and International Studies at Beijing Foreign Studies University, included the following quote from Wang Guangmei, the wife of Liu Shaoqi, President of the People’s Republic of China from 1959 to 1968, in one of his published journals: “An unwritten practice had been followed by the CPC Central Committee since the founding of the People’s Republic of China: wives [of senior government leaders] should not accompany their husbands when they visit Socialist countries...and when visiting non-Socialist countries, [senior leaders] should take their wives along,” Former First Lady Wang explained.

Peng Liyuan has certainly broken the tradition and filled in the gap for the long-time absence of First Lady public appearances and personal images in China.

Born and raised in Shandong Province in 1962, Peng Liyuan joined the People’s Liberation Army and became a civilian member when she was 18 years old. Peng gained popularity from her regular appearances on the annual CCTV New Year’s Gala as a soprano singer. Her works largely focus on Chinese traditional ethnic songs. She married Xi Jinping in 1987, the former deputy mayor of Xiamen and later, the Chinese President.

After Xi became president in 2012, Peng’s role became more complex. Since then, the media has followed her even more closely than before, not only because she is one of the most famous soprano singers in China but also the First Lady of China, who was used to being in the center of the limelight before she became the First Lady, and ironically, before her husband.

As a folk singer and the most exposed First Lady after Mao’s wife Jiang Qing and Madame Chiang Kai Shek (Soong May-ling), Peng is certainly warmly regarded by the Chinese people and has amassed domestic support from the public due to her personal charm. In the South China Morning Post, one article said: “For many Chinese, Peng’s sense of glamour and natural elegance is even more significant in a historical context – as she is the first Communist Party first lady to embrace a polished, modern style that doesn’t look amiss on the international stage.” “Each time Xi’s wife Peng Liyuan makes a public appearance, Chinese netizens take to social media in droves to comment on her appearance – most writing elaborate praise and stating what a relief it is to finally have a globally ‘presentable’ first lady,” the reporter wrote. The Los Angeles Times, in the article For many Chinese, President Xi Jinping may run the country, but his wife’s the real star, mentioned: “When Xi assumed the Communist Party's top post in 2012, analysts expected the same for Peng. So they were surprised when Peng accompanied her husband to Russia in March, 2013, on his first state visit as president, attracting attention for her sophisticated fashion sense. Since then, she has stood by Xi’s side at several major events.”

Peng Liyuan has captured the hearts of the Chinese domestic audience as an artist and as a political figure. She is crucial to strengthening the positive image of the Chinese government and spreading the government’s ideology. In the same article, The Los Angeles Times quoted a Weibo user, who said: “Peng’s love and caring reflect the Chinese government's vision.” In a 2014 profile, China’s People’s Daily claimed that: “Peng has always been among us. Her experience is the best illustration of the China Dream.”

Yang Xiyu, a research fellow at the China Institute of International Studies, spoke of the concept of “First Lady Diplomacy.” The concept may have “originated in the West,” he said, “but China has seen a series of successful diplomatic activities involving its first lady.” Apparently, First Lady Diplomacy is no longer a term that is exclusive to the west: China has finally got Peng and she is very proactive in attending a variety of cultural and social events, ranging from visiting local elementary schools to delivering speeches to raise awareness of HIV/AIDS at the United Nations. “It delivers a more concrete image than what is shown in government reports or declarations,” Yang said.

The Chinese state media intends to use the popularity of Peng as leverage for China’s soft power. As a leading cultural component of Xi’s soft power calculus, she provides a strong and positive contribution to China’s foreign diplomacy. Yet, as a female public and political figure, compared to western First Ladies, Peng promotes China’s political ideologies more than the ideas of female participation in politics, gender politics and feminism. In other words, she may be a fashion icon, an artist, and the “Peng Mama” (Mother Peng, a nickname given by her admirers in China), but she is more of a female mouthpiece for the government than a female politician. Peng could do lots more than she currently does in order to promote female participation in politics and gender equality in China, especially considering the results of the recent 19th National Congress.

Female political participation in China is still significantly lower than male participation. According to the results from the recent 19th National Party Congress, among 204 elected members in the Central Committee, only 11 were women. Among the 25 members of the Politburo, there is only one woman, and there are no women in the seven members of the Politburo Standing Committee. As a female with her own career as a folk singer, instead of writing Women Who Work like Ivanka Trump, or delivering a speech against disrespectful language towards women, like Michelle Obama in New Hampshire, Peng has chosen to decrease her appearance at politically-related events and leave the stage to her husband.

Kerry Brown, the author of CEO, China: The Rise of Xi Jinping said to The Guardian that propaganda chiefs fear that China’s most prominent first lady since the Mao era might eclipse her husband. “She is a very seasoned TV performer and singer and she knows exactly how to play the crowd,” he says. “The last thing the Chinese government and Xi Jinping want is for the front pages to be dominated by her and for his great leadership not to get the coverage they feel it merits.”

Although she hasn’t spoken out a lot to promote women’s political participation, Peng did deliver a speech at UNESCO’s Special Envoy for the Advancement of Girls’ and Women’s Education in 2014, in order to promote female education. According to Shanghai Daily, “Peng is sworn to do everything in her power to help girls and women attain a better education, and thereby help them change their lives. ”

As the research fellow Yang said: “The role of a first lady in diplomacy should be neither ignored nor overstated.” China needs more than just another fashion icon, it needs a female political leader. When conducted by a charismatic figure like Peng Liyuan, promoting female political participation would further elevate China’s soft power.