An earlier version of this article appeared on the Wilson Center’s New Security Beat.

The creation of a water-energy research initiative in the landmark U.S.-China climate agreement last fall could be the beginning of a new and different path for Sino-U.S. collaboration.

Rapidly growing demand for water, energy, and food is creating a massive choke point for China and the world. Energy development requires water. Moving and cleaning water requires energy. Food production at all stages – from irrigation to distribution – requires water and energy. While conversations about China’s environmental challenges are often dominated by coal, the culprit for the endless smoggy days in cities across the country, progress in cleaning the air cannot be achieved without greater attention to resource interdependencies from an integrated water-energy-food lens.

As the world’s manufacturing hub and most populous country, China demands all three resources in ever increasing amounts. Per-capita energy demand in China has risen five percent each year for the last decade. Meat consumption has quadrupled over the last 30 years. In 2030, water demand is expected to exceed supply by 25 percent. In the United States, the shale gas revolution, emergence of biofuels, and droughts in the west and southwest have brought more attention to the water-energy-food nexus. As the world’s top two greenhouse gas emitters, cooperation between the United States and China is a critical avenue for providing leadership on the stewardship of global resources.

Pressure on water is at the heart of resource constraints in China. The country’s power and agricultural sectors are competing for scarce supplies. Water availability per capita is only one-third the global average. As some 350 million more people move into urban areas over the next 15 years, groundwater around urban centers is being pumped faster than it can be naturally recharged and water levels are falling fast. Projected demand in 2030 – 818 billion m3 – is expected to outstrip supply, which currently amounts to 618 billion m3. Significant industrial and domestic wastewater pollution makes the “quality adjusted” supply-demand gap even greater.

Water for Energy, Energy for Water

Coal remains China’s main source of energy. According to the International Energy Agency, about 80 percent of the country’s power in 2013 was generated by coal. Initial research into coal’s “thirst” estimates between 11 and 20 percent of all water used in the country goes to coal mining, processing, coal ash control, and cooling of coal-fired power plants. 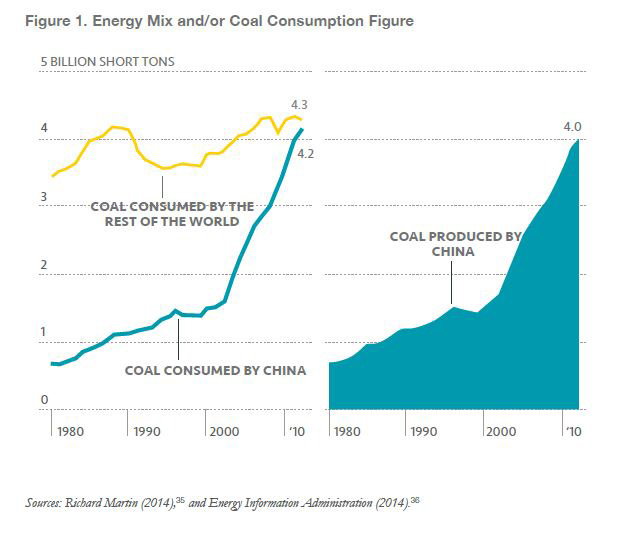 The lifecycle of coal is water intensive around the world, however it presents a particular quandary for a country already facing a water scarcity crisis. Moreover, most water resources in China are in the south while much of the agricultural production and coal reserves are in the north.

Water pollution is in turn placing pressure on China’s energy resources. As the government steps up its efforts to reduce water pollution from municipalities, industries, and agriculture, more wastewater treatment plants are needed, consuming even more energy.

Adding Food to the Mix

China has the challenge of feeding 20 percent of the world’s population with only seven percent of its freshwater resources and less than 10 percent of the arable land. While often overlooked, the role food plays in the water-energy choke point must not be understated. At every step of the process, from irrigation to processing to distribution, food production requires large amounts of water and energy. Droughts, coupled with competition over water with cities and the power sector (especially coal plants), are reducing crop yields.

China is not alone in facing a water-energy-food confrontation. A historic three-year drought in the United States has hammered hydropower production in the west and forced California to rely more on natural gas, wind, and solar power. California’s agriculture has been pummeled; some farmers have been forced to shrink production, switch to less water-intensive crops, or simply stop farming altogether. Over the past decade, U.S. national laboratories, think tanks, universities, and NGOs have been at the forefront of global research on water-energy-food choke points, raising the issue on policy and business agendas. These developments could offer valuable insights on a possible path forward for China, while improving relations between the two powers.

The roadmap identifies three main areas for choke point research and policy development that are particularly promising for Sino-U.S. collaboration, whether via the new climate accord or other means:

While there are no easy solutions to these water-energy-food issues, this roadmap aims to spark discussion and debate, empowering Chinese stakeholders and their partners to explore choke points in their own countries and abroad.