The Certainty of Uncertainty at the 19th Party Congress 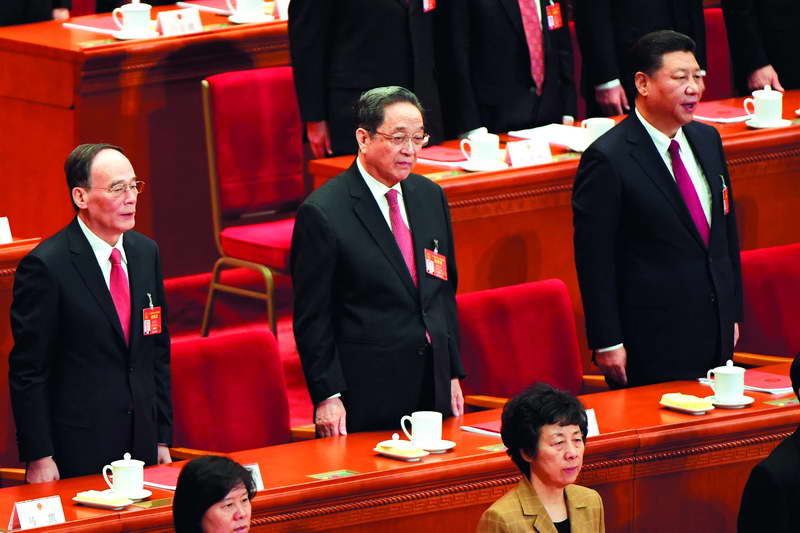 Wang Qishan (L), a member of the Standing Committee of the Political Bureau of the Communist Party of China (CPC) Central Committee and secretary of the CPC Central Commission for Discipline Inspection (CCDI), Yu Zhengsheng (C), chairman of the National Committee of the Chinese People's Political Consultative Conference (CPPCC), and China's President Xi Jinping sing the national anthem during the closing ceremony of the National People's Congress (NPC), China's rubber-stamp legislature, in the Great Hall of the People in Beijing on March 15, 2017. / AFP PHOTO / Greg Baker

In the next few months, the Chinese Communist Party will hold its 19th Party Congress, which is one of the most important political events to watch. Personnel changes and political rumours have already become a hot topic for dinner and party conversations in China. The most frequently discussed one is perhaps who the new members of Politburo Standing Committee will be. To predict members of new leadership is always a challenging task – especially when various rumours are deliberately produced and disseminated to influence overseas public opinion and intra-party negotiation.

Before the 18th Party Congress in 2012, various analyses were put forward by media and blog commentaries. Some analysts, for example, argued that there was some sort of bipartisan politics within the Communist Party, in which two dominant factions, the princeling (taizidang) and the Communist League Faction (tuanpai), reached a level of power balance to both share and check decision-making power with each other. What happened later, however, suggest otherwise. The key leaders of the Communist League Faction identified by those analysts failed to obtain seats at the 18th Politburo Standing Committee. Others, such as Ling Jihua, fell from grace soon after the Congress. During Hu Jintao’s era, due to its fast career promotion path, the Communist League used to be a very popular organization that young officials were motivated to join. This hasn’t been the case during Xi’s era.

Preceding to the 18th Party Congress, some also argued that rules and regulations of China’s leadership transition had made individual leaders no longer important; what mattered was the collective leadership and decision. However, it was proven to be wrong by Xi’s quick grip of power, as he recently won the status of the “core” of the leadership and the party – a title that was never given to Xi’s predecessor Hu Jintao. Moreover, one of the loudest analyses before 18th Party Congress was that Xi would be the weakest leader in the history of the People’s Republic of China. It was argued that Xi would have to face constraints of his two predecessors Hu Jintao and Jiang Zemin, as well as their royal followers. So the argument goes, there was little that Xi could achieve. A few months later, Xi’s ambitious reforms quickly blown away this view and the current popular view is that Xi Jinping may be the strongest leader since Deng Xiaoping—if not Mao Zedong.

So, how much do we really know about Chinese elite politics given that it is so opaque? We perhaps should be a bit more critical of our existing understandings. Is Xi as powerful as he seems to be? Is he capable of getting rid of the collective leadership model? Does Xi manage to centralize the power through his ambitious reforms? The 19th Party Congress will provide answers for those questions.

Needless to say, there are still many uncertainties about 19th Party Congress. It is too early and risky to make any bold prediction (even the date of the Congress is uncertain), let alone highlight any specific changes in the standing committee leadership, which probably will not be decided at the last minute. Thanks to various (in)formal rules of leadership succession, there is at least one certainty: a high turnover rate of Chinese leaders.

This certainty should credit term and age limit rules. The rules specify term limits for the same person to hold the same position. Age limits refers to a specific age that decide eligibilities for promotion or retirement. While this would be considered to be age discrimination in the Western context, it’s a very crucial and effective way to regulate leadership transitions in China. Thanks to those rules, the turnover rate of Chinese leaders at the central committee and the Politburo has reached over 50% since early 1980s. As tradition has shown, we should expect at least 50% leaders in the central committee and the Politburo to be replaced by new blood at the 19th Party Congress.

However, this age-limit rule may be stretched for the Politburo Standing Committee level. The age limit rule “67 stay and 68 retire” means five out of seven Politburo Standing Committee members would retire. Only the President Xi and Premier Li would be eligible to stay. While this is to be expected, many wonder whether Wang Qishan be the exception. Wang, a close ally of Xi Jinping, is currently in charge of party discipline and thus the far-reaching anti-corruption campaign. Previously, Wang was the Deputy-Premier in charge of finance and trade. Many analysts’ did not expect him to take the role of party discipline at the 18th Party Congress. Some even argued that it was a waste of Wang’s talent and expertise given his leadership credentials in the field of finance and economics. By then, no one knew that Wang’s appointment was prepared for launching a political earthquake within the Chinese political system.

Wang’s strong leadership in the anti-corruption campaign has made him one of the most powerful leaders. Some argue that his power is second only to Xi Jinping. Born on 19 July 1948, Wang is currently 69 years old, which falls into the retirement side of the “67 stay and 68 retire” rule. However, various rumours suggest that Xi may need his close ally Wang’s help to finish the job of cleaning the party’s corruption. If this is the case, it will break the informal age limit rule.

It is crucial to briefly revisit the history in order to understand why it is a big deal. During Mao Zedong’s era, the leadership transition system was largely un-institutionalized. Decisions about the promotion and removal of political leaders largely depended on whether you stood on the right political climate or not. Without rules to regulate the succession game, cruel leadership competitions had always led to political instability within the party. At the time, it was a life and death game – as demonstrated by the cases of Mao’s two successors Liu Shaoqi and Lin Biao. The former was arrested and then died in prison, while the latter died due to a plane crash when he fled to the Soviet Union. In order to undermine the negative effects of leadership succession, Deng Xiaoping took efforts in introducing various rules and regulations to ensure smooth leadership successions. Those efforts have provided a foundation for the intra-party stability in the past three decades. To break the age limit rule will certainly undermine the foundation, and thus potentially threaten the political stability within the leadership.

More importantly, this matters not only to Wang’s personal destiny but also Xi’s as well. Various rumours suggest that Xi is interested in continuing to rule after 20th Party Congress in 2022. By 2022, Xi will be 69 years old as well – the same age with Wang now. If Wang can set a new age limit precedent, why can’t Xi? This perhaps will deliver us a political show of China’s Putin seeking for a third term. In this regards, Wang’s personal destiny is linked with Xi’s in 2022.

The uncertainties of Wang Qishan’s case are further complicated by a fugitive Chinese tycoon Guo Wengui. According to Guo, Xi Jinping ordered the security force to investigate Wang Qishan and his family, suggesting that they were not as close as many expect. Guo’s high profile accusations on social media has created a huge public relations problem for the Communist Party. Thanks to powerful internet censorship, this has not become a story that all Chinese know. However, it does dominate everyday discussions for those exposed to foreign media. Guo’s allegations has given more credence to the view that the anti-corruption campaign is more of a power struggle, which has no doubt harmed the political legitimacy of the party, the leadership, and the anti-corruption campaign.

Guo’s accusations are serious and numerous. It is hard to discern their authenticity and to what extent they may affect the power balance within the party. Nonetheless, Guo’s case suggests one thing for sure: Wang’s anti-corruption campaign has harmed the interests of powerful leaders and business forces who wants to see Wang’s retirement after the 19th Party Congress. This is probably why Guo choose such sensitive timing to make the accusations, an event that might conclude Wang’s career.

What kinds of changes may be brought by the above uncertainties and certainties? High turnover rate of leaders will certainly bring a series of changes, but not a fundamentally different Chinese foreign policy. It is impossible to see the similar scenario of, for example, the dramatic withdrawal of the Trans Pacific Parternship (TPP) following the leadership transition in the US. Indeed, a high turnover rate provides an obvious opportunity for Xi Jinping to consolidate his power by promoting his followers into the leading bodies. This might help Xi to further put forward his agenda such as One Belt, One Road. Thus, we will see changes, yet moving towards the same overall policy direction. Even if Xi changes his mind, the shifting Chinese foreign policy will occur in a gradual rather than dramatic process. Domestically, we may see a less intense anti-corruption campaign. The campaign has achieved some of its political goals so far. Official morale undermined by the campaign needs to heal. The party also needs stability and to concentrate on economic difficulties, especially the slowdown and transition of Chinese economy from manufacturing to services. Without a stable economy, Xi’s international agenda can hardly be achieved. Looking ahead to 19th Party Congress, it will be another crucial test for the Chinese Communist Party’s destiny.