Containing Climate Change: The Lessons of Harvey and Hato

On August 23, Typhoon Hato’s eye was directly over Hong Kong. In China, Hato left behind 26 people killed, and damages amounting to $1.9 billion.

Meanwhile, thanks to warm sea surface temperatures and low wind shear, Harvey strengthened into a category 4 hurricane within a single day before hitting the shoreline of Texas on August 26. With landfall, it turned into a massive rain generator unleashing biblical amounts of rain across southeast Texas, particularly in Greater Houston. After floods had inundated hundreds of thousands of homes, displacing more than 30,000 people and causing more than 50 deaths, recovery is likely to take “many years.”

Yet, despite all the headlines and heart-breaking images, Hato and Harvey are just a thin glimpse of what we must face in the future. As extreme weather threats are escalating, efforts to contain global collateral damage are failing.

Greatest climate losses in China and the U.S.

Currently, exposed stock with damage to floods is calculated at $267 billion. Indirect losses and macroeconomic effects are likely to increase these estimates, not to speak of further damage in neighboring Louisiana and inland. A large portion of the losses must be sustained by uninsured homeowners.

Indeed, the disaster in Texas would surpass the Tohoku earthquake in Japan and a similar catastrophe in Sichuan, China. In the U.S. alone, it will prove costlier than Katrina and Sandy combined (see Figure 1).

There is another unsettling aspect to the historical disaster data. The U.S. and China account for seven of the top-10 costliest natural disasters. And the trend is likely to accelerate.

Current efforts to contain the adverse impact of climate change are reflected by the 2015 Paris Agreement, which seeks to reduce the effects of climate change by maintaining global temperatures “well below 2°C over pre-industrial levels.”

While many climate scientists have expressed concerns for increasing destabilization with global temperatures soaring well above 2°C by 2100, still others argue that even 2°C of global warming could prove dangerous and translate to intensified ice melt, sea level rise and superstorms.

From the policy standpoint, efforts to contain global collateral damage should accelerate, when challenges of extreme weather are rapidly escalating. Yet, the realities are the reverse.

U.S. exit from the Paris Accord

On June 1, President Trump announced his long-anticipated decision to withdraw the U.S. from the Paris Climate Agreement.  Based on the UN convention on climate change, the 2015 accord focuses on greenhouse gas emissions mitigation, adaptation and finance. Yet, Trump has called the pact a “bad deal” for the U.S.

The White House began to pave the way to the exit path already in March, when Trump signed an executive order to begin the formal process of repealing President Obama’s unilateral climate agenda, including ending carbon rules for power plants; the key to achieve the Paris goal. Other departments are supporting these efforts, as evidenced by reviews of a coal leasing overhaul, offshore drilling restrictions, emissions standards for cars, methane regulations, and so on.

While a withdrawal reflects the views of Trump’s core constituencies, it has split the nation. In a recent Quinnipiac poll, almost half of Americans were very concerned about climate change and another fourth somewhat concerned.

Legal questions linger as to how the Trump White House can execute the withdrawal and what role the U.S. can play in future international climate meetings.

China's current role in climate change debate is changing as well. In the U.S., China has been seen as the “world’s greatest polluter” since the early 2010s. In aggregate terms, big nations pollute more than small ones. But on per capita basis, the U.S. and major European economies remain the greatest polluters by far.

According to climate research, China contributes barely 10-12 percent of human influence on climate change. That’s lower than might be expected for the world’s largest aggregate emitter. Yet, the effect of greenhouse gas emissions on climate is determined not by current emissions, but by accumulated emissions over the lifetime of greenhouse gases in the atmosphere.

In this view, the U.K. is still the largest single cause of climate change, followed by the U.S. and Germany. These countries have generated huge emissions for almost two centuries.

Since climate change is not just cumulative but accumulative, the bulk of global climate risks can be attributed to today’s relatively prosperous advanced economies which tend to be most resilient against vulnerabilities. However, even this is changing, due to increasing climate consciousness in emerging economies and new environmental complacency in advanced economies.

In the ranking of more than 60 countries, European economies are among the climate leaders, whereas U.S. position has deteriorated significantly. It is barely ahead of China, and Japan is ranked far behind others. In turn, the relatively high position of India is likely to weaken as the country is transitioning into energy-intensive industrialization (see Figure 2). 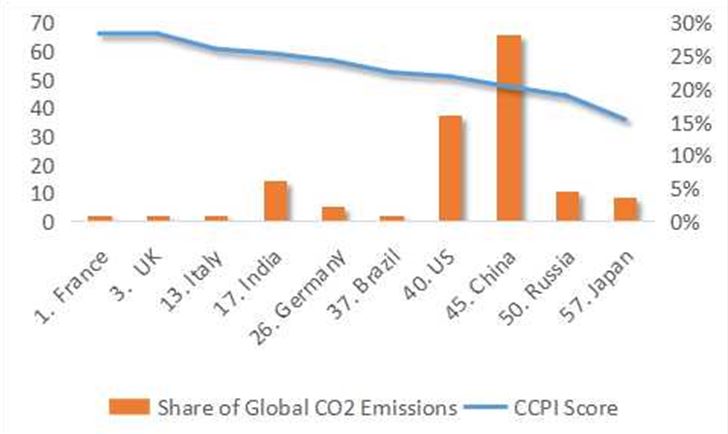 It is the relatively poor emerging and developing economies that are facing the greatest climate threats. More than 1,000 people died in floods across South Asia in the summer, and incessant rain is likely to increase death toll, along with floodwaters. According to the UN, some 41 million people in Bangladesh, India and Nepal have been directly affected by flooding and landslides from the monsoon rains, which usually begin in June and last until September.

According to Global Climate Risk Index, the 10 countries most affected in the past two decades feature emerging economies in Asia (Myanmar, Philippines, Bangladesh, Pakistan, Vietnam and Thailand) and Americas (Honduras, Haiti, Nicaragua and Guatemala) - but no advanced economies (see Figure 3). 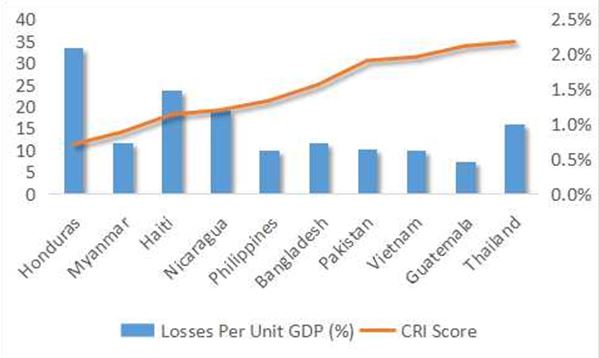 If America opts out from global climate cooperation, that will penalize most those economies where the living standards are the lowest and remain most vulnerable to collateral damage, particularly in emerging Asia.

Take typhoons, for instance. According to climate scientists, since the 1980s, typhoons that strike East and Southeast Asia have intensified by 12–15 percent. Concurrently, the proportion of storms of categories 4 and 5 have doubled, even tripled. Projected ocean surface warming patterns suggest that typhoons striking China, Taiwan, Korea and Japan will intensify further in size and frequency.

Current policy debates on the relevance of climate change in the observed extreme weather phenomena are just a distraction. In June 1988 Dr. James Hansen, the “father of climate change awareness,” testified in Congress that “global warming has reached a level such that we can ascribe with a high degree of confidence a cause and effect relationship between the greenhouse effect and observed warming." Hansen gave his warning 30 years ago.

Only few years remain to reverse the likely path into existential disasters. Under the Paris Accord, the earliest effective date for the U.S. withdrawal is November 2020 -  the last month of the Trump presidency.

Climate ChangeHong Kong
printTweet
You might also like
Back to Top
CHINA US Focus 2022 China-United States Exchange Foundation. All rights reserved.