The following is the transcript of Mr. Jeremie Waterman's speech at the Forum, which has been edited for style and brevity. 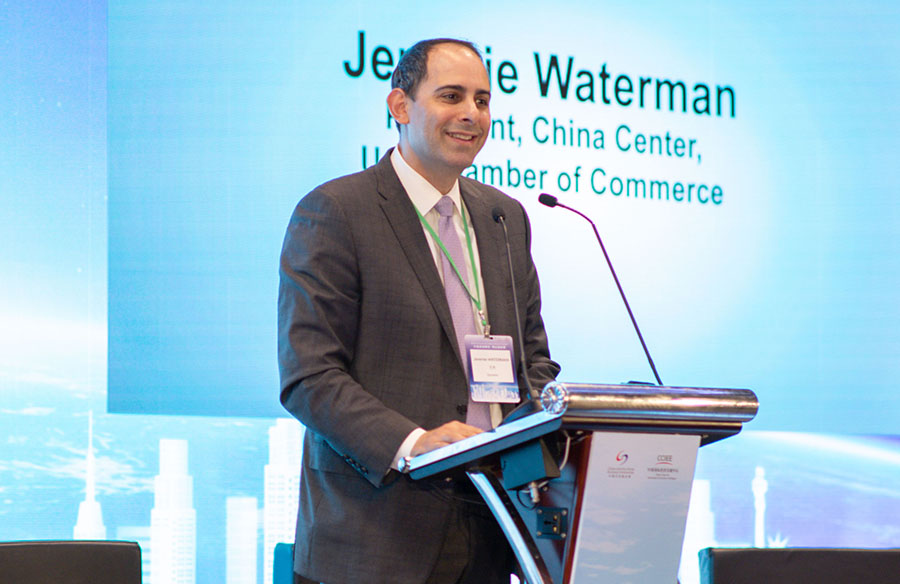 Mr. Jeremie Waterman made the speech at the ‘U.S.-China Trade & Economic Relations: What Now, What Next’ Forum in Hong Kong on July 9, 2019.

As long-standing supporters of close US-China ties and the vast two-way commercial gains and the opportunities to which they give rise, the US Chamber of Commerce and our members are deeply concerned about the current state and arc of the relationship. We fully agree with CCIEE Chairman Zeng Peiyan that the trade deficit is not a core challenge in the US-China relationship. There are significant challenges, however, as highlighted in the Trump administration’s section 301 report. Since 2010, the US Chamber has highlighted in a series of reports the mounting risks to US businesses, workers, and US competitiveness of China's approach to localize industries through subsidies and state intervention, forced technology transfer, misappropriation of intellectual property, and market protectionism.

American business, whether AmCham, the US-China Business Council, or the US Chamber of Commerce, has long warned of a brewing backlash in the United States and other advanced economies against certain unfair trade and regulatory policies and practices across a range of areas. This is not just an American narrative.

To be clear, we in the American business community and at the US Chamber are encouraged by some of the recent actions that have been taken by China, as well as rumored actions that may be taken in the future. Rest assured that American businesses can and will continue to serve as a bridge in this relationship. There remains great optimism about significant commercial opportunities in the China market, notwithstanding our alignment with the majority of the administration's section 301 diagnosis. Neither side can afford two-way tariffs or other actions that are expanding dangerously the scope of this conflict.

The US Chamber and our members are alarmed by and deeply opposed to the escalating tariffs that threaten the benefits of regulatory tax reforms, jeopardize the strength of the US and global economies, and are eviscerating the global trading architecture. And as some of you may be aware, our executive vice president and head of international affairs, Myron Brilliant, speaking on various issues on CNBC a couple weeks ago, provoked the interests of the President. And the President, of course, called in and responded very vehemently, but I only mention that to show how the US Chamber is speaking out vigorously on these issues.

But as we heard from Dr. Edwin Feulner this morning, the commercial relationship, which has long been regarded as the ballast of the broader relationship, has significant and growing cracks. In the current climate, business is quite concerned that there appear to be diminishing circles of overlapping interests between the United States and China. Let me just highlight three points in this regard.

First, there are concerns about the expansion of the China model, which has commoditized certain sectors of the global economy, and which is now migrating into the higher value-added sectors, whether it be under the moniker of Made in China 2025 or efforts to achieve high quality, growth, or digitization. To be clear, for most American companies and workers, the issue is not that they have to compete with China. The issue is what the terms of competition are.

Second, national security concerns regarding the impact of economic policies on national security interests are rapidly accelerating on both sides. Recently, the Trump administration took long considered steps to address the mix of national security and foreign policy concerns posed by the role of Chinese telecom giant Huawei in the US and international networking systems. From the perspective of American business, those actions should be addressed outside of trade talks, unless those talks focus on resolving core concerns on technology transfer, intellectual property protection, and market access outlined in the USTR section 301 report.

Meanwhile, the Chinese government over the same period has moved to deepen its ongoing technology globalization campaign by developing an unreliable list of US firms and individuals, announcing a technology security management system, and proposing potential restrictions on rare Earth exports. It has also released a new barrage of draft cyber inspection measures, technology and procurement standards, data security restrictions, and privacy metrics all with significant trade and investment implications for US companies in its market, regardless of sector. The escalation and broadening of the conflict by both sides is further undermining trust and increasing risk for companies in both countries.

China's recent cyber and data methods in particular are undermining prospects for some of the potential groundbreaking market openings and regulatory improvements, which trade talks could otherwise deliver, including market access for cloud computing, freer data flows, global trade, and cross border services.

Third, populism isn’t going away anywhere. The inability of policymakers to keep up with changes in technology will exacerbate, not moderate, populism, even as technology advancements are widening the gap between the beneficiaries – the United States and China on one hand, and the rest of the international system on the other. For example, Price Waterhouse Coopers estimates that the US and China will enjoy a combined 70% of the global windfall of artificial intelligence. Technology is acting as an accelerant in the US-China conflict. Both sides feel increasingly vulnerable and anxious. Anywhere from 10 to 50% of US jobs could be displaced by automation in the coming years.

To be clear, changes in attitude towards China in the United States began to take hold long before President Trump was elected to office, as Mr. Feulner remarked. And they are almost certain to continue after he leaves. As a reminder, it was the Bush administration that advanced new visa and deemed export control restrictions, specifically focused on China and access to technology at US universities. It was then Bush administration Deputy Secretary of State Bob Zoelick who, responding to growing concerns about Chinese behavior across a variety of areas, delivered his “responsible stakeholder” speech before the National Committee on US-China Relations in 2005. It was Obama administration Defense Secretary Ash Carter who commissioned the DIUx (Defense Innovation Unit Experimental) report on China's investments in the US emerging technologies. It was Obama administration officials who argued, as they were leaving office, that CFIUS export controls require urgent reform. And it was Obama administration USTR Michael Froman who began the process of starving the oxygen from the WTO appellate body over concerns that the appellate body was undermining the organization's ability to deal with critical issues, including state subsidies and public bonds.

So what I would say is history did not begin anew in November 2016 when President Trump was elected, at least in terms of US-China relations. To echo another Dr. Feulner point about changing sentiment in the US Congress, I have not seen the US Congress this energized about China, and I don't mean that in a good way, since prior to China's WTO accession. Bipartisan concern in Congress is being led not by an old guard of anti-trade, anti-China hawks, but by pro-trade, pro-business members of Congress in both houses like John Cornyn, Mark Warner, Dianne Feinstein, Tom Cotton, Marco Rubio, Chris Van Hollen, Devin Nunes, and others.

This is unprecedented over the last 20 years of US-China relations. Solutions and effective management will require strong leadership on both sides.

China’s new foreign investment law provides an opportunity to address concerns, a welcome opportunity to address concerns about forced technology transfer. The value of a new law for US companies will be defined not by outlying practices, but by whether cases such as Micron, Huntsman Chemical, and DuPont, and others like them, can be quickly resolved.

More broadly, the US business community is concerned that excessive government intervention in a market of China's size, with the aim of creating domestic champions in a globalized economy, will continue to fuel the zero-sum, antibody response by US and other policymakers to China’s approach of competing as socialist at home and capitalist abroad. The ensuing uncertainty and instability are bad for business planning, growth in the two economies, and global prospects.

For the US Chamber and American business, giving up and accepting isolationism, or worst yet, pushing for decoupling, is not an option. Confidence building measures in the commercial arena are urgently needed to stave off a catastrophic divorce by our two countries, the fallout of which would be severe, lasting, and leave no country's economy untouched. Further deterioration of relationships is in neither countries interest, as it will erode growth and jobs in both countries and around the world, thereby leaving all with a smaller pie, less security, and less prosperity. The good news is that the two sides have engaged in months of intense negotiations: eleven rounds of talks, no less than eight reciprocal high-level visits in less than two years, and numerous late night and early morning phone calls. Ambassador Lighthizer and Vice Premier Liu He have a keen understanding of the demands of the other. They are not starting from scratch and have well over 100 pages of text from which to work. For business, negotiation provides the best opportunity to address the serious concerns that are continuing to rapidly erode the substrate of US-China relations.

If an agreement could be reached that is comprehensive, high-standard, verifiable, and enforceable, it can provide the basis for rebuilding confidence and trust in certain facets of the economic and commercial relationship. The durability of any outcome will depend in part on the scope and depth of key commitments, but even more so on their verifiability and enforceability. While a positive outcome would surely not address all concerns in the relationship, a strong and enduring agreement has the potential to allow for areas of positive-sum cooperation – and there are many – to return to prominence and hopefully take root to counterbalance the zero-sum aspects of the relationship.

Let me say in closing: it's critical that we do not allow politics on both sides to get in the way of progress made by professional negotiators. And it's equally critical going forward that the two governments find ways to make progress, without either side resorting to large-scale actions, like tariffs, to get the attention of the other that something is wrong in the relationship.

Trade WarChina-U.S. Economic Relations
printTweet
You might also like
Back to Top
CHINA US Focus 2022 China-United States Exchange Foundation. All rights reserved.