All That Is Gold Does Not Glitter 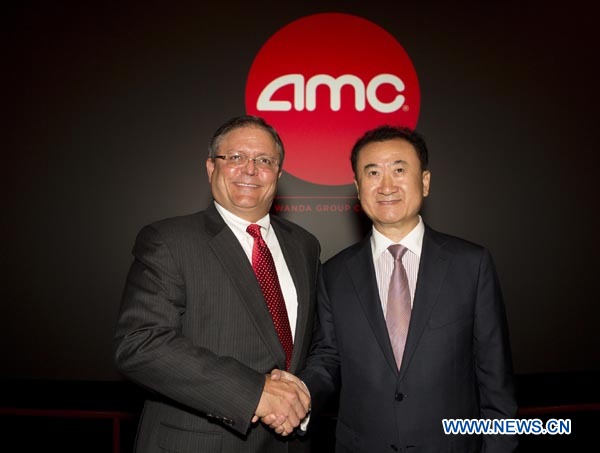 It’s beginning to look like China’s answer to King Midas has lost the golden touch. Wang Jianlin, head of the Dalian Wanda group, and until very recently the richest man in China, has seen stock shares plummet and is selling the crown jewels of his real estate empire to a rival.

Wang had a good run for the money, basking in the glow of compliant media coverage for years in a gilded quest to prove that bigger is better: he poured billions into the world’s biggest theme park, the world’s biggest movie studio, the biggest film distributor and so on. He bought AMC, a movie theatre chain with a dominant share of the U.S. market, and paid 3.5 billion for Legendary Pictures in a pricey attempt to acquire some Hollywood creative mojo. He put another billion in play in a luxury condo project with a prestigious Beverly Hills address, all this in addition to theatres, shopping centers and entertainment venues across the length and breadth of China, including theme parks meant to rival, if not destroy, the market for Disneyworld in Shanghai.

Wang got boastful as he gobbled up brand name companies and prestigious real estate holdings, becoming a victim of hype even as he hyped it.

But his most recent attempt at a big-ticket purchase, Hollywood’s Dick Clark Productions, fell through and he is facing the humiliating prospect of selling a large chunk of his real estate empire to a rival.

The vanity film project meant to flaunt Wang’s media mojo, “The Great Wall,” had marquee talent and impressive special effects but was otherwise a money-losing flop. Fittingly for a man who could do no wrong, it was around the time of the film’s much delayed release to mediocre reviews that Wang Jianlin’s fortunes began to turn.

The Great Wall is an apt metaphor for Chinese history, is littered with the ruins of people doing things in a big way. Although the Great Wall (about which visiting President Nixon remarked, “It really is a great wall”) makes for an excellent tourist venue, it was too big, too costly and too over-reaching to live up to its original pitch. More modern infrastructure works such as the Three Gorges Dam likewise extracted woeful human costs: the submerging of entire cities and the relocation of millions while possibly inducing earthquakes and posing an ongoing threat to the environment.

Even the materially poor era of the Cultural Revolution was an exercise in excess, it’s over-the-top zealotry coming on the heels of the Great Leap Forward, another extreme project. Replacing home kitchens with mess halls and backyard steel furnaces was a grandiose pipedream that plunged China into the most devastating famine of the modern era.

In this relatively sane, relatively stable, relatively affluent contemporary age, the “bigger is better” gene in Chinese political DNA has been muted by an anti-corruption drive, but it still expresses itself in real estate hyperbole and grandiose investment schemes.

China is not alone in this tendency to excess; indeed the current age may one day be regarded with bemusement as that crazy time when greedy developers around the globe hijacked national fortune. (Yes, I’m talking about you, Donald J Trump).

The macro statistics for China’s rise are impressive, but the gains are woefully lopsided. Even with corruption and misallocation of resources, it is an exponentially richer country than it was just a few decades ago, but is it sustainable? China now churns out more billionaires than any place on earth but intense poverty lingers and ordinary hard-working citizens despair of ever getting ahead in a system that feels rigged to favor the politically connected and shameless sycophants.

China’s newly-minted big money men, many of whom combine hard work with pluck and swagger, cunning and con, project larger-than-life personalities. The confidence they exude, the vision they claim as theirs, the magic touch they purport to possess is real until it isn’t. Good fortune can be rescinded at a moment’s notice if they displease the powers that be.

Billionaire wheeler and dealer Guo Wengui flew too close to the sun and got burned in his stratospheric ambition, but managed to flee to the US with a portion of his fortune intact. Others, such as Xiao Jianhua were not so lucky. Xiao, who boasted female bodyguards and camped out in a luxury hotel in Hong Kong, was ensconced in the sort of high life that seemed immune from harm, but he got apprehended and trundled out of the Four Seasons Hotel, abducted back to the mainland by a brazen security team.

Wu Xiaohui, Chairman of Anbang Insurance Group was recently held by police and now Fosun’s Chair Guo Changcheng appears to be in peril as his financial services firm HNA is under fire.

The writing is on the wall. That’s not to say that Wang Jianlin has fallen from good graces, but he’s fallen a notch or two, if only because his relentless pursuit of purchasing ready-made California “soft power” has been superseded by the decidedly unglamorous “One Belt, One Road” scheme as the economic marching order of the day.

Wang Jianlin’s plan to purchase Dick Clark Productions (why does China need to own that?) for one billion dollars was blocked by currency controls. The well-documented difficulty of moving dollars out of China in the past year reflects policy designed to slow the rampant purchase of real estate abroad. It is one thing to stem the trend of affluent individuals gobbling up houses in Vancouver and Los Angeles but quite another to block a company as powerful as Wanda Dalian from moving its cash around, a departure from the practice where rules only apply to “little people.”

There’s nothing “little” about Wang Jianlin, though he may be facing tinier times. The sorry fate of fellow billionaires is not something he can afford not to notice. It may seem grossly unfair that one billionaire should be put in handcuffs while another of comparable greed and moral lassitude should continue to be toasted with a golden chalice, but there’s nothing fair about being a billionaire in the first place. The obscenely rich got to be where they are because society is inherently unfair and they played their political cards right up until the point where they didn’t.

China’s communist party still remains the ultimate arbiter of a billionaire’s fate, but collectively the captains of commerce and investment are too rich to be easily reigned in. Should it come as a surprise that billionaires, no less than dissidents and democratic activists, are being subject to scare tactics to achieve a modicum of state-induced stability?

There’s nothing equitable or fair about “killing the chicken to scare the monkey” but it is a political practice with deep roots in the political culture, as the loquacious fugitive Guo Wengui said in a yacht-based interview in front of the Statue of Liberty in New York harbor.

Property developer Sun Hongbin may enjoy the prestige of an elite education, unlike the street smart Guo, but he shares with the latter the ignominy of having spent time in prison, not an entirely surprising given the rough and tumble nature of climbing to the top.

As head of Sunac, a huge Tianjin-based residential developer he knows something about the “art of the deal.” In July 2017 it was announced he is buying up Wang Jianlin’s malls and theme parks, making him a serious rival to the man with the golden touch.

Even Jack Ma, rare among China’s richest if only because real estate is not the engine of his fortune, shows signs of being nervous. He seems to have traded helming Alibaba to hit the road for never-ending media junkets, including a special edition of “Charlie Rose” and prestige powwows with the global rich. He has doubled down on public relations with his purchase of the South China Morning Post and has fashioned himself as the servant of his customers. But given sudden shifts in the way the wind blows, can any billionaire afford to be anything less than obedient to Beijing’s bidding?

China’s Investments in the AmericasChina-US Economic Relations
printTweet
You might also like
Back to Top
CHINA US Focus 2018 China-United States Exchange Foundation. All rights reserved. Disclaimer