President Xi Jinping first proposed the idea to jointly develop a Silk Road Economic Belt during his visit to Kazakhstan in September 2013, and expressed the hope to gradually expand Eurasian cooperation on that basis. In October that year, Xi visited Indonesia and talked about Southeast Asia as an important hub along the maritime Silk Road since ancient times. According to him, China stood ready to strengthen maritime cooperation with ASEAN countries, make good use of the China-ASEAN Maritime Cooperation Fund set up by China and develop maritime partnerships with a view to building a 21st Century Maritime Silk Road. These were the origins of the Belt and Road Initiative (B&R). 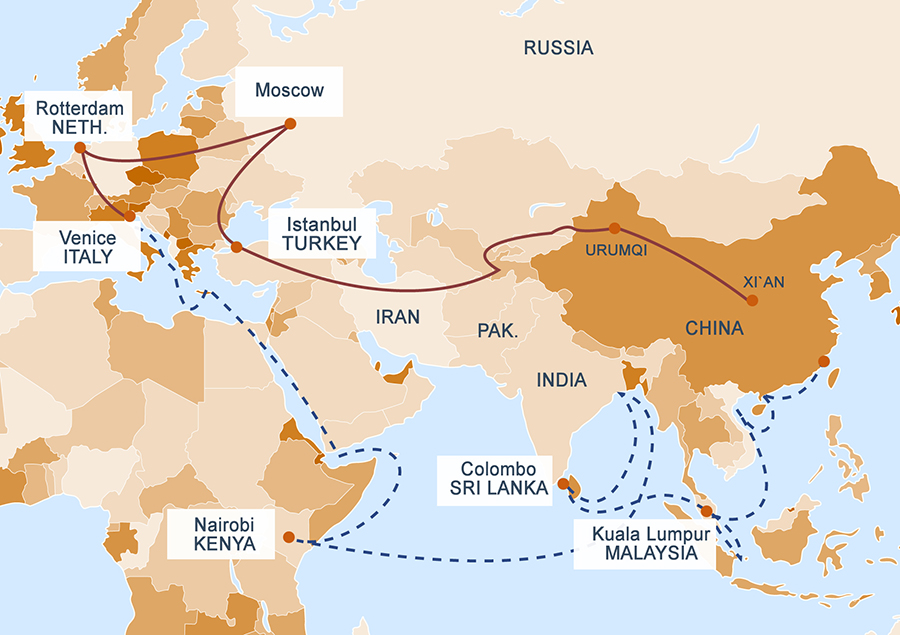 OBOR calls for the creation of an economic land belt that includes countries on the original Silk Road through Central Asia, West Asia, the Middle East and Europe, as well as a maritime route that connects China’s coastal regions to Southeast Asia, Africa and Europe. (China-US Focus graphics)

In March 2015, China published Vision and Actions on Jointly Building Silk Road Economic Belt and 21st-Century Maritime Silk Road, marking the formal introduction of a grand initiative. The Initiative enriched the country’s diplomatic strategy for the surrounding areas and marked the launch by the new Chinese leadership of a vast global geo-economic arrangement, which is led by connectivity, gives priority to the neighourhood and extends to regions further away.

Where does the B&R stand now, over a year since its introduction?

First, the top-down design has been completed, with supportive institutional framework basically in place. The Belt and Road propositions and the Vision and Actions document marked the completion of a top-down design. The Chinese government then followed it up with the formation of the Leading Small Group for Advancing the Belt and Road Initiative and a risk assessment mechanism. In April 2015, the Chinese central bank injected 62 billion dollars to state-owned policy banks for B&R projects. China also created a $40 billion Silk Road Fund. The Asian Infrastructure Investment Bank (AIIB), proposed by China, started operation in early 2016, with 57 founding members and nearly 30 applicants. As a multilateral financial institution, AIIB may provide commercial financing for B&R. The first loan was disbursed in May 2016 for the M4 highway in Pakistan, an important project in the development of China-Pakistan Economic Corridor.

Second, more and more countries and regions now align or agree with the B&R strategy.  China vows that the grand program will be jointly built through consultation to meet the interests of all. As such, strategic alignment with participating countries and regions is essential and effort to achieve such alignment has sped up in the process of advancing the initiative. In Southeast Asia, B&R is considered compatible with construction of the Trans-Asian Railway (TAR) network, on which consensus has existed for many years. Indonesia recently announced a Global Maritime Axis strategy, which overlaps with the 21st Century Maritime Silk Road proposal. The two governments have agreed to align their strategies. China and Vietnam also are now having consultations on cooperation, under B&R and ‘Two Corridors and One Ring’. China and Singapore are exploring how to strengthen construction cooperation in third countries. In South Asia, a joint working group involving Bangladesh, China, India and Myanmar has been launched. India has initiated ‘Cotton Route’, with the prospect of aligning with China’s ‘Silk Road’. Construction of a China-Nepal-India corridor is now on the agenda and efforts to build a China-Pakistan Economic Corridor are advancing fast. China and Russia signed and published a joint declaration ‘on cooperation in coordinating the development of the Eurasian Economic Union (EEU) project and the Silk Road Economic Belt (SREB)’. China, Mongolia and Russia signed an ‘outline on developing a China-Mongolia-Russia economic corridor’, a medium-term roadmap for trilateral cooperation. China and Mongolia agreed to connect the Silk Road with the ‘Grasslands Route’. China and Kazakhstan agreed to link the ‘Silk Road’ to the ‘Bright Path’ new economic plan. China and ROK decided to seize opportunities contained in four pairs of development strategies. In the South Pacific, Australia has high expectations for its plan to develop the country’s northern region to be brought into alignment with B&R. In Europe, China and the EU decided to match B&R with the Juncker Investment Pan, which focuses on infrastructural construction. China and Germany have set up a consultation mechanism to connect ‘Made in China 2025’ with ‘Industry 4.0’. China and the UK are also discussing alignment opportunities, between B&R and North of English Economic Center program. China has signed MOUs with most countries in Central and Eastern Europe.

Third, priority projects are in full swing. B&R covers transport connectivity, capacity cooperation and infrastructural construction, involving an extensive range of projects. Although some projects have had ups and downs due to changing local political situations, financing conditions and debt problems, priority projects have progressed smoothly. Specifically, work on high-speed rail connecting Jakarta and Bandung has started; railways linking China and Laos, China and Thailand, and Hungary and Serbia as well as the Orange Line of Lahore Metro are under construction; port construction at Gwadar, Hambantota, Djibouti and Piraeus is ongoing; and progress is also made in advancing railways linking Malaysia and Singapore, China and Mongolia, and the transcontinental railway in South America.

In February 2016, the Kamchiq Tunnel, the longest railway tunnel in Central Asia (20km) and a critical project along the Angren-Pap railway line in Uzbekistan, was successfully completed ahead of schedule, forcefully advancing connectivity between China and Central Asia. China and Russia will conclude an agreement before end of this year on the construction of a 700km trunk line between Moscow and Kazan. According to statistics, China directly invested nearly $15 billion in the 49 countries along the Belt and Road in 2015, an increase of 18% year on year. In the first five months in 2016, over half (52%) of the total value of China’s overseas construction contracts came from countries along the Silk Road. Over 70 countries and international organizations take an active part in the B&R.

As the international economic environment is rather complicated, B&R will involve enormous investments, long construction cycles and slow payback. There will always been various risks and challenges. It will take concerted efforts of all parties concerned to advance the B&R in an orderly, reliable and sustained manner.

One Belt One Road Silk Road
printTweet
You might also like
Back to Top
CHINA US Focus 2018 China-United States Exchange Foundation. All rights reserved. Disclaimer