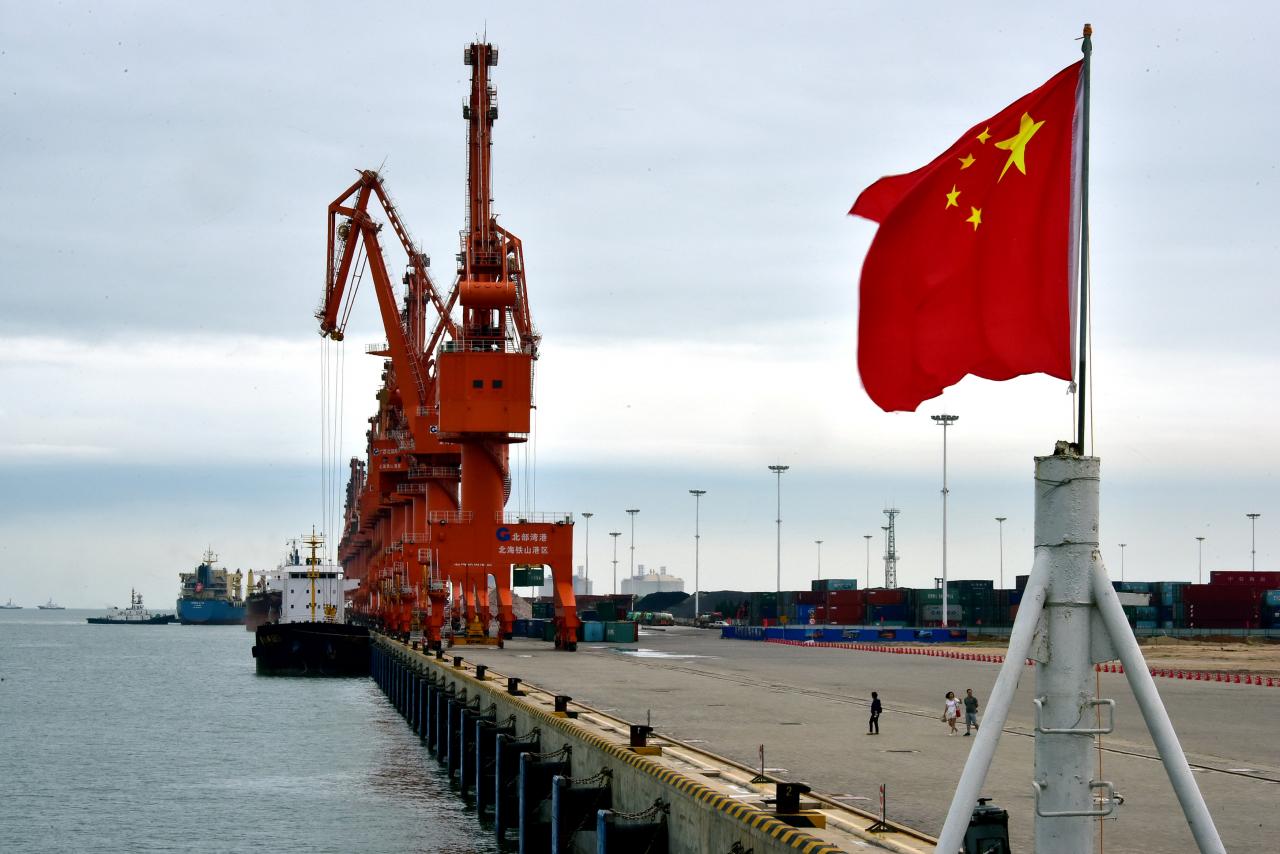 At the beginning of China’s “reform and opening up,” period per-capita GDP in China was less than $300, and capital was in short supply. China made many preferential policies specifically for overseas investment. The first wave of capital inflow was from overseas Chinese, then came investments from the West and beyond. Western investments had not begun to come on a large scale until Deng Xiaoping made his famous speech on a historic inspection trip to southern China in 1992. By the 1990s, the country began to formally join the global system. In order to join the WTO, China needed to change its own systems of laws, policies and regulations and make them consistent with norms of the world economic system.

Since entering the system, China has always stated that by “dovetailing”, the nation intends to join this world system, rather than overthrow it. By the beginning of the 21st century, we began to witness capital oversupply – a very significant, symbolic event. Capital was not the only thing China gained; our production capacity, technology, maturity of infrastructure building capacity are all driving development. China has thus begun to “go out”. Against such a backdrop, major changes have taken place in our interaction with the world economic system. Establishment of the present world system was dominated by Western (especially European and North American) countries, which may not necessarily be fair to China, so reforms have to be made within the system. Therefore, China advocates to reform the UN, World Bank and global peace mechanisms.

Since the 18th CPC National Congress in 2012, China has made it very clear that as its economic strength changes ­– whether with the Belt and Road Initiative or with the Asian Infrastructure Investment Bank – it doesn’t seek to replace the existing world organizational regime, but it has the ability to complement it institutionally via innovation. While making new rules, China not only needs to consider its own interests, but also has to take those of other countries, even the entire world system, into consideration.

As the world gets closer to us, we’re also getting closer to the rest of the world, becoming an important actor on the world economic stage. We are the world’s second largest economy, largest trading nation, and biggest foreign exchange reserves holder. China has joined all the important international organizations as the World Bank and WTO, and warrants an increasing say in international affairs. Major Western nations don’t acknowledge China’s market economy status, because they inevitably evaluate China with their own standards. In fact, no matter how China reforms, it won’t become the kind of market economy we see in the US or Europe.

China has gradually become a gigantic consumer market, but it doesn’t   want to resemble Western markets like-for-like – something that is, at any rate, an impossible feat. Even if China wanted to adopt a Western-style market it would be impossible, since its structures and cultures are so radically different. Yet different market systems don’t necessarily come into conflict, which is a matter of mutual adjustment and adaptation. Of course, there is not a clear-cut, standard definition for market economy in the West. The British and American economies are different from the European ones, just as the economies of Germany and Japan are different. The West’s liberal market economies aren’t the best – just as Karl Marx said, Western market economies can’t escape periodic crises as we saw in the 1930s, or after the 2008 global financial crisis. The state plays a larger role in the Chinese market economy than in Western ones. No major economic crisis has occurred in China throughout its four decades of “reform and opening up,” which is due to the functions of government regulation. Another Chinese contribution to the world is its experiments with different modes of development. China still sees plenty of room for improvement. Globally, the capital-dominated West is in trouble, as are countries with planned economies. Hence, mixed economy will be an irresistible trend.

Relations between China and the US, the world’s two largest economies, aren’t just simple bilateral relations. They are two pillars supporting the entire present-day international system. The sky will collapse when either of them falls. But the two nations differ in some hugely important ways.

First, the US’s mode of development is different from China’s. It’s impossible for China to resort to the past practices of colonialism and imperialism. It can only go its own way now.

Second, the US has played the role of “the world’s policeman,” but China has no intention to do that. How many US troops are stationed overseas? Has China deployed troops overseas, except those for UN peace-keeping missions? There has been lots of hullabaloo about China’s first overseas base in Djibouti, but to me that’s just a simple supply depot. The US once occupied Japan and Germany, but will China? No. Why does China want multilateralism? Because the international community has many other members besides China and the US, and all of them should contribute to the preservation of world order. Which is why China has never accepted the idea of G2. The concept of G2 only indicates both countries are very important: many problems can be solved if the two cooperate, but many problems won’t have a solution if they don’t; even more importantly, many countries will suffer if they confront each other. To a greater extent, G2 means responsibility, not power.

In the future, mutual adjustment and adaptation is necessary, both between China and the US, and between China and the rest of the world. On one hand, other countries need a period of time to adapt to China’s culture, laws and rules. On the other hand, China also needs to adapt to the rules and culture of the global system, just like any people going to the US, Europe or Japan have to adapt to the local laws. This won’t be an easy process. However, only after China and the rest of the world have adapted to each other through proper adjustments will they accomplish real integration.

It is perfectly normal that there has been some friction between China and some other countries. Take the WTO, for instance: China made compromises to join; so did the US in order to let China become a part of the world regime. Today Donald Trump feels the US compromised too much and is dissatisfied with the WTO, but China thinks it has made sufficient compromises and is unwilling to make more. Such opinions are easily understandable, because they are all based on their countries’ respective interests. Some people may feel bullied in the process of adjustment and adaptation. But that’s not true. All compromises are two-way. Others must observe Chinese laws and rules in China. When Chinese companies operate in the US, they need to act in accordance with US laws; the same goes for US firms operating in China. Therefore, we should be rational in evaluating the issues that arise in the process of mutual adjustment and adaptation between China and the rest of the world, and avoid being overly emotional. It is unnecessary to deem the China-US trade spat as something horrible, or see it from nationalist or ideological perspectives. The US needs to adapt to China, and China needs to adjust itself, too.

Judging from the entirety of world history, all progress entails reform and opening up, which means reforming inside, and opening to the outside world. China’s changes in relation with the world system are a part of opening up.

And history shows that China can excel as an open society, like it did in the Tang Dynasty. Back then, many ministerial-level government officials were foreigners. What is now being touted as a 21st Century maritime Silk Road was already in existence in the Tang Dynasty. Some Song Dynasty ships have been excavated in the South China Sea over the past few years, showing international trade had already become very advanced by that time. The country began to isolate itself during the Ming and Qing dynasties. In the 1600s, the Ming court (which had a strong maritime force) adopted a ban on maritime activities, and China thereby lost a precious era. Still, even in that state of self-seclusion, Chinese porcelain was sold to places as far as Europe. At the time, the popularity of Chinese porcelain in Europe was more popular than the iPhone is now. China must learn lessons from those isolated times, and make every effort to avoid falling in the “Ming Dynasty trap”. The country must persistently stick to the path of “reform and opening up,” no matter what difficulties arise on its way ahead. None of the major reform measures the national leadership has come up with lately, be it the Hainan Free Trade Port, Guangdong-Hong Kong-Macao Greater Bay Area, or the Yangtze River Economic Belt, is achievable or sustainable without opening up to the outside world. The US has engaged in trade protectionism and economic nationalism over the past few years. However, from Davos to Bo’ao, China has been reiterating that it will continue opening up, and open wider, even in the face of Western trade protectionism. From a more macro-level perspective, China’s achievements in the past 40 years were based on reform and opening up, and only through continuous reform and opening can it accomplish sustainable development.

China’s EconomyChina’s ReformReform and Opening Up
printTweet
You might also like
Back to Top
CHINA US Focus 2023 China-United States Exchange Foundation. All rights reserved.