Historic Value of the Past 40 Years 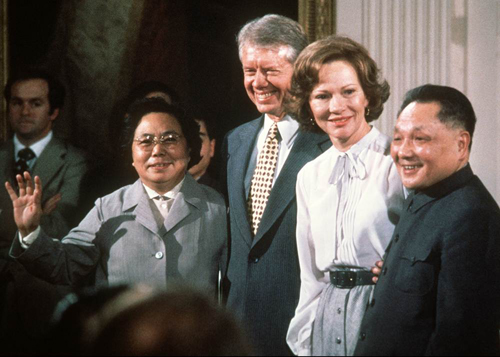 On January 1, 1979, the People's Republic of China and the United States issued a joint statement announcing the establishment of formal diplomatic relations between the two countries. From January 28 to February 5, Vice Premier Deng Xiaoping and his wife Zhuo Lin made an eight-day official visit to United States, at the invitation of U.S. President Jimmy Carter and his wife. (file photo)

December 2018 marks two simultaneous 40 years anniversaries of historic significance: China and the US established diplomatic relations on December 16, 1978, and China launched reform and opening-up on December 18, 1978. This is not a coincidence.

Forty years of normalized relations between China and the US has played a vital role in supporting China’s reform and opening-up. It has not only provided a stable international environment for China, but also resulted in numerous concrete tools securing mutually beneficial cooperation. The two countries have signed hundreds of agreements covering trade, science and technology, education, intellectual property, agriculture, energy, education, tourism, medical service, culture and more. The massive investment of US multinational companies, which boasts over 68,000 US-invested businesses in China today, has brought tremendous new products, new technologies, new visions and market opportunities to China. They also supported 1.74 million jobs directly. Two-way trade increased 233-fold from 1979 to 2017, unprecedented in human history, contributing to economic growth in China. Over the past 40 years of reform and opening-up, over five million Chinese students studied abroad, with over one third of the total studying in the US, acquiring the latest knowledge and expertise in various sectors in the world. China has also benefited from cooperation with the US in the contemporary law making, and in learning and following international trade rules. With hard, protracted talks, China and the US reached the agreement on China’s accession to the WTO on November 15, 1999, which was the key for China’s WTO membership two years later. The latter in turn helped turn China into a leading trading power 15 years later. All the above developments provided a strong push in China’s reform and opening-up and in her integration into the world.

On the other hand, the continuous reform and opening-up in China has also provided vast opportunities for American businesses and the American people. According to a joint study by US-China Business Council (USCBC) and the Oxford Research Institute, two-way trade and investment in 2015 alone contributed 1.2 % to US GDP, and supported 2.6 million jobs. In recent years, Chinese exports to the US lowered the US CPI by 1.5 percentage points and saved roughly $850 per family each year. The US has also benefited tremendously from China’s accession to the WTO. According to USDOC data, from 2002 to 2017, US exports to China increased by 487%, four times as fast as its exports to the rest of the world (including China), which increased by 123.1%. Its imports from China rose by 303.8% during the same period, while its imports from the rest of the world was up only 101.7%.

During the past 40 years of reform and opening-up, China’s average tariff levels were brought down from over 30% to 7.5% by November 2018, and most of the non-tariff barriers have been removed, offering an ever expanding market for US exporters. China now accounts for 57% of US soybean export sales, 25% of Boeing’s global sales, and 20% of US automotive exports. China’s continuous opening-up in market access has provided promising opportunities for US multinational enterprises. According to the latest data by the Bureau of Economic Analysis, by the end of 2016, China accounted for only 1.6% of total US multinational enterprises’ overseas investment assets, but for 6% of total overseas sales, 2.6% of total overseas net revenue, and 5% of total overseas added value. It shows that China is a market with higher than average returns for US multinationals. The AmCham 2018 White Paper also found that close to 60% of its members had put China among the top three of their global investment destinations, and one third of them had planned a 10% or more investment increase in 2018. A recent Rhodium Group report showed that, by the end of 2017, total US investment stock in China reached $200 billion, making a profit of $70 billion out of local sales, which were over $600 billion, larger than Chinese exports to the US, which were at $505.6 billion in 2017, according to USDOC data.

The past 40 years have proved that a sound relationship between China and the US is important to China’s reform and opening-up, and a constantly opening China is also essential for the US.

The current sharp downturn in bilateral relations since President Donald Trump took office, especially the ongoing trade war, is good for no one. A fundamental concern behind the latest Trump Administration’s China policy is the mentality of the “China threat”. They assume that China will threaten the US’ global dominance in both geopolitics and high-tech industries. But the past 40 years of bilateral diplomatic relations and China’s reform and opening-up show that China has no interest in challenging the US in either field.

Although China’s total GDP is already two thirds that of the US, its per capita GDP, estimated at around $9,700 in 2018, is still below the world average of $11,000. The downward pressure in China’s economy justifies upgrading manufacturing to higher end products to keep the economy growing. If China wants to avoid the “middle income trap” and create a high- income society, its per capita GDP will have to reach at least $14,000, or a total GDP of $19.6 trillion, very close to the current size of the US economy. Will that be a threat to the US? Absolutely not. At that level, China’s per capita GDP will be less than a quarter of the current US level ($60,000), or less than half that of the average in OECD countries. China will still have a long way to go to bring happy lives to its people. It will pose no threat to US dominance.

The two 40-years anniversaries are treasured memories for both countries, reminding us what is good for both and what might hurt the interests of each. A stable relationship and prosperous future depend on the strategic vision and practical efforts by governments, businesses, academics, and peoples. Regardless of twists and turns ahead, China-US relations will ultimately return to the track of win-win collaboration.