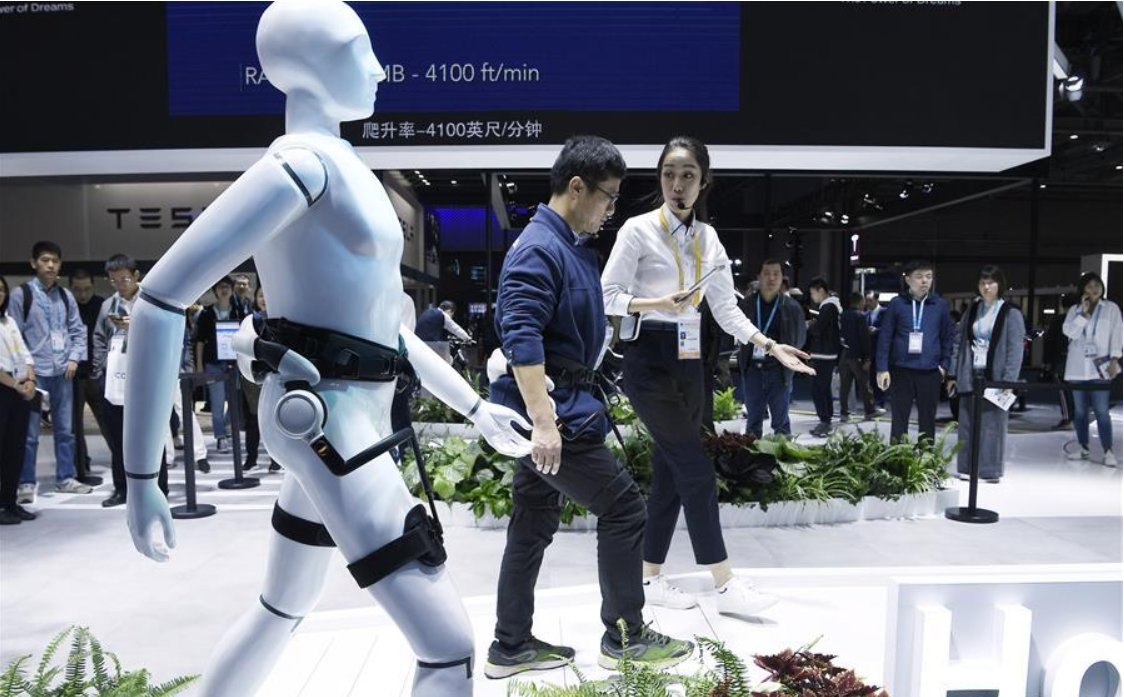 A visitor (C) experiences Honda Walking Assist device at the Automobile exhibition area during the second China International Import Expo (CIIE) in Shanghai, east China, Nov. 10, 2019. The second CIIE was held from Nov. 5 to Nov. 10 at the National Exhibition and Convention Center in Shanghai. (Xinhua/Wang Peng)

As I write, the Second China International Import Expo is in full swing in Shanghai, to great fanfare. President Xi Jinping blessed the gathering by delivering opening remarks. Around 4,000 journalists from China and overseas are covering the event, and some 21,000 business buyers are frantically striking deals. About 30 provincial purchasing delegations have been sent to the exhibition.

In addition, Chinese providers of financial and professional services are on hand to help. The Export-Import Bank of China has set up $42.5 billion in credit lines to aid imports, while China Pacific Insurance is providing coverage for $70 billion in goods and services.

Why does China value CIIE as it does？

Some eight years ago, Martin Wolf of the Financial Times and I discussed over lunch the need for China to rebalance its economy. The country’s trade surplus with the rest of the world was running at around 8 percent of GDP.

Flip to 2019. China’s trade surplus has shrunk to approximately 2 percent of GDP,as the country has become the No. 1 trading partner for around 120 countries. Consumption has turned into the single most-important driver of the country’s economic growth, contributing more than 60 percent of its GDP expansion.

With all these changes, the need for trade rebalancing has all but disappeared.

Designed to boost foreign sales in the Chinese market, the CIIE was launched last year. It made history: No expo of this nature had ever been attempted in the world. The central government invested heavily, and as owner of the expo plays a key role in its activities.

Given the heavy government involvement, there is no lack of speculation about motives — for example, whether the show is intended to temper criticism of China’s trade policy. But if you listen and observe carefully, you cannot escape the single most important fact: China is using the CIIE to share business opportunities with other countries for joint development in a bid to foster a better future for mankind.

In his opening remarks, Xi told the audience — with many attendees from outside China — that “the Chinese market is so big that you all should come to see what it has to offer.”
The invitation delighted the audience, which responded with thunderous applause. Indeed, it may turn out that there was something for anyone who was keen on tapping the market. China has the largest middle class population in the world, and its consumer market is expected to overtake the U.S. as the world’s largest this year. The market for raw materials and capital goods is also expanding.

The CIIE is intended to help revitalize depressed global demand, injecting some much-needed positive energy into a world of increased uncertainty. Chinese leaders vow to make the expo a permanent annual event as a key for opening its market. Just as the Crystal Palace Exhibition in London’s Hyde Park in 1851 ushered in the era of modern world’s fairs, the CIIE will likely be remembered as a pioneer in promoting imports into the host country.

Detractors say that the CIIE is nothing more than a Chinese publicity blitz. But the participants are likely better authorities on that question. This year’s event was attended by a number of foreign leaders, including French President Emmanuel Macron, who has big ideas for his country and the EU. In addition, more than 3,000 overseas companies have paid for booths, travel costs and accommodations. They include representative of more than 190 U.S. companies who voted with their feet and took up space at the expo without a single word of encouragement from their government. Furthermore, numerous would-be overseas exhibitors lamented their failure to secure a booth, despite the fact the exhibition space had been expanded 20 percent to more than 300,000 square meters. It would be hard to imagine that they see the expo as the critics do.

China does not just talk the talk but walks the walk. Among the 98 agreements that China concluded with other participating countries at the first CIIE, 23 have been delivered, and the remainder are either being implemented or closely followed up. Croatian exporters, for example, have benefited greatly from China’s key move to share the dividends of its ever-expanding market, according to the speaker of the country’s parliament. Since they attended the the CIIE last year, Croatian red wine has found its way to China, with dairy products not far behind. For his part, Jake Parker, vice president at the U.S.-China Business Council, commented in an e-mail to CNBC: “We have heard positive feedback from U.S. companies who participated last year.”

For many, the expo has come to symbolize a China that embraces an open world economy and welcomes friends and foes alike to grow and prosper together. But the event is only one part of a much bigger drive by China to contribute to global growth and prosperity.

As a matter of fact, the whole spectrum of opening up the country to the outside world is seen as a way to achieve that goal, which has been energetically bolstered. The law on foreign investment has been revised to address the ongoing concerns of prospectivce foreign investors and is slated to take effect on Jan.1, 2020. Market access will be improved. Restrictions in the manufacturing sector have been lifted, and many that limit the business sectors available to foreign financial institutions are being eliminated. In addition, more free trade zones are under development. Of particular interest is the development of Hainan, an island province with a land mass and a population approximately the size of Switzerland. It is to become a free trade port.

The door of China will open ever wider, as Xi reassured the world at the expo. Chinese leaders are convinced that only when the rest of the world does well will China be able to do well. In an intricately connected and intertwined world, no country can develop alone. China’s future will hinge on what happens beyond its border. For this reason, it is determined to further open up for the benefit of all.

At a reception at No. 10 Downing Street in London six years ago, I heard then-UK Prime Minister David Cameron tell the gathering that China’s huge trade surplus with the UK “makes us richer.” His comment may not be to everyone’s taste, but the message that the CIIE conveys is bound to strike a chord with most of the participants at this year’s expo and beyond.

Let the CIIE’s spirit of sharing and cooperation spread.

Reform and Opening Up
printTweet
You might also like
Back to Top
CHINA US Focus 2021 China-United States Exchange Foundation. All rights reserved.