Many Forks in the Road Ahead 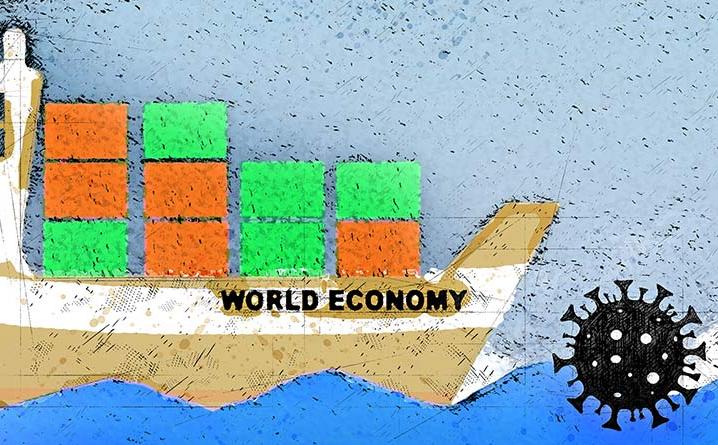 The coronavirus is spreading rapidly and throwing the world into a panic. The nearly uncontrollably complex situation has severely impacted the global economy, society, politics and security.

There is much debate among political scientists and economists. Will the economy head toward recession, depression or crisis? Will the volatility of the financial market lead to another financial meltdown? How will global industrial chains, supply chains and service chains change? How far will the ripple effects of the global economic shock reach?

Although there is much uncertainty about the progression of the epidemic, two time variables — one in which the pandemic is contained within six months, the other within a year — are germane to a preliminary forecast and assessment.

I. An economic downturn is inevitable, with a risk of recession or even depression.

In recent years, the world economy has been characterized by low growth, low inflation, low interest rates, high debt and high risk. The pandemic has made everything even worse. As the coronavirus is likely to stick around for some time, both the international flow of factors and social and economic activities have stagnated or slowed.

International trade and cross-border investment are sliding. Prices of oil and other commodities are fluctuating. As panic and risk aversion rise in the international community, the financial market is experiencing extreme volatility, and the risk of global economic turbulence is soaring.

Countries have braced for the pandemic’s impact and are already feeling the economic downturn. Central banks in the United States, Canada and the United Kingdom have cut interest rates. Euro-area finance ministers have announced that they will mobilize all available policy tools to boost the regional economy. The European Union (EU) is considering an aid package for Italy. The International Monetary Fund and the World Bank have also promised to provide loans or financial assistance in other forms.

However, governments have no magic to mitigate their losses, and their respective efforts remain uncoordinated. This only exacerbates public fear of the pandemic. One international economic organization has lowered its global GDP growth prediction by 0.4 percent to a lowly 1 percent — which is actually a relatively optimistic (if only preliminary) prediction. The S&P credit rating agency estimates that the pandemic could take a $200 billion toll on Asia-Pacific economies.

While an economic downturn seems to be inevitable, whether the epidemic will trigger a global depression is an open question. It’s possible that the coronavirus will be defeated in the near future. Given that the world’s major economies have both the experience and policy tools to deal with this kind of crisis, significant negative growth, large-scale recession or a global economic crisis are unlikely.

The advancement of economic globalization has brought countries into a symbiotic system. The chains of industry, supply, capital and services are closely interlocked and interact with one another. The coronavirus containment measures taken worldwide have limited the pathogen’s impact to a significant degree, even though it has hampered cross-border social and economic activity and dampened the world’s integrated logistics system and channels. As a result, factories worldwide have partially halted or downsized production or even gone into bankruptcy. In this sense, the containment measures have impacted domestic, regional and global chains in three areas: the means of production, the supply of capital and consumer demand.

Major economies such as China, Japan, South Korea, Europe and the United States have enacted some emergency control measures. The upstream supply of raw materials, midstream processing and manufacturing and downstream assembly and sales all demonstrate a decline to varying degrees. In the three production networks — East Asia, Europe and North America —  the cross-border trade in goods, services, e-commerce and digital business have been hindered, endangering the security and stability of global industrial and supply chains.

Optimistically, if the epidemic can be brought under control within a short time (say, the first half of this year), and if the logistics and shipping industry rebounds quickly and if the East Asian production network relying on China’s manufacturing capacity returns to normal, the global chains will survive what might have been a fatal blow. Pessimistically, if the epidemic lasts longer (say seven months to a year), multinational enterprises will seriously consider transferring work to countries with low epidemic risk or those with significant comparative advantages, such as the ASEAN countries. In that case, the supply chains in Europe and North America will be more localized, regionalized and decentralized.

Because European and American businesses had originally intended to increase investment in intermediate goods manufacturing in light of China-U.S. trade frictions, under the aforementioned scenario some of them might actually return to their home countries or regions. Hence, which businesses stand to gain from the restructuring of the global industrial and supply chains will depend a lot on how long the pandemic lasts.

III. As financial markets fluctuate, the risk of a global crisis increases.

In the early stage of the outbreak the international financial market was concerned about the impact. This was reflected in the rise of U.S. Treasury bond yields, the appreciation of the Japanese yen and the drop in the prices of stocks and gold. The U.S. Federal Reserve cut interest rates by 50 basis points on March 3 to cope with the “risks to economic activities” posed by the coronavirus.

Besides market panic and the contagious effect from the stock market, the fall of U.S. stocks also reflects investors’ anxiety about Trump’s pandemic prevention policies. Unlike SARS, the COVID-19 pandemic endangers the security of the real economy and the global industrial chain and thus increases worries. If the pandemic spreads further in the U.S. and the stock market drops by 10 percent for several consecutive weeks, the U.S. Treasury will have to intervene with a bailout.

This will spur another wave of volatility in the U.S. bond market. The quantitative easing policy and risk aversion sentiment have brought Treasury bond yields down sharply and heightened regional risks of default.

Because the stock market tends to be dragged down by the bond market and vice versa, once derivatives meet liquidity problems there will be a marked depreciation of the U.S. dollar and great fluctuations in the currency exchange market.

In addition, the fact that global enterprises are highly vulnerable to cash flow problems could cause marked volatility in international financial markets, which could lead to a vicious cycle. Under extreme circumstances, some countries might even resort to extreme measures, including currency wars, debt freezes or wartime financial regulation.

IV. Ripple effects can reach other areas, dealing a greater blow to the world economy.

In this situation, we need to pay great attention to three risks.

First is the uncertainty of America’s general election in November and the months leading to it. Against the backdrop of the pandemic and the volatility of the global economy, uncertainties in this regard will greatly influence the world’s political and economic landscape.

Second are the geopolitical risks in the Middle East and Iran. The Iran epidemic, internal conflict, American sanctions, regional warfare and an oil price war will make the situation more complicated, posing risks of an energy crisis or a local war.

Third is the risk of economic recession and its political consequences in the EU. European countries are virtually overwhelmed by the pandemic, and the already fragile European economy may experience negative growth. So the impact of the outbreak and economic recession on regional politics and the advancement of European integration should not be underestimated.

The pandemic’s impact on the world economy has a lot to do with its life span, scale and the containment capabilities of individual countries. In terms of containment, China, Japan and South Korea are doing well. Developed European countries are generally faring well, while some developing countries are suffering heavily because of ineffective control measures. The U.S. seems to have remained calm, but the situation is worrisome.

To get a clear understanding of the world’s economic situation, we should focus on three aspects: the time frame and scale of the pandemic; the U.S. economy and financial market; and changes in the global capital chain, industrial chain, supply chain and service chain.

We should be prepared for changes and risks emerging in different periods. In particular, as the pandemic evolves and influences interactions between China and the world, we can identify the prominent characteristics of economic globalization and the important role China plays in the process. We must coordinate domestically and internationally, turn crises into opportunities and seek benefits while avoiding disadvantages with a broader vision and a long-term perspective.

COVID-19Global Economy
printTweet
You might also like
Back to Top
CHINA US Focus 2021 China-United States Exchange Foundation. All rights reserved.