Reconsidering the Belt and Road Initiative 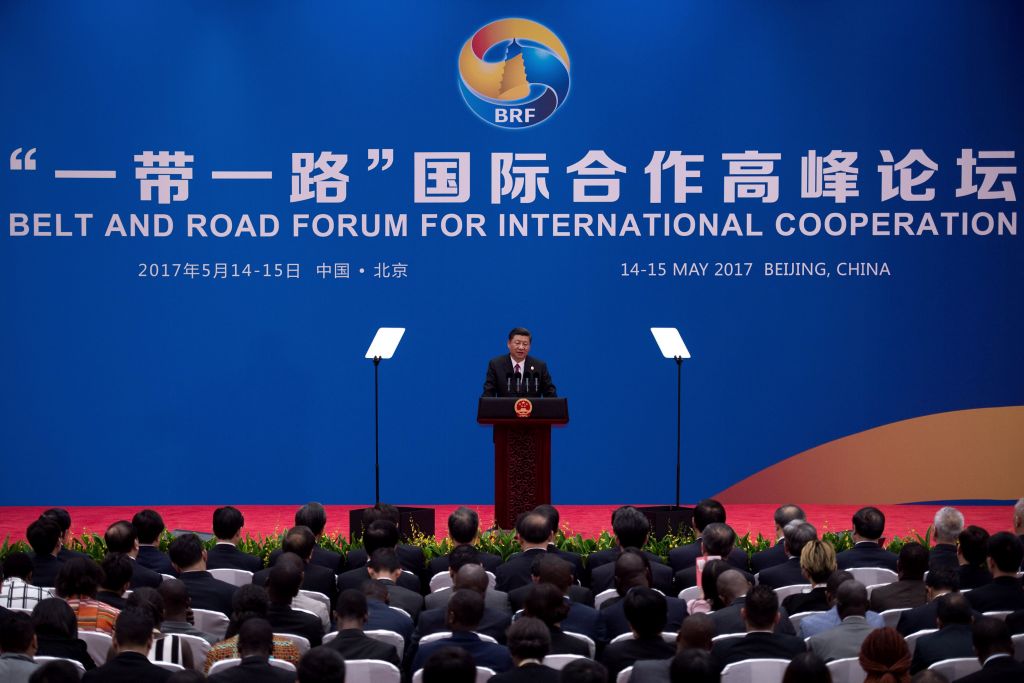 Chinese President Xi Jinping speaks during a briefing on the final day of the Belt and Road Forum, at the Yanqi Lake International Conference Centre, north of Beijing, China May 15, 2017. (REUTERS/Nicolas Asfouri/Pool)

President Xi Jinping’s Thought on Socialism with Chinese Characteristics for a New Era is now firmly enshrined as the North Star for government action. His thought incorporated into the Constitution is the continued development of the Belt and Road Initiative (BRI) as part of the China Dream.

The BRI was first introduced by Xi back in September 2013 during his visit to Kazakhstan. If implemented as planned, it is expected to relieve China of the “Malacca dilemma.” It is a phrase coined in 2003 by then President Hu Jintao on China’s over-reliance on the Malacca Straits between Indonesia and Malaysia.

Touted as the modern-day Silk Road, the network of BRI connectivity would link China with Central Asia, South and Southeast Asia, Africa, and Western Europe through a sprawling web of ports, roads, pipelines, and other infrastructure projects consisting of “65 countries, 29 percent of global GDP, and 60 percent of the world’s population” according to the Paulson Institute. The goal is to promote increased efficiency in resource allocation and “deep integration of markets,” raise the standards of regional cooperation, and “jointly creat[e] an open, inclusive and balanced regional economic cooperation architecture that benefits all.”

The enormity of such an undertaking, of course, raises questions. Indeed, there are many reasons for BRI, and while it is true that many countries along the Belt and Road are in desperate need of large-scale infrastructure investment, it is also true that there are myriad other reasons why China would find these investments worth the attendant risks.

Other Forces at Work

One reason is to diversify and achieve better returns in China’s foreign exchange reserves. Currently, China sits on somewhere around three trillion dollars. When the OBOR was first introduced in 2013, the returns were earning less than one-percent a year. The hope is that the infrastructure investments will generate a higher profit.

Another reason is to provide relief for domestic overcapacity and the myriad zombie State-Owned Enterprises (SOEs), particularly “within the metals and construction and materials sectors.” Beijing has tried to decrease the high levels of inequality between the wealthier coastal cities of the east and the poorer interior western regions through state-directed investments. Not surprisingly, it is in these western regions, such as Gansu, Ningxia, Qinghai, Tibet, and Xinjiang, that there is a high-concentration of SOEs and a low-penetration of private initiatives.

Among many other reasons, it is as much, if not more, a matter of self-interest— part of China’s overall strategy of peripheral diplomacy— as it is about regional stability and development. As such, some are arguing that since these infrastructure projects are motivated more by political factors than real economic rationale, there is significant risk that these projects will fail to deliver the returns expected. These concerns are not without merit.

Too Big to Fail?

The ratings agency Fitch, for one, is skeptical that “China’s banks can identify profitable projects and manage risks better than international commercial banks and multilateral lenders” with decades of experience in financing emerging-market infrastructure. “After all, Chinese banks do not have a track record of allocating resources efficiently at home, especially in relation to infrastructure projects.” As such, they are unlikely to have more success overseas. Meanwhile, local politicians are incentivized by hanging onto the coattails of these white elephant projects, subordinating business logic to political agendas, and increasing the risks of unprofitable projects.

Fitch also estimates that the countries to which approximately $900 billion in credit has been extended all run a high risk of default. It currently rates those countries with identifiable OBOR projects at typically “speculative grade credit ratings, ranging from B to triple B categories.” Peter Cai of the Lowy Institute in Australia suggests that “nearly two-thirds of OBOR countries have a sovereign credit rating below investable grade.”

Adding to the risks in these projects is the issue of soft budget constraints. The “softening” appears “in mixed economies and is conspicuously apparent in socialist systems,” where the state’s treatment of economic organizations and private firms is paternalistic. The China Development Bank and the China Export-Import Bank, for example, lend largely on political considerations and “do not have clear-cut debt sustainability limits.” Xu Chenggang at Cheung Kong Graduate School of Business in Beijing has opined that “Expansion of these soft budget constraints at such an unprecedented rate and in such a large scale is going to generate unprecedented consequences.” Hence, argues Xu: “Instead of solving the overcapacity problems, they are expanding the problem to projects overseas.”

These projects are fraught with financial risks, and Sri Lanka is the prime example. During the nine years of President Mahinda Rajapaksa’s autocratic rule, Sri Lanka began slipping away from traditional funding institutions—such as the Asian Development Bank (ADB), the International Monetary Fund (IMF), and the World Bank—and edging toward China. China invested heavily (and happily) in Sri Lanka and, in fact, became its “leading investor and lender, and its second-largest trading partner.” In the aftermath of the Sri Lanka’s Eelam War that ended in 2009, Western nations began distancing themselves from the Rajapaksa regime over concerns of war crimes and corruption allegations.

When President Maithripala Sirisena unexpectedly defeated Rajapaksa in the 2015 election, he had campaigned on the promise to extricate Sri Lanka from China’s onerous debt terms. But by then, the die had already been cast. Exacerbating the issue was that, having risen to a middle-income country, it no longer qualified for concessionary loans and has had to obtain commercial credit where terms are guided by the markets.

After suspending projects like the Colombo Port City, the Sirisena-Wickremesinghe coalition government tried to renegotiate the terms of servicing its debt, but was told unequivocally that the debt would not be written off. “But if you can’t pay,” the Chinese told Prime Minister Wickremesinghe, “We are ready to swap debt for equity.”

Unable to pay its mounting debts (more than 95 percent of government revenue goes toward servicing debt), and already near default, the Colombo government was forced to do an about-face and enter into a debt-equity swap in which China would pay $1.12 billion for a 99-year lease agreement in which China would have a 70 percent stake in the Hambantota Port and the control of a strategic land parcel in the Colombo Port City.

The far-reaching strategic implications certainly have not been lost on protesters and critics who claim that the island’s sovereignty has essentially been handed over to China as if it were Hong Kong to the British Empire. It’s no surprise that some observers call it “One Road, One Trap” to revive President Xi’s “China Dream” into a Middle Kingdom tributary system in other means.

Invisible Hand by the Visible State

Lest policymakers mistake Sri Lanka for a black swan, they should take note that many countries in the region are somewhere on the slope of this debt trap. The China-Pakistan Economic Corridor (C-PEC), Malaysia’s Forest City, Cambodia’s Sambor Dam and other infrastructure projects, as well as Bangladesh, Nepal, Indonesia, Maldives and countries such as Ethiopia, Kenya, and Venezuela, are all vulnerable to significant economic, political, and environmental risks when they too readily accept Chinese money tossed in their direction.

Recently, Pakistan pulled the plug on the Diamer-Bhasha dam, a major CPEC project that was a part of OBOR. The Chairman of the Pakistani Water and Power Development Authority (WAPDA) was quoted as saying that “Chinese conditions for financing the Diamer-Bhasha Dam were not doable and against our interests.”

In a similar blow to OBOR, Nepal recently “scrapped” its $2.5 billion, 1200 MW Budhi Gandaki hydropower plant with the China Gezhouba Group Corps (CGGC), citing “irregularities” because CGGC had been “selected without initiating a competitive bidding process.”; a breach of Nepal’s Public Procurement Act. Budhi Gandaki had also been identified by China as a component of OBOR.

These moves suggest that some of these countries are waking up to the fact that what appears to be Chinese largesse must be subjected to much greater scrutiny, lest they commit themselves to a Faustian deal.

On its face, China does appear to be the loaner of choice over multilateral institutions such as the IMF, the World Bank, or the ADB for not interfering in the domestic affairs of recipient countries, and its no-strings attached approach. However, there are, in fact, many unwritten but implied strings attached and, as Sri Lanka has learned, the consequences are costly for their sovereignty and self-governance.

But China views the situation differently. Liu Xiaoxu of the China Academy of Social Sciences writes, “China has no strategic illusion about Sri Lanka, which is too close to India geographically to resist any influence from its powerful northern neighbor, neither is there any deliberate or insidious plan to trick Sri Lanka into a debt trap. Nor is it economically naïve to squander money building the largest swimming pool in a tiny island which is thousands of miles away from it.” This clearly reveals the working of invisible hands by a very visible statecraft with a mission to create a “pacific” New World Order mirroring the old tributary system.

Belt and RoadGDP
printTweet
You might also like
Back to Top
CHINA US Focus 2018 China-United States Exchange Foundation. All rights reserved. Disclaimer