The Petroyuan Shift: Eclipse of the Petrodollar Monopoly 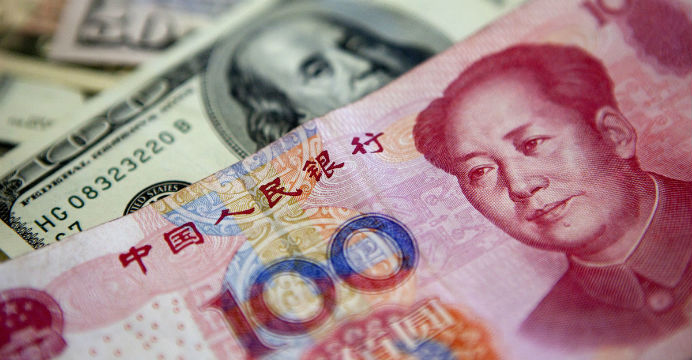 In late March, as international media focused on Trump’s tariffs and the prospects of a trade war, renminbi-denominated oil contracts began trading in the Shanghai International Energy Exchange (INE) for the first time. This will foster the rise of the petroyuan, which may cause a dramatic shift in global asset allocations as institutional investors begin to diversify into China’s onshore bond markets. 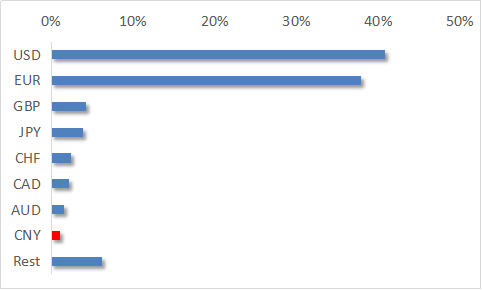 Following its integration into the global economic and trading environment, China is now integrating into the global financial system. It is already the world's biggest trading country, has the largest foreign-exchange reserves, and the world's biggest consumer market. As China now also absorbs most of the world’s commodities, dollar-denominated intermediaries are not warranted - if they ever were.

Rise and eclipse of petrodollar

After World War II, the U.S. dollar was the predominant world currency and America fueled almost half of the world economy. Today, the U.S. dollar accounts for barely 40% of international payments, while the share of the U.S. in the world economy is less than half of what it was in 1945. So why does the U.S. still benefit from this “exorbitant privilege”? That has more to do with the petrodollar.

After the 1945 Yalta Conference which effectively divided Europe, the ailing President Franklin D. Roosevelt met Saudi Arabia’s King Ibn Saud. Bypassing the Brits, the former “masters of the universe,” FDR and Saud agreed to a secret deal which required Washington to provide Saudi Arabia military security in exchange for secure access to supplies of oil.

Despite periodic pressures, the pact survived until the 1971 “Nixon Shock.” As dire U.S.  economic prospects led President Nixon to the unilateral cancellation of the direct international convertibility of the U.S. dollar to gold, the postwar Bretton Woods system of international financial exchange was replaced by a regime based on freely floating flat currencies. The U.S. dollar was decoupled from gold. To deter the marginalization of the U.S. dollar, Nixon negotiated another deal which ensured that Saudi Arabia would denominate all future oil sales in dollars, in exchange for U.S. arms and protection. Led by Saud, other OPEC countries agreed to similar deals and global demand for U.S. petrodollars soared.

The U.S.-Saudi strategic partnership weathered another four decades of multiple regional wars. When the Fed began to pave the way for rate hikes in 2014, the value of the dollar started to climb, though slower than expected, and oil prices plunged since oil markets are dollar-denominated. To seal the old alliance, President Trump signed a historical $110 billion arms deal with King Salman.

Yet, the U.S. dollar's coverage is slipping because structural conditions that supported its dominance have been softening since 1971.

How OBOR drives the rise of petroyuan

The internationalization of the Chinese renminbi accelerated significantly in 2016 when the RMB joined the IMF international reserve currency basket. Last October, China established a payment-versus-payment system for transactions involving Chinese yuan and the Russian ruble. The China Foreign Exchange Trade System (CFETS) hopes to launch similar systems with other currencies based on China’s huge multi-decade, multi-trillion One Belt One Road (OBOR) initiative.

As the OBOR expands links between major economies in Asia, Africa, Europe, and Latin America, member countries are candidates for RMB-denominated payments. Last December, Iran, which has not deployed the U.S. dollar in foreign-trade transactions since the early 2010s, announced it would join the Russia-led Eurasian Economic Union (EEU), which will also have a central role in the OBOR, and thus in RMB-denominated payment systems. U.S. geopolitics is escalating these trends. When the White House suspended U.S. aid to Pakistan, Islamabad announced that the Chinese yuan could be used for bilateral trade and investment activities, which will support the China-Pakistan $57 billion economic corridor.

Recently, China has become the largest global oil consumer (Figure 2). With major oil exporters like Russia, Venezuela, Iraq, Iran, and Saudi Arabia, China's market means leverage, and many of these suppliers have either already agreed to price their sales to China in RMB, or are actively considering it (Figure 3). In turn, major commodity exporters, such as Indonesia, have joined in non-dollar trades. 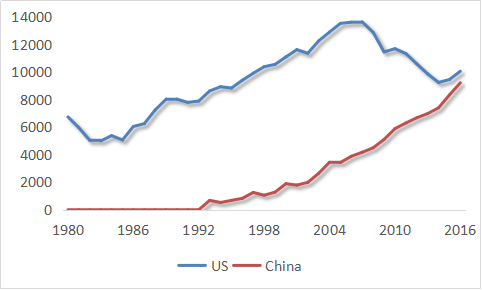 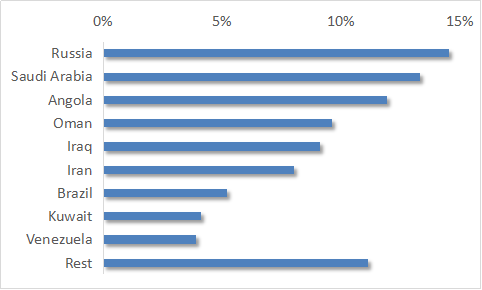 The future is on China’s side. By 2040, Chinese annual demand is expected to grow more than 30%, whereas the U.S. is likely to reduce its reliance on oil imports as it hopes to develop domestic shale oil capacity. U.S. economic interests in Saudi Arabia may erode, even if military interests prevail. If Saudi Arabia decides to adopt the yuan for some of its oil exports, that could unleash a broader shift.

As an increasing share of China’s oil imports will be priced in RMB, that will result in large RMB reserves in oil exporting countries, which will be spent on Chinese exports, or recycled into China's financial markets. As demand for RMB assets will increase, the role of the USD for trading purposes will lessen.

In the short-term, the Chinese system is unlikely to change the way oil is traded globally. Even with exchange convertibility, international investors and resource traders must have confidence in Shanghai INE as a trading hub.

In secular terms, the petroyuan will mean a paradigm shift in global asset allocations to China’s financial markets, as long as China will continue to remove or significantly reduce capital controls for RMB-priced oil trading. Between 2014 and 2017, global institutional investors already tripled their China holdings of onshore bonds. In a year or two, when China's onshore bond markets are likely to be included in global bond benchmark indices, a major reallocation of capital will flow into China's onshore bond markets.

An important caveat: the progressive shift to petroyuan will speed up disruptively if investors one day lose faith in the U.S. dollar, due to a U.S. debt crisis, or a huge Trump policy blunder. The shift away from the U.S. dollar could accelerate dramatically.

China’s economic rise is already a reality. The coming shift in global asset allocations is its rightful reflection in world finance.

China TradeGlobal Trade
printTweet
You might also like
Back to Top
CHINA US Focus 2018 China-United States Exchange Foundation. All rights reserved. Disclaimer