Will China’s GDP Growth Slip Below 6%?

China’s economic slowdown is far milder than the current synchronized sharp slowdowns in 90 percent of the world’s economies, which were caused to a large extent by trade tensions, as pointed out by the International Monetary Fund. The October version of the IMF World Economic Outlook estimates global GDP growth at 3.0 percent for 2019, the lowest since the global financial crisis of 2009 and 0.4 percentage points down from its April estimate.

The global slowdowns cover all the developed economies, including the United States and, especially, the Eurozone. U.S. GDP growth has been estimated at 2.4 percent for 2019, compared with 2.9 percent last year. The Eurozone is expected to have only 1.2 percent growth, with Germany, the largest economy, at a meager 0.5 percent, barely escaping recession. Emerging and developing economies as a whole will see GDP growth below 4 percent this year for the first time in more than a decade.

In the context of a major global retreat, the Chinese economy, which is larger than the whole Eurozone and which is growing at around 6 percent, can well be regarded as a bright, steady and fast-growing leading economy.

During the first three quarters of this year, 6.2 percent GDP growth was supported predominantly by the tertiary sector, which grew by 7.0 percent. The primary and secondary sectors grew by only 2.9 and 5.6 percent, respectively. Contributions by the secondary sector weakened because of an industrial slowdown, though it grew by 5.6 percent — 0.5 points lower than in 2018.

Automotive manufacturing dragged down industrial growth overall. Auto output from January to September was 18.15 million units, 11.4 percent off a year ago, while auto sales were off 10.3 percent, at 18.37 million units. As the auto industry accounts for 6.5 percent of the total industrial output value, its sharp decline has dragged down the whole industrial sector with it. Faltering auto sales also dragged down retail sales. Total retail sales from January to September grew by only 8.2 percent year-on-year, well below the 9.0 percent growth recorded in 2018. However, non-auto retail sales growth was slightly higher at 9.1 percent.

The articulation of the three major driving “horses” of the economy — consumption, capital formation and net exports — provides a clear picture of the GDP slowdown. 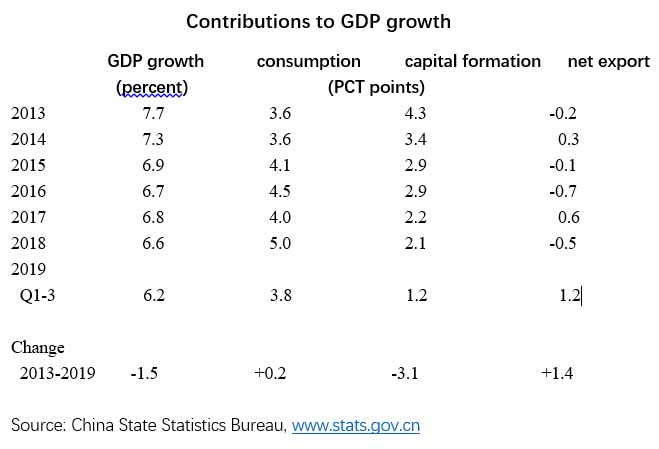 The table shows that, compared with 2013, or six years ago, the GDP growth rate from January to September was 1.5 percentage points lower. The contribution by consumption remained stable. The contribution by capital formation has been declining steadily from 4.3 points to 1.2 points — off more than 3 points and mitigated only partially by net exports.
During the first three quarters of this year, total fixed investment grew by 5.4 percent, lower than the 5.9 percent in 2018, which was already a low rate. Investment in the secondary sector remained at ebb, at only 2.0 percent growth, while that in the tertiary sector grew much faster at 7.0 percent. Education, healthcare, computer and information technology and special equipment saw the fastest growth. Fixed investment in China is undergoing a profound restructuring before finally bouncing up. As a result, low growth in investment will continue in the short term.

Contrary to the formula analysis that ascribes the economic slowdown to China-U.S. trade tensions, January to September economic data from China shows just the opposite. As a result of the unprecedented trade war, China-U.S. trade fell by 10.3 percent in the first three quarters. However, Chinese imports from the U.S. fell much faster (off 22.5 percent) than its exports (off 6.0 percent). As the fast growth in exports to the European Union, ASEAN and participants in the Belt and Road Initiative more than offset the decline in trade with the U.S., total exports still managed growth of 5.2 percent. The sharp fall in China’s imports from the U.S., however, was not fully covered by increases from other sources, resulting in a slight decline (off 0.1 percent) in China’s global imports.

The export increase and import decrease combined has led to a net positive contribution to GDP growth. The contribution was 1.2 percentage points in the first three quarters this year, the highest since the so-called new normal began in 2013. Without that contribution, the GDP growth rate would have been only 5.0 percent.

Nonetheless, September saw a steep fall in China’s exports to the U.S., as 10 percent additional tariffs on the first group of $300 billion took effect on Sept.1. With the global economic and trade downturns further developing, Chinese exports will face mounting difficulties during Q4 and beyond.

There are signs of a moderate rebound in the economy since September. After a sharp slowdown to 4.8 percent growth in July (6.0 percent in H1) and a further slowdown to 4.4 percent in August, the above-scale added value in industrial growth rebounded to 5.8 percent in September. Manufacturing PMI also returned to 49.8 in the month, very close to expansion.
Auto production, the key factor dragging down the economic growth so far, rose slightly, by 0.5 percent, in September.

With all those factors, Q4 will see a higher contribution by capital formation, a slightly lower contribution by net exports and a stable contribution by consumption. On balance, the growth seems steady. The GDP growth rate for Q4 appears most likely to remain at around 6.0 percent, with more chances of slightly higher than slightly lower. As a result, the growth rate for the whole year of 2019 will be between 6.1 and 6.2 percent. For 2020, there will be a limited rebound in the Chinese economy if the world trade tensions ease and growth picks up. If the world economy continues on the downside, China will step up efforts to secure a growth rate no lower than 6.0 percent. In any event, China will continue to serve as the largest contributor to world GDP growth and support the global economy through difficult times.

GDPChina’s EconomyReform and Opening Up
printTweet
You might also like
Back to Top
CHINA US Focus 2022 China-United States Exchange Foundation. All rights reserved.