Will the ‘BRICS-Plus’ Keep Growing?

President Xi Jinping of China hosted the virtual BRICS Summit in summer 2022 as the war in Ukraine raged on. It is now fall 2022, and the war continues as more countries continue to engage with the BRICS and expand their economic and political ties with the group.

The central topic of the summit was Russia's economic ties with non-western nations and how to circumvent U.S.-led and EU-supported sanctions on Russian exports through cooperation with Brazil, India, China, and South Africa, as well as other non-aligned nations. In terms of energy, food, and other goods, Russia has succeeded in expanding its trade volumes with many countries in Asia and Africa.

The summit in June somewhat foreshadowed what was to come as the theme, "Foster High-quality BRICS Partnership, Usher in a New Era for Global Development," brought in a new era with efforts to work on a global system that will prioritize unique national interests by focusing on pragmatism and the Fair World Order. Such a pragmatic approach is central to Beijing's foreign and investment policy, as well as Russia’s foreign policy. At the same time, the U.S. has often used diplomacy and ideologically rooted arguments in its aggressive expansion of liberal democracy throughout much of the world since the end of World War II. These ideological arguments are now completely dismantling Washington’s relationship with both China and Russia.

The Summit also addressed ways to strengthen economic ties between BRICS member countries. Many member states have abstained from the United States during votes condemning Russia for their war in Ukraine. However, President Jair Bolsonaro has pledged neutrality, while Brazil's U.N. ambassador voted in favor of condemning the nation. President Vladimir Putin has attempted to strengthen ties with countries like India and China to soften the blow of Western-imposed sanctions. Russia hopes for the potential to shift away from the SWIFT system since sanctions froze half of Russia's gold and foreign exchange reserves, which stood at around US$600 billion since the war in Ukraine began. Russia’s mission has been consistent since the beginning of the war.

Yang Jiechi, director of the Office of the Foreign Affairs Commission of the Communist Party of China Central Committee, made remarks when chairing the 12th Meeting of BRICS National Security Advisers and High Representatives on National Security via video link in Beijing. He argued that the BRICS nations should practice multilateralism, tackle traditional threats, and work together to balance security and development.

According to Russian Ambassador to China, Andrey Ivanovich Denisov, security cooperation will be high on the agenda of this year's BRICS summit. Denisov also expects the BRICS to play a more significant global role by reducing their dependence on U.S.-dominated international payments systems.

The Russian ambassador argued that "the role and the force of U.S. dollar as international currency is going down now and we need to replace, to substitute something which can work, not just absence, because it is very far to seek to go to the absence of U.S. dollar, but if it goes weaker, then we need to substitute in order to prevent economic loss, that's just pragmatic, non-political and timely demand for all the countries, for economies engaged in global, regional economic cooperation." 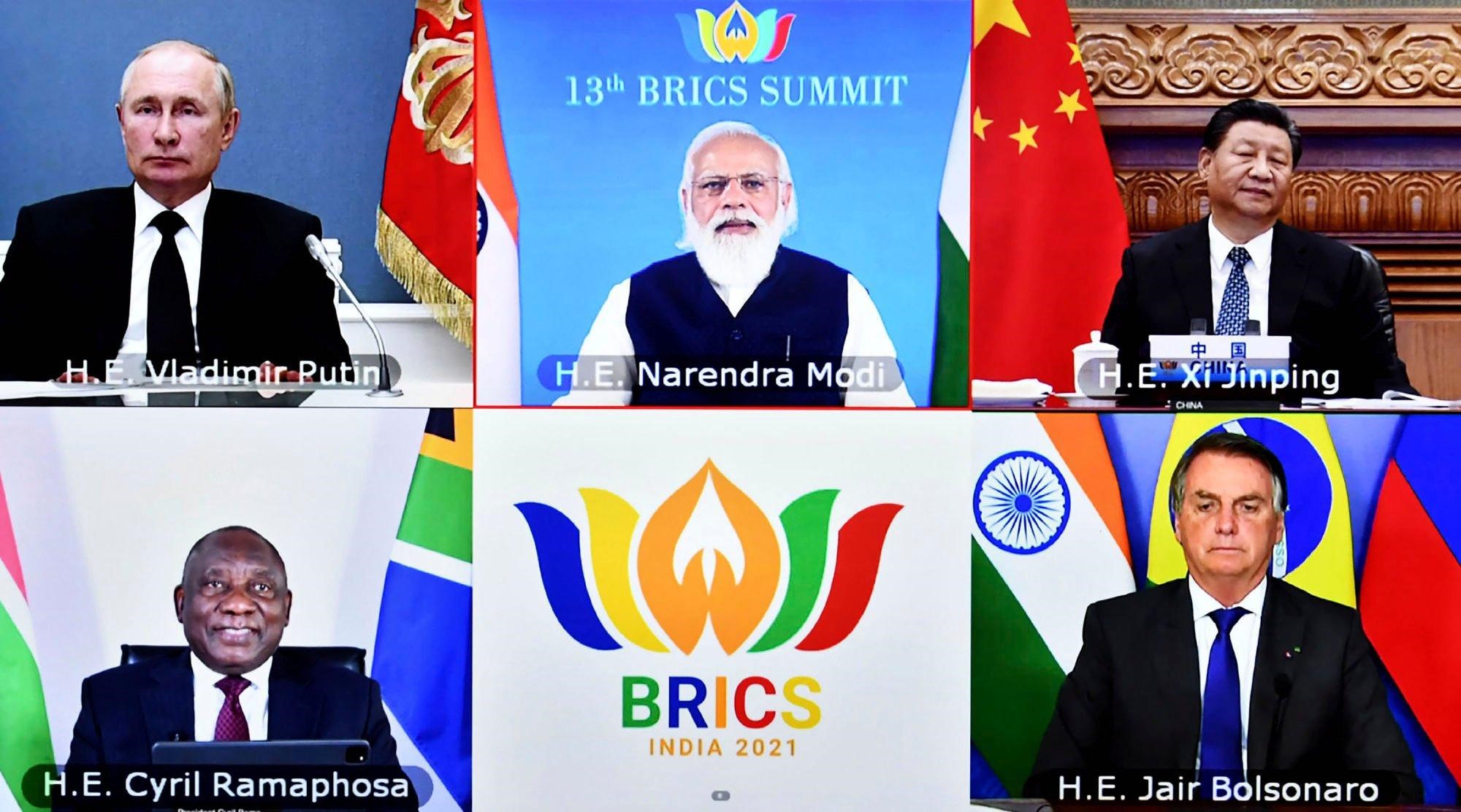 Denisov also confirmed the recent statements by Chinese President Xi on how the BRICS nations need to engage in dialogue and exchanges with other emerging markets, suggesting ambitions to expand the group.

The BRICS group contains Brazil, Russia, India, China, and South Africa and accounts for nearly 42 percent of the world population, 27 percent of the land surface, and 32 percent of global GDP. The notion of 'BRICS Plus’ suggests that the group could expand to confirm President Xi's words as a promotion of the true spirit of multilateralism and multiculturalism to preserve emerging markets and developing countries.

Chinese State Councilor and Foreign Minister Wang Yi announced the idea of ‘BRICS Plus’ to expand the group and promote peace, development, equity, justice, democracy, and freedom among other developing countries during the current period of geopolitical uncertainty. Some nations China has supported joining include Argentina, Egypt, Indonesia, Kazakhstan, Saudi Arabia, UAE, Nigeria, Senegal, and Thailand. The greatest challenge for the BRICS will be resolving some disagreements between China and India and accepting new members who may have contradictory worldviews. The BRICS have also encountered various ideas about future commodity-based trade currencies as the dollar becomes more weaponized through sanctions against Russia. The expansion of the BRICS seems to slowly but surely grow closer into a reality.

The U.S. sanctions against Russia have led some countries to rely more on their national currencies in foreign trade. There is also increased talk of efforts to integrate payment systems and create an alternative to the SWIFT payment messaging platform. Central banks of the BRICS countries agreed to conduct the fifth test of a banking mechanism that could allow for jointly pooled "alternative currency" reserves to shield their economies from external shocks.

Russia and China, for example, have been developing bilateral trade meant to cut out the U.S. dollar for many years. Russia is resource-rich, and China has the world's most extensive manufacturing and export base. Only weeks before the invasion of Ukraine, Russia signed a 30-year oil and gas contract with China worth hundreds of billions of dollars. This deal coincides with the construction of a significant pipeline from Russia to China which will be completed by 2025.

India also planned increased oil shipments from Russia and will pay without the dollar (formerly the world's sole petrol currency). Furthermore, the promise of lower prices while the rest of the oil world is experiencing rapid inflation in energy prices is highly tempting for those purchasing oil, natural gas, or coal from Russia. The other nations of the BRICS bloc have all been highly active in trade with Russia despite western sanctions and the removal of Russian banks from the SWIFT international payments network.

The war in Ukraine has consistently revealed that many developing countries are more interested in the ‘pragmatic’ Sino-Russian model of foreign relations than the U.S.-led Western model which often reinforced liberal and democratic ideology in all spheres of life. The next few weeks and months will likely reveal how the global order will shift in accordance with these changes and propositions.

BRICS
printTweet
You might also like
Back to Top
CHINA US Focus 2022 China-United States Exchange Foundation. All rights reserved.