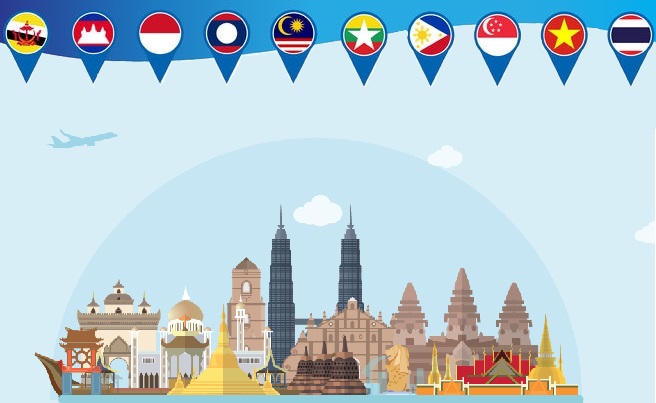 We live in troubled times, with pessimism clouding even the most prosperous parts of the planet. Many are convinced that the international order is falling apart. Some fear that a clash of civilizations is imminent, if it has not already begun.

Yet, amid the gloom, Southeast Asia offers an unexpected glimmer of hope. The region has made extraordinary progress in recent decades, achieving a level of peace and prosperity that was previously unimaginable. And it owes much of this success to the Association of Southeast Asian Nations (ASEAN), which marks its 50th anniversary this month.

Southeast Asia is one of the world’s most diverse regions. Its 640 million people include 240 million Muslims, 120 million Christians, 150 million Buddhists, and millions of Hindus, Taoists, Confucianists, and Communists. Its most populous country, Indonesia, is home to 261 million people, while Brunei has just 450,000. Singapore’s per capita income of $52,960 per annum is 22.5 times that of Laos ($2,353).

This diversity puts Southeast Asia at a distinct disadvantage in terms of fostering regional cooperation. When ASEAN was founded in 1967, most experts expected it to die within a few years.

At the time, Southeast Asia was a poor and deeply troubled region, which the British historian C.A. Fisher had described as the Balkans of Asia. The Vietnam War was underway, and the Sino-Vietnamese War was yet to be fought. Many viewed the five non-Communist states that founded ASEAN – Indonesia, Malaysia, the Philippines, Singapore, and Thailand – as dominoes, set to be tipped over by a neighbor’s fall to communism or descent into civil strife.

But ASEAN defied expectations, becoming the world’s second most successful regional organization, after the European Union. Some 1,000 ASEAN meetings are held each year to deepen cooperation in areas such as education, health, and diplomacy. ASEAN has signed free-trade agreements (FTAs) with China, Japan, India, South Korea, Australia, and New Zealand, and established an ASEAN economic community. Today, ASEAN comprises the world’s seventh-largest economy, on track to become the fourth largest by 2050.

It helped that as ASEAN was getting off the ground in the late 1960s and early 1970s, the strategic interests of America, China, and the bloc’s members converged. But even when the Cold War ended, the region did not erupt into conflict, as the real Balkans did. ASEAN countries maintained the cooperative habits that had become established in Southeast Asia in the 1970s and 1980s.

In fact, ASEAN’s erstwhile communist enemies – Cambodia, Laos, and Vietnam – decided to join the bloc. So, too, did Myanmar, ending decades of isolation. ASEAN’s policy of engaging Myanmar attracted criticism from the West, but it helped lay the groundwork for a peaceful transition from military rule. (Compare this to the West’s policy of isolation toward, say, Syria, which certainly won’t lead to a similar outcome.)

To be sure, ASEAN is far from perfect. Over the short term, it seems to move like a crab – two steps forward, one step back, and one step sideways.

Yet ASEAN’s long-term progress is undeniable. Its combined GDP has grown from $95 billion in 1970 to $2.5 trillion in 2014. And it is the only reliable platform for geopolitical engagement in the Asia-Pacific region, unique in its ability to convene meetings attended by all of the world’s great powers, from the United States and the European Union to China and Russia.

ASEAN continues to face serious challenges. Territorial disputes in the South China Sea have created deep divisions, and the intensifying geopolitical rivalry between the US and China poses a further threat to cohesion. And domestic politics in several member states, including Malaysia and Thailand, is becoming increasingly chaotic.

But ASEAN’s history suggests that the bloc can weather these storms. Its impressive resilience is rooted in the culture of musyawarah and mufakat (consultation and consensus) championed by Indonesia. Imagine how other regional organizations, such as the Gulf Cooperation Council or the South Asian Association of Regional Cooperation, could benefit from adherence to such norms.

The EU once amounted to the gold standard for regional cooperation. But it continues to struggle with a seemingly never-ending series of crises and weak economic growth. Add to that the impending departure of the United Kingdom, and it seems only prudent to seek other models of cooperation. ASEAN, however imperfect, provides an attractive one.

The EU was awarded the Nobel Peace Prize in 2012. But ASEAN’s approach may turn out to be the way of the future, enabling other fractious regions to develop sturdy bonds of cooperation, too.

ASEANAsian SecurityWorld Economy
printTweet
You might also like
Back to Top
CHINA US Focus 2018 China-United States Exchange Foundation. All rights reserved. Disclaimer