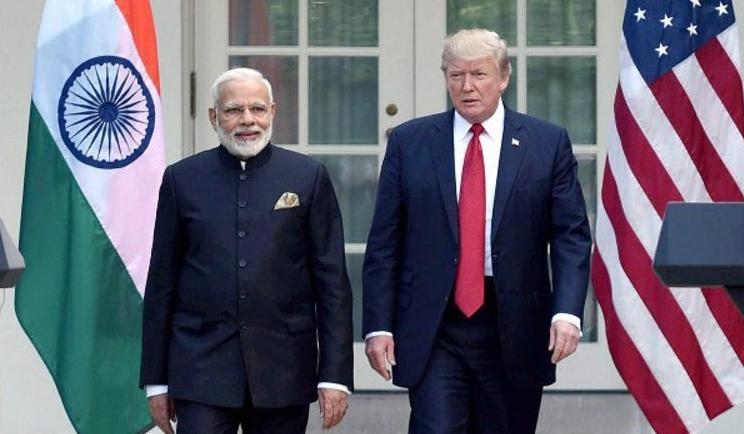 During the call, Trump pledged that the US would continue to be a reliable and long-term supplier of energy to India. File image of PM Narendra Modi and US President Donald Trump at the White House.  (Photo: AP)

The Trump administration has recently touted the idea of a free and open “Indo-Pacific”. The purpose of this is to rally countries with the same values around the United States to contain China’s rise and development. However, this concept is underdeveloped.

“America First” is President Donald Trump’s overarching policy guide, while “Indo-Pacific” is a specific goal. Trump said he wanted to seek new partnerships and cooperation with allies during this Asian tour, in a bid to build an open and free Indo-Pacific. The message reverberated across the region.

When Secretary of State Rex Tillerson and National Security Adviser H. R. McMaster spoke on the Indo-Pacific, people in the U.S. expected President Trump to elaborate on the concept at the APEC leaders’ meeting, and shed a light on America’s Asian strategy in the coming years. However, President Trump merely scratched the surface at the APEC summit, devoting much of his time to how the U.S. was mistreated and taken advantage of in international trade. It remains unclear how the Indo-Pacific concept will be realized, and what the purpose of invoking it is. In short, there is no systemic thinking behind the concept.

As a matter of fact, “America First” is Trump’s one and only strategy, with addressing the trade deficit as its ultimate goal. The “Indo-Pacific” is a secondary priority, and the concept was proposed to help boost President Trump’s low approval rating.

It is not surprising that the quartet meeting between the United States, Japan, India and Australia resulted in no statement of any kind after the meeting. The tone was modest and low-key, probably to avoid provoking President Trump’s next host — China.

The meeting discussed a “free and open Indo-Pacific”, and a rule-based order in Asia, including freedom of navigation, compliance with international laws, interconnectivity, and maritime security, the North Korean nuclear issue and terrorism. The discussions had not much substance and produced little consensus. Participating countries agreed to differ, and issued separate statements after the meeting. India removed freedom of navigation, compliance with international laws, and maritime security from its statement. Japan left out interconnectivity. What are the considerations behind these omissions? Japan’s stance is straightforward, because it is already on board with China’s Belt and Road initiative. Divergences exist within the group on the Belt and Road. The U.S. emphasized that financing must be consistent with international laws, international standards, and principles of prudential financing. Australia endorsed the Belt and Road initiative in its recent foreign policy white paper. India persists in resisting the initiative. Though the group shares largely the same set of values, their interests and policy goals still diverge. Strange bedfellows may find a common goal elusive.

The credibility of the Trump administration is also in doubt. He talked the talk, but walked a different walk. Trump’s main agenda, including trade protectionism, withdrawal from the TPP, renegotiation of the U.S.-ROK trade agreement and NAFTA, is at odds with the “Indo-Pacific” proposition. Therefore, it remains a challenge to rally other countries behind the endeavor to build “a free and open Asia”.

China’s ability to influence international affairs has grown significantly. Ten years ago, it was under the lobby of Japan that the four countries held Director-General level consultations in Manila, with the goal of setting up a new strategic dialogue mechanism. But the attempt came to naught, with only one meeting held, primarily due to opposition from China.

Ten years later, the four countries found that China was their largest trading partner. China plays an essential role in almost every major issue in the region and the world at large, and it is simply unacceptable for the four countries to create a strategic arc to advance political, economic and military cooperation across the Pacific without China, or even to contain China. It didn’t happen 10 years ago, and it will not happen now. In the absence of a feasible mechanism, the “Indo-Pacific” will remain a paper concept, without strategies to back it up.

Mark Twain famously said that history never repeats itself, but it sometimes rhymes. Likewise, “Indo-Pacific” will be a flash in the pan, and is doomed to fade out over time.

Indo-PacificUS-India RelationsAsian Security
printTweet
You might also like
Back to Top
CHINA US Focus 2018 China-United States Exchange Foundation. All rights reserved. Disclaimer