China and the Family of Nations 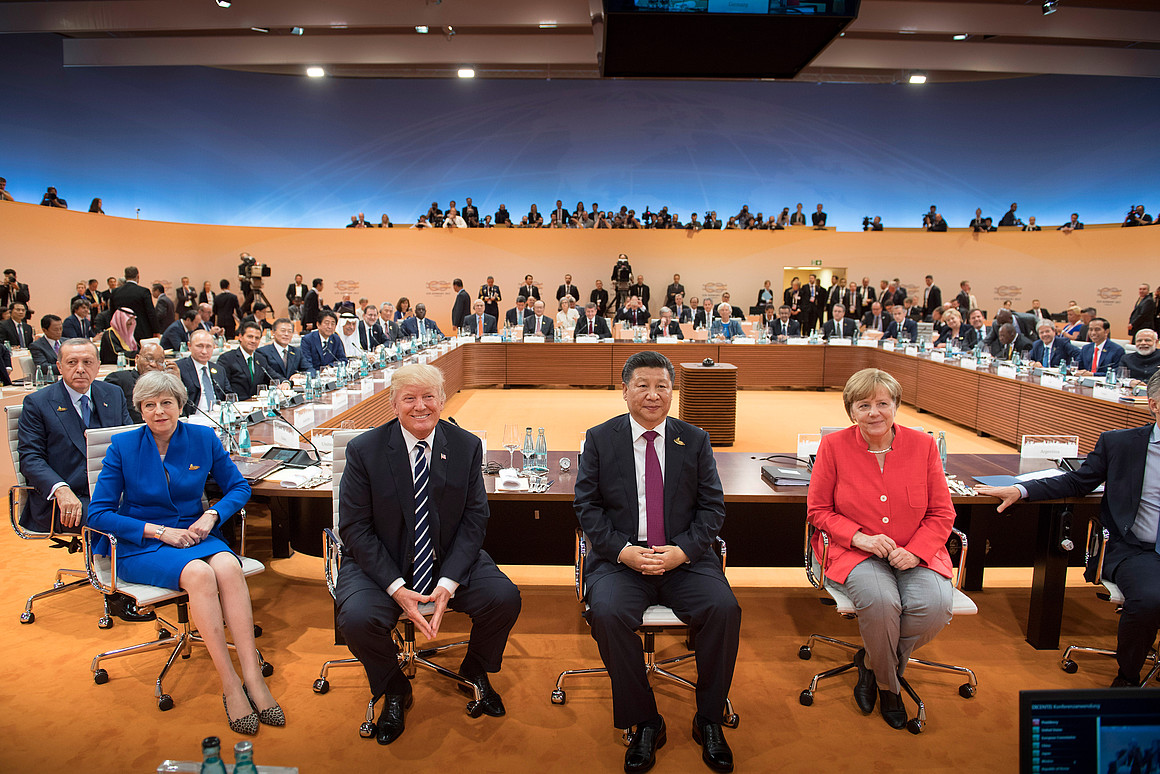 Group photo of the heads of state and government at the G20 Summit just before the first working session. (Bundesregierung/Bergmann)

For more than a century, joining the “family of nations” has been a goal of Chinese leaders. Some are now predicting that China will soon assume many of the leadership roles that the United States is withdrawing from. But it’s not the first time that such opportunities have presented themselves.

In 1919, and again in 1949, Chinese leaders believed they were poised and prepared to join the family of nations and to become a global leader. However, being part of a world order defined and organized by Europeans was not always of interest to the Chinese leadership. In 1793, China’s Qianlong Emperor bluntly dismissed Britain’s request to establish formal international relations. In essence, the Emperor said that China’s Qing dynasty had no need of anything British or of any other good produced by European nations. He concluded the letter by warning that any European merchants who landed on Chinese shores in the future would be immediately expelled. Whatever world order Britain claimed to represent, China wasn’t interested in joining.

By the time of the Opium War (1839-42) the roles were reversed. Europe established itself as militarily and commercially dominant, while China found its share of global production diminishing. It’s in this period, with Europe dominating Chinese interests, that the term “family of nations” arose. In the mid 19th century, Britain, France, and the United States established a system of “extraterritoriality” that denied China its rights as a sovereign state. In effect, the system meant that European (or American) citizens in China would be subject to their own laws, not the laws of China. Writing in the 1850s, U.S. Attorney Caleb Cushing pointed to China’s “sanguinary barbarism” to justify this policy: “I entered China with the formed general conviction that the United States ought not to concede to any foreign state, under any circumstances, jurisdiction over the life and liberty of a citizen of the United States, unless that foreign state be of our own family of nations, --in a word, a Christian state.”

The idea of a family of nations that was mostly white and Christian dominated international diplomacy and U.S.-China relations throughout the rest of the 19th century. China was at war with Britain or France three times during that period. The Boxer Uprising of 1899-1900 seemed to confirm the “sanguinary barbarism” of the Chinese: hundreds of Westerners and many thousands of Chinese—especially Chinese Christians—were killed. The Boxer violence was used to justify continuation of the policy to exclude China from that family of nations. Foreign troops occupied the Chinese capital after putting down the uprising. That the Qing Dynasty did not fall was due largely because foreign powers would rather see it remain enfeebled and in place than deal with the chaos its downfall would prompt.

When the Qing Dynasty did fall, the Republic that arose in its place did so with the intention of joining that family. In his January 1912 “Manifesto from the Republic of China to All Friendly Nations,” the new Republic’s founder, Sun Yat-sen, used the phrase twice as he laid out the new government’s principles. “With this message of peace and goodwill, the Republic of China cherishes the hope of being admitted into the family of nations, not merely to share their rights and privileges, but also to co-operate with them in the great and noble task called for in the great and noble task of upbringing the civilization of the world.”

China attempted to make good its entry into the family by supporting the Allied cause in the First World War, sending more than 100,000 men to Europe where they served in support roles. When the Allies won the war, China attended the Versailles Peace Conference and expected to be confirmed as a global leader in good standing. China instead found itself betrayed, with former German holdings in China given to Japan rather than returned. The former German colonies were eventually given back to China, but the episode symbolized China’s ongoing frustration as it attempted get a seat at the table. The betrayal also triggered demonstrations and protests that contributed to China’s disintegration into civil war. It would be decades before a unified Chinese government could aspire to great power status.

Another world war presented the next opportunity. With Chiang Kai-shek as its leader, China had reunified as Republic, only to be invaded by Japan in 1931 and again in 1937. When the Japanese attack on Pearl Harbor brought the United States into World War II in December, 1941, the United States turned to China as a much-needed ally against Japan. Soon, China’s Chiang Kai-shek, was sitting alongside Roosevelt, Stalin, and Churchill as one of the Big Four. In 1943, the Extraterritoriality that Caleb Cushing had insisted on was done away with. When the war ended China was again on the winning side, with a permanent seat on the newly created United Nations’ Security Council.

But not so fast. This time, internal politics undermined China’s international ascendancy. Chiang’s Nationalists were defeated in a bloody civil war by Mao Zedong’s Communist Party. Mainland China became the People’s Republic. The Nationalists, though fled to Taiwan, and even though they ruled over an area just a tiny fraction the size of the PRC, they took China’s UN seat with them. Instead of representing one-fifth of humanity, China’s UN delegation spoke for just a few million people, and relied almost entirely on the United States for its survival. The PRC, representing almost all of China’s population and territory, did not exist, at least officially, according most countries in the world. For 40 years after the end of World War II, the United States and Soviet Union monopolized international politics, leaving little room for countries—like China—who did not cleave closely to one or the other to exercise autonomy, let alone influence. China, for its part, struggled with internal politics that undermined both its economy and its international standing.

Today, all these circumstances have changed.

So, is China ready to be not only a member of the—now quaint sounding—“family of nations,” but even further, a global leader? For any country to be “in the room where it happens,” it needs to combine economic, strategic, and ideological influence. Clearly, this is the case: China is without question essential to the world economy. Strategically, China’s One Belt, One Road initiative and its Asian Infrastructure Investment Bank show that it is getting other nations to acknowledge its role in international affairs. It’s also worth noting that, for the first time ever, the PRC has troops deployed abroad, at its naval base in Djibouti. Ideologically, China’s leaders remain committed to internationalism.

China would seem to have an opportunity to lead in the form of a Trump administration that is committed to reducing America’s presence abroad—the withdrawal from the Trans-Pacific Partnership and Paris Climate Accords being the two most direct instances.

However, there are still reasons to be skeptical of China’s ability to lead. Although it was quickly walked back, the rumor that China would soon ban the personal VPNs that allow uncensored internet access, is a sign of an insecure state, not of a global leader. Shanghai’s Jifeng Bookstore, one of the most liberal bookshops in the country, announced that it is closing its doors because of censorship and ideological pressure from the government, and it’s not the only one. The Chinese press remains tightly controlled, and academic freedom has been consistently constrained under Xi Jinping’s leadership. Archival access for scholars is less open than it has been in some time, and international meetings that brought scholars in from abroad are now tightly monitored and often controlled. Demonstrations against Xi as he celebrated Hong Kong’s 20th anniversary of repatriation to China highlighted the government’s undemocratic nature and instincts. The tragic death of Nobel laureate Liu Xiaobo in prison highlighted China’s atrocious record on human rights and put the government on the wrong side of comparisons with regimes in South Africa, Czechoslovakia, Burma, all of which released celebrated dissidents. One can easily imagine Caleb Cushing describing Liu’s treatment as “sanguinary barbarism.”

The United States and China find themselves with a similar disconnect between global opportunity and internal weakness. The US remains far and away the world’s most influential nation, culturally, economically, and militarily. Yet, Trump’s “America First” rhetoric leads him to neglect the foreign policy infrastructure in an attempt to pander to his base at home. China, not nearly as strong or influential as the United States but growing much faster, remains hamstrung by internal worries. Democracy has been in retreat across the world for some time, but I find hard to imagine a state that considers Facebook or Twitter an existential threat to be a serious world leader.

Global GovernanceChina’s RiseChina-US Relations
printTweet
You might also like
Back to Top
CHINA US Focus 2018 China-United States Exchange Foundation. All rights reserved. Disclaimer