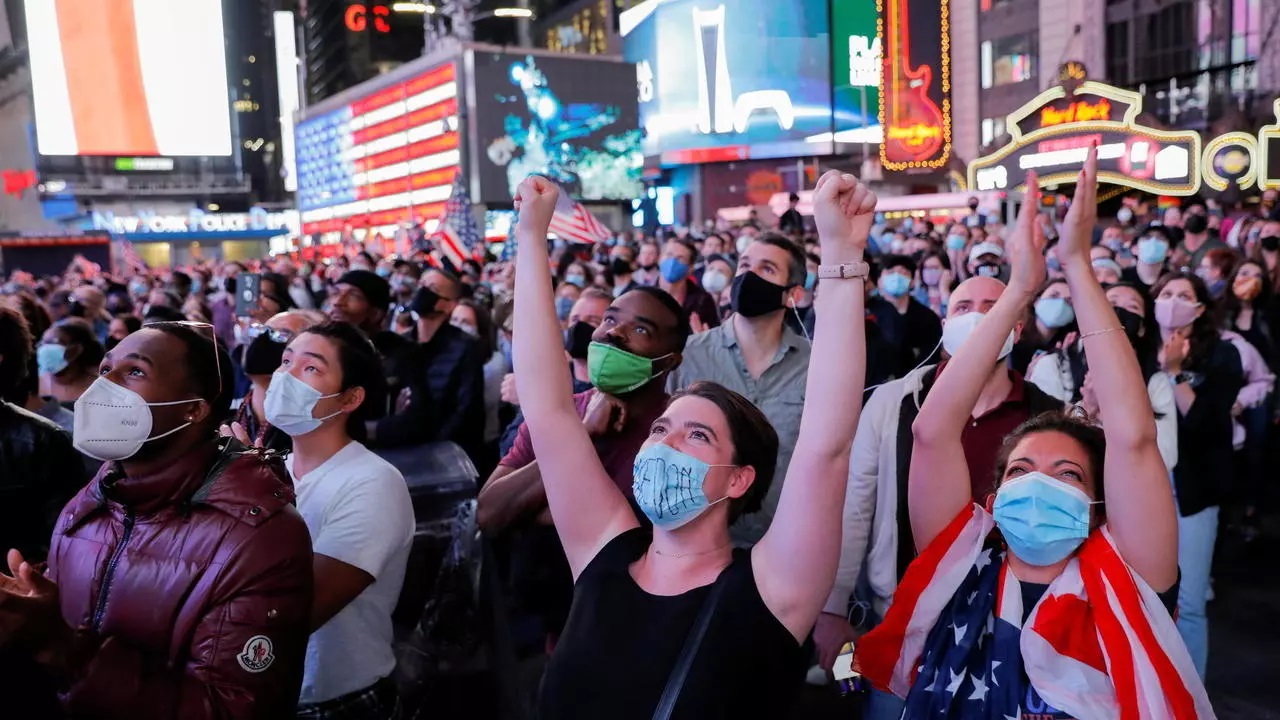 People react as they watch a speech by Democratic 2020 US presidential nominee Joe Biden after news media announced that he had won the 2020 US presidential election, Times Square in New York City, USA, November 7, 2020. Thousands dance in the streets across America to celebrate. © Andrew Kelly, REUTERS

The unexpected coronavirus outbreak in 2020 has been a major test of governance capabilities, exposing many countries’ weaknesses in domestic governance and international coordination and revealing that the global order is far from perfect in the face of 21st century realities.

Though humanity has reached unprecedented heights in science and technology, it remains amazingly fragile in the face of a sudden public health crisis. The downward spiral of China-U.S. relations, on the other hand, has hindered multilateral international cooperation and substantial support from major countries.

The dust of the election in the United States is settling. Judging from Joe Biden’s policy statements so far, he is relatively rational and believes the U.S. should actively participate in international affairs. Yet many people have warned the Chinese side against assuming China-U.S. relations will easily return to the track of cooperation. Some even believe a Biden-led U.S. will deem challenges from China as even more comprehensive and severe and put more emphasis on competition. While it’s still early to tell, most people anticipate a Biden administration will work more with the Chinese side to find ways to resolve differences.

Nor do other countries want the world to become more divided as a result of a China-U.S. conflict. The desire to preserve multilateralism and global cooperation prevails worldwide.

The most significant change in the post-Cold War world has been robust globalization driven by multilateralist ideals. Expansion of global markets and efficient distribution of resources brought humanity into a period of unprecedented, continuous high growth. World economic growth has also dramatically prompted social progress, reducing poverty by a great margin.

Yet globalization is also being scrutinized from new perspectives and has been criticized for job losses and greater wealth gaps in some countries. Voices against globalization, or for deglobalization, have arisen in the international community. But we have no better alternative, forsaking globalization will result in fragmentation of the world and even more chaos.

Mainstream voices are calling for continued globalization, while acknowledging the need for reform and improvement, which entails stable cooperation between such major countries as China and the U.S.

From the Chinese perspective, two issues need to be addressed along with globalization. One is the political aspect. The trajectory of globalization has not been in complete conformity with the original intent of its earliest U.S. and European designers. What they wanted was not only the globalization of a market economy but also the Westernization of all political systems.

The latter has not been accomplished, obviously. Between China and the U.S., political differences have been a bone of contention, and now a source of tension. The U.S. side is disappointed that the kind of political change it expected has not taken place alongside China’s remarkable economic growth.

But the real issue is that the U.S. attempt to incorporate political values into globalization is wrong. Political globalization has lost momentum, especially after a heavy price was paid in the abortive attempts to transform Afghanistan and Iraq. In future endeavors to promote globalization, the unrealistic political goals attached to it need to be adjusted.

The Chinese side also needs to improve its persuasiveness in helping the international community better understand and appreciate the Chinese system and achievements. This will cultivate a stronger sense of community, as well as a consensus that each country is entitled to whatever system it deems to be correct.

By embracing economic globalization, China has maneuvered earth-shaking changes in both nation-building and society. But the U.S. and some other countries are upset over China’s achievements, believing it has taken advantage of the process through unfair competition. The Trump administration treated China rudely with tariff hikes, although the phase one deal eased the confrontation a bit.

Biden has also raised questions about structural reforms in China, which has resolutely opposed U.S. bullying and resisted decoupling, especially in science and technology.

Tensions between China and the U.S. and the atmosphere of confrontation, have caused widespread worries in the international community. Such problems need to be properly resolved by both countries in an atmosphere of reason. The Chinese side is working hard to improve compliance awareness at home, enhance law enforcement capacity and improve the market environment via reforms.

But China will fight unilateral practices, even as it needs to upgrade its own capabilities for participating in world affairs and contributing to economic globalization. Chinese Foreign Minister Wang Yi said in a speech on Nov. 7 at Tsinghua University that strengthening and improving global governance is a pressing imperative. In facing common challenges, the choice between unity or division, opening-up or seclusion, cooperation or confrontation, will test humanity’s wisdom, conscience and courage, he said.

China has gradually grown from a learner in the beginning to become an important participant in economic globalization. It is now striving to become one of the leading forces encouraging international cooperation.

The international community’s consensus- and mechanism-building on climate change has been exemplary, and China has turned out to be an important participant and a driving force. Its outstanding performance in pandemic containment has created favorable conditions and capacity for China to promote global defense against COVID-19, which should also be a priority area for future China-U.S. collaboration.

If the next U.S. administration can invest seriously in international cooperation, China and the U.S. should be able to find new paths for joining hands. Together, they can help humanity defeat the pandemic and return to a normal track, and they can play a critical role in improving global governance and promoting healthy progress.

This is also what other countries hope to see.

Global GovernanceCOVID-19U.S. Presidential ElectionGlobalization
printTweet
You might also like
Back to Top
CHINA US Focus 2023 China-United States Exchange Foundation. All rights reserved.