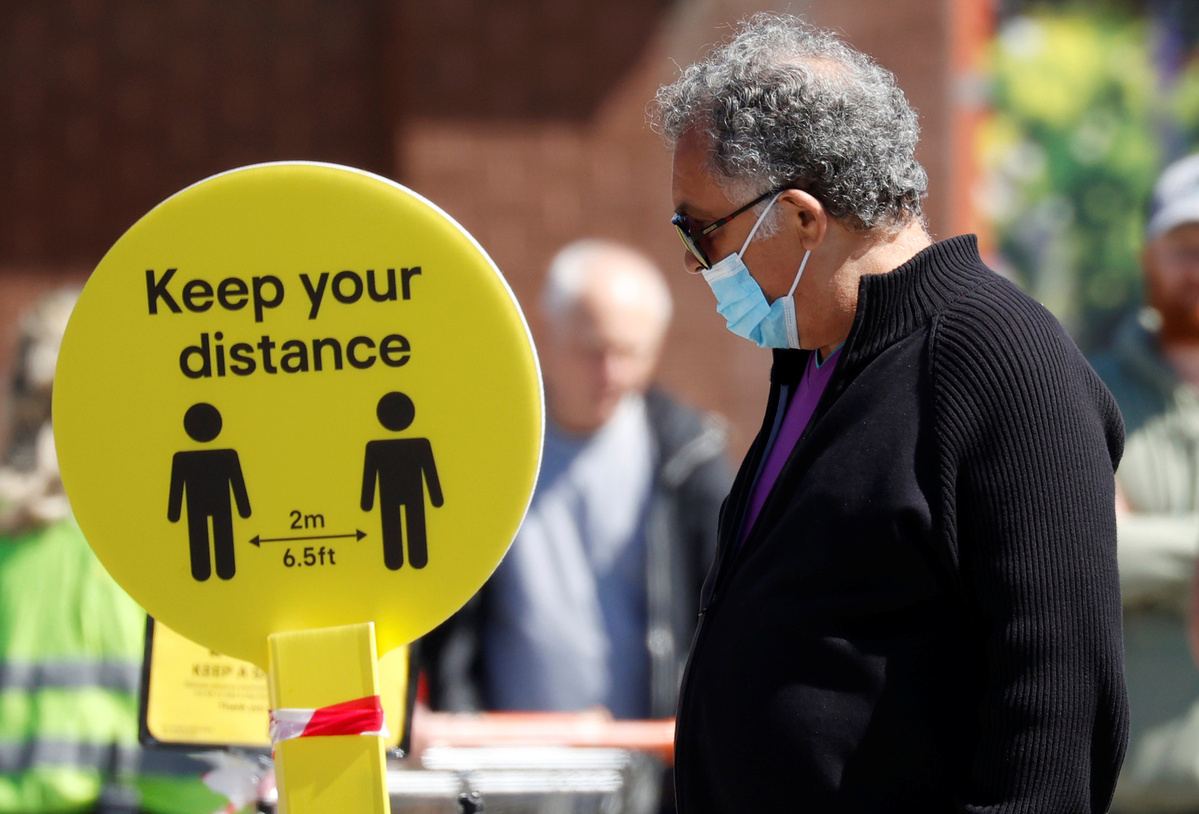 “Keep your distance.” A man wearing a protective face mask queues at a B & Q store in Liverpool, Britain on May 6, 2020.

The coronavirus pandemic is having a far-reaching and significant impact on the global economy. Since the beginning of the 1980s, globalization has progressed very fast, reaching its apex at the turn of this century. The epidemic itself may not be able to derail the globalization process, but it will certainly slow it down.

The 2008-10 global financial crisis marked a turning point for the process. In the decades before 2010, world trade had grown faster than the global economy, with trade and investment liberalization reaching unprecedented levels. No such fast growth was recorded after that, and world trade has remained stagnant. Although the world economy maintained relatively stable growth, actual trade volume dropped slightly.

Even before the coronavirus outbreak, many factors had already contributed to plunge globalization to a low ebb. Ever since U.S. President Donald Trump was sworn in, he has been pursuing unilateralism and protectionism and preaching deglobalization under his doctrine of “America first.” The Trump administration had withdrawn from the Trans-Pacific Partnership agreement. It imposed punitive tariffs on imports of steel, aluminum and other products using the excuse of national security and triggering rounds of retaliation and trade barriers. It launched the trade war with China by levying higher tariffs on imports of Chinese commodities, leading to a sharp decline in bilateral trade. It imposed numerous sanctions on many countries, which suppressed trade growth. And it advocated a policy of big-power rivalry, which caused disruptions in global supply chains.

All this shows that globalization had been at low ebb even before the coronavirus pandemic struck. The pandemic, however, further weakened the globalization process, which slowed down and even regressed. This could be reflected by the following:

First, global trade declined. The economies of all countries temporarily lost steam, and global supply chains were seriously disrupted. A decline in global trade this year, therefore, is inevitable. According to the World Trade Organization, the global merchandise trade will plummet by 13 to 32 percent in 2020, a decline greater than the anticipated drop in global GDP. Moreover, world trade will face downward pressure for the foreseeable future.

Second, the pandemic has become a catalyst driving people to reflect on the whole concept of globalization. The public health crisis exposed risks arising from overseas outsourcing of spare parts for cost reduction and made people reflect on the shortcomings of the globalization process. French President Emmanuel Macron said the coronavirus epidemic “will change the nature of globalization, with which we have lived for the past 40 years.” He added that “it was clear that this kind of globalization was reaching the end of its cycle.” On the issue of trade dependency, European Trade Commissioner Phil Hogan said, “We need to think about how to ensure the EU’s strategic autonomy.”

Third, post-pandemic adjustments to supply chains have become a priority for many countries. Because of the enormous economic benefits, the pandemic will not erase supply chains, but generally speaking, distribution adjustments in the supply chain will be made in the following three aspects:

• Diversifying. By reducing foreign dependence on products, a new pattern under which no single country monopolizes the supply of any products should be established.

• Risk mitigation. Many countries are pondering a redistribution of production bases of major components and spare parts to put production closer to consumers. This could drive up the costs of the products, but it is a sacrifice that has to be made to guarantee the safety and balance of demand and supply.

• Reshoring. For enterprises of strategic significance that were relocated overseas for environmental or financing reasons earlier, it’s now time to have them move back to their home countries. The adjustments, however, would have to strike a balance between the market widening and interdependence, and between “health sovereignty” and safety; otherwise, it could easily lead to protectionism. Even if a balance were intrinsically achieved, the adjustments could still lead to slowdowns in globalization.

Fourth, the enhanced review and examination system for foreign investments will hinder capital flows. After the pandemic, major Western countries will likely follow the practice of the United States in tightening the examination and control of foreign investments in their core sectors, in an attempt to prevent outflows of their high-end technologies and the weakening of their competitiveness.

China has adopted more opening measures and lifted restrictions on the stake percentage for foreign investors, but developed nations including the United States have set new and higher barriers for accessing their markets. The consequences are that free flows of capital and the market distribution of production factors will be restricted, thus slowing the globalization process.

Fifth, the United States announced a series of “de-Sinicization” and deglobalization measures during the epidemic. In an attempt to divert attention away from its failure to properly combat the pandemic, the Trump administration has tried every possible means to blame China and has turned hawkish against China to please voters. The U.S. has advocated the reshoring of American enterprises from China and attempted to pursue an economic decoupling.

It has threatened to impose new tariffs on Chinese products and directed the Federal Retirement Thrift Investment Board to stop investing in China. It announced updated sanctions against China’s Huawei Technologies by preventing global chipmakers from supplying semiconductor components to Huawei. And it planned or pushed for relevant legal acts relating to the delisting of Chinese companies from the U.S. stock markets. For international trade and global supply chains that were seriously affected by the pandemic, the measures and tricks by the U.S. have made the situation even worse, and will further hinder the globalization process.

It’s natural that globalization has ups and downs. When it’s on the upward trend, capital that was the primary driving force for globalization and new technologies would help achieve the global division of work and cooperation in production, trade, investment and marketing. When it is on a downward trend, however, government intervention becomes inevitable. It replaces the invisible hand of the market by resorting to administrative tools such as sanctions, tariffs, suspension of supplies and restrictions to obstruct or delay trade and the free flow of capital, thus forcing globalization to shift into low gear and decelerate.

But when the globalization is at low ebb, it does not mean the end of the process. It’s just a temporary pause or reversion. In the face of the sluggish globalization process, the solution is to adhere to opening-up, improve the business environment and constantly strengthen the efficiency and stability of supply chains. Part of the solution is to promote trade and investment liberalization and facilitation as well regional economic integration, such as the Regional Comprehensive Economic Partnership, or RCEP, and the free trade agreement entered by China, Japan and the Republic of Korea.

It is imperative to follow the road of win-win cooperation in solving deep-rooted problems, such as those of inadequate inclusiveness and imbalance, and to jointly build a world economy that is open, inclusive, balanced and benefits all.

It is also worth mentioning that it will take a very long time to be rid of the negative impacts caused by the deglobalization policies of the United States and bring the process back onto the right track again.

GlobalizationCOVID-19Global Governance
printTweet
You might also like
Back to Top
CHINA US Focus 2022 China-United States Exchange Foundation. All rights reserved.