How China Will Benefit from North Korea’s Denuclearization Process 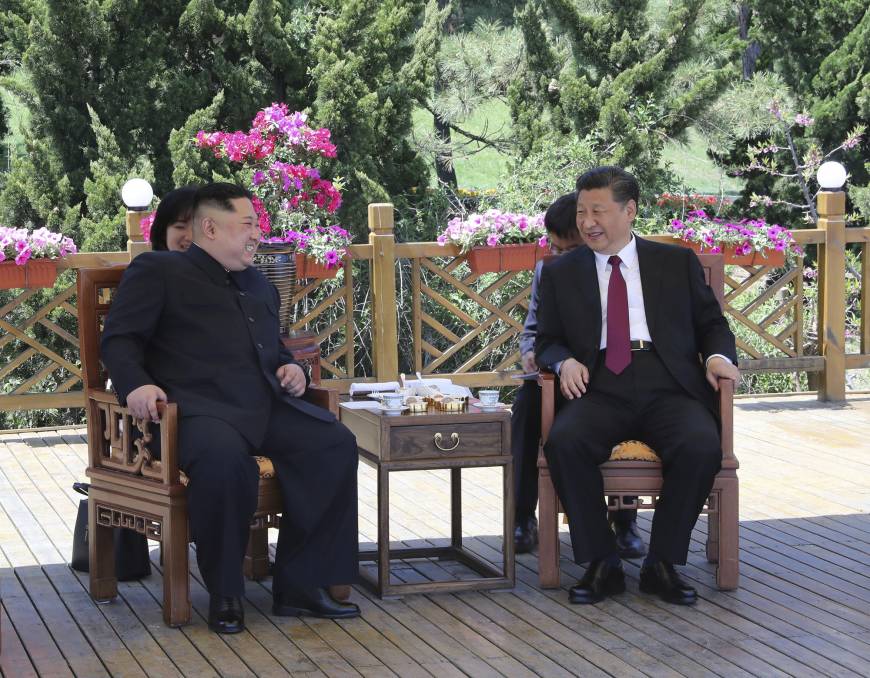 The specter of a U.S.-China trade war, with the bulk of President Donald Trump’s latest tariffs scheduled to take effect from July 6, should not distract us from paying critical attention to what Beijing might have gained from the recent summit in Singapore on North Korea’s denuclearization. China indeed hopes to reap major diplomatic dividends from what promises to be a complex and long process to denuclearize North Korea. Full denuclearization may not even be possible. Yet, whatever happens, Beijing is intent on being a major beneficiary of the process.

North Korean leader Kim Jong Un may have emerged politically stronger from the Singapore summit merely because the world’s most powerful leader met him virtually as an equal. But critics are wrong in claiming that Trump made “big concessions” in exchange for securing vague commitments from Kim. The only concession Trump made— suspension of war games as a gesture of good faith— is easily reversible if negotiations do not yield progress toward denuclearization.

However, as Trump’s post-summit announcement to suspend U.S. war games with South Korea underscored, he is seeking to narrowly advance American interests, especially saving money — a factor that he said could eventually lead him to bring back home the 32,000 American troops stationed in South Korea. Such a dilution of U.S. security commitments in northeast Asia, if it were to happen, would aid the interests of China, which is seeking to weaken the American alliance with South Korea so as to extend its regional influence.

In fact, suspension of the U.S.-led war games was proposed by Beijing last September to secure a North Korean moratorium on nuclear and missile testing. This reciprocal de-escalation formula, rejected by the Trump administration, came to be known in the U.S. as “freeze for freeze.” Kim, however, in April unilaterally declared a test moratorium without any reciprocal concession to help pave the way for a summit with Trump.

Still, Trump has correctly described the U.S.-led war games as “very provocative,” which, with live-fire drills, simulate a full-scale invasion of North Korea every spring. U.S. critics are upset that he has lifted the pretense that these war games are routine “military exercises” and defensive in nature. When Trump last August threatened to rain “fire and fury like the world has never seen” on North Korea, his critics at home accused him of leading the U.S. to war. But today, after he became the first sitting American president to meet a North Korean leader, they are charging him with moving too quickly to peace.

The fact is, however, that the interests of the U.S. and China fundamentally diverge on North Korea. So, clearing the path to peace and disarmament on the Korean Peninsula will not be easy.

Beijing, which values North Korea as a strategic buffer against the U.S. military presence in South Korea, is suspicious of Kim’s overtures to America. For its part, the U.S., by seeking to clinch a deal directly with Pyongyang, would prefer to effectively cut out the traditional middleman, China. The White House has deepened Beijing’s suspicions by establishing a direct phone link — virtually a hotline — with Kim. However, U.S. Secretary of State Mike Pompeo’s post-summit visit to Beijing underlined the American effort to co-opt China, given its leverage over North Korea.

Just as China formally turned against the Soviet Union after the Nixon-Kissinger opening in the early 1970s, Beijing fears that North Korea could similarly flip allegiances by distancing itself from China. Kim, however, seems more interested in achieving a limited goal: rebalancing his foreign policy by mending fences with different powers so as to reduce North Korea’s dependence on China.

Under Barack Obama, the U.S. helped to end Myanmar’s international isolation, with the president paying a historic visit to that county in 2012. The shift in U.S. policy allowed Myanmar to cut its dependence on China and open its economy to Western investors. Now Trump has reached out to another isolated state, North Korea, which is eager to end its international pariah status.

North Korea — with its vast resources of iron ore, magnesite, copper and other minerals — is resource-rich like Myanmar, whose natural reserves range from oil and gas to jade and timber. Resource-hungry China has been the dominant importer of natural resources from both of these countries. North Korea, however, is different from Myanmar in two important aspects. It is armed with potent nuclear and missile capabilities. And it is a homogenous and regimented society, in contrast to diverse Myanmar, which is the seat of the world’s longest-raging civil war that has pitted the ethnic-Burman majority against many of the minority groups since 1948.

Trump is right that, at this stage, fundamentally changing the U.S.-North Korea relationship matters more than denuclearization. If the West encourages Kim’s efforts to modernize the North Korean economy, just as it aided China’s economic modernization since the late 1970s, it will help to moderate Pyongyang’s behavior. Economic engagement can achieve a lot more than economic sanctions, which counterproductively accelerated North Korea’s nuclear and missile advances.

Progress toward denuclearization, however, will be slow to come. The Trump-Kim joint statement issued at the end of the summit implicitly links denuclearization to “mutual confidence building.” What has been set in motion is a complex, lengthy process of bargaining, deal-making and, if all goes well, denuclearizing.

No less important is the joint statement’s reference to the denuclearization of the Korean Peninsula, not just North Korea. This goal, in effect, means a nuclear-weapons-free zone, whose creation demands not just North Korea’s denuclearization but also important concessions by the U.S. and South Korea (and also by the other two nuclear powers in the region, China and Russia). Yet this key outcome is being glossed over in the American debate.

A nuclear-weapons-free zone can emerge only if South Korea steps out of the U.S. nuclear umbrella and the U.S., China and Russia formally commit not to introduce, or threaten to use, nuclear weapons on the Korean Peninsula.

Beijing has used its influence with Pyongyang as leverage against Washington in the China-U.S. trade dispute, which explains why Trump waited until after the Singapore summit to announce a planned 25% tariff on $50 billion of imports from China. But much before Trump met Kim, Chinese President Xi Jinping, alarmed by the direct contact Washington had established with Pyongyang, worked hard to put China back in the picture by seeking to influence the North Korean position in the talks with America. Xi twice hosted Kim within a span of 40 days. And, a week after the Singapore summit, Kim made a third visit to China to brief Xi on his discussions with Trump.

It is likely that Xi was pleased with the Singapore summit results, because they were broadly in line with what Beijing wished to see. An hour before Trump announced the suspension of war games, the Chinese foreign ministry spokesperson crowed, “The China-proposed 'suspension for suspension' initiative has been materialized.” This meant Beijing had been kept in the loop by the North Koreans.

China is positioning itself to derive continuing diplomatic benefits from what promises to be a long-drawn-out process to denuclearize North Korea. Trump has acknowledged that “it does take a long time to pull off complete denuclearization.” A stretched-out denuclearization process greatly suits China. It will allow Beijing to play the North Korea card with the U.S. while it stakes out a key role for itself by leveraging its status as a linchpin to keeping Pyongyang under economic pressure. More ominously, U.S. preoccupation with North Korea (and Iran) could aid China’s territorial and maritime revisionism in the Indo-Pacific region, including consolidating its hold on the South China Sea.

Trump-Kim MeetingNorth KoreaDenuclearizationKorean Peninsula
printTweet
You might also like
Back to Top
CHINA US Focus 2022 China-United States Exchange Foundation. All rights reserved.