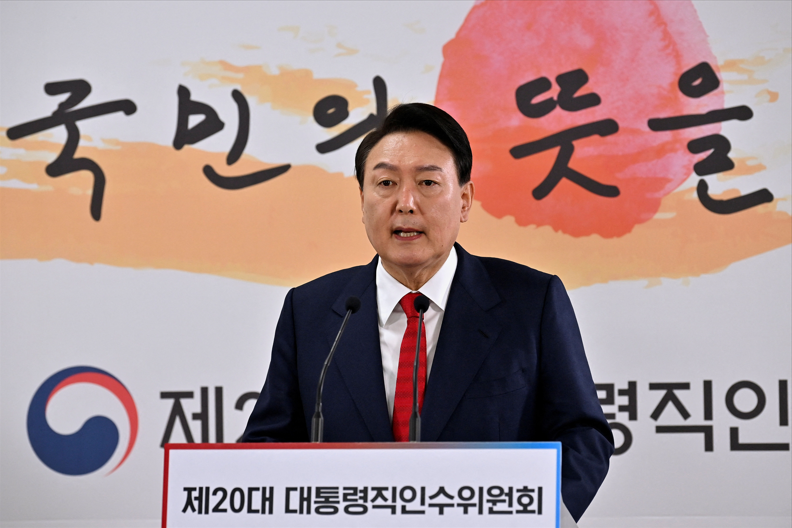 Conservative Yoon Suk-yoel was recently elected president of the Republic of Korea, and the direction of Korean diplomacy has naturally attracted close attention. Some We Media writers even predict that the country will become a sort of Asian Ukraine. Obviously, the ROK has national conditions and a geographical situation very different from those of Ukraine, so they defy simplistic analogies. The underlying concerns, however, are not groundless.

During the campaign, Yoon’s team proposed that the ROK should abandon strategic ambiguity between China and the U.S., strengthen its alliance with the latter as a top priority and pursue additional THAAD deployments. Moves taken by the president-elect suggest that those propositions were not just election rhetoric. Members of the diplomatic and security team identified by the new administration are all pro-American. The president-elect’s delegation, dispatched to the U.S. in early April, expressed the wish to build a comprehensive alliance, strengthen extended deterrence and join the Quad. It even wanted the U.S. to deploy nuclear submarines, strategic bombers and other strategic weapons in the ROK. Given the conservative camp’s long-standing criticism of the Moon Jae-in administration’s deference to China and North Korea, the incoming administration has vowed to emphasize mutual “respect” vis-a-vis China and “principles” vis-a-vis North Korea. This all speaks for itself.

First, increased competition between major powers and the threat posed by the DPRK have exacerbated the ROK’s sense of insecurity. Korea is situated geographically between major powers and remains divided, which has given the nation a natural sensitivity to changes in the international landscape. The conflict between Russia and Ukraine has further spurred demands from both ROK elites and the public for deeper ties with the U.S.

Although there are people arguing that Ukraine's lessons should be learned, and that a careful balance should be maintained with regard to the major powers, the conservatives believe the U.S. will remain the No. 1 technological and military power for a long time and thus find it necessary for the ROK to bind itself firmly to America to avoid any possibility of being abandoned.

Clearly, there is no pro-China line in South Korea; mainstream diplomatic propositions are either for independence or pro-American. The former school maintains that the ROK should not blindly dance to the rhythm of major powers, but should act in its own interests and have a greater sense of ownership in foreign affairs and national defense.

The progressives mostly follow this line of thinking. The pro-U.S. school pursues deep bonds with the U.S., relying on the latter to improve the ROK’s diplomatic and security circumstances. The conservatives are generally more pro-American. Moreover, the two schools of thought are not entirely distinct: The pro-autonomy group sees the alliance with the U.S. as the foundation, while the pro-U.S. group also stresses the need to enhance the ROK's own national defense and diplomatic capabilities by relying on the alliance with the U.S. They have other similar foreign and defense policy propositions as well.

Second, the U.S. has long-standing influence in terms of ideology and nation-building. South Korean citizens and political elites have a deep-rooted gratitude for being remade by the U.S. and a greater appreciation of American values and ideology. The long alliance has borne fruit in the form of deep economic, technological, interpersonal, social, ideological and cultural ties. Moreover, both carrots and sticks are more and more used by the U.S. to induce the ROK to take its side.

Third, domestic political factors are at work. As it is difficult to make any new breakthroughs in domestic policy, the conservatives hope to win elections and consolidate their ruling position by strengthening the U.S.-ROK alliance and gaining American support. After all, America’s subtle influence is felt everywhere. To gain popular support, conservatives in the campaign repeatedly criticized Moon for bowing to China and North Korea. If that had been the case, however, the DPRK would have long cooperated with the Moon administration. As a matter fact, the North has conducted no cooperation whatsoever with the South since 2019.

With regard to China, the Moon administration has not removed any THAAD systems and in recent years has steadily advanced cooperation with the U.S. on matters involving China. This is far from being pro-China as alleged.

The ROK seems to have reached the point of no return in making diplomatic adjustments. However, the strength and direction of the adjustments are not fully settled and will continue to depend on interactions between the parties concerned and the circumstances at home and abroad.

An important influence in ROK diplomacy is the notion of domestic checks and balances. Yoon Suk-yoel won by a narrow margin of 0.7 percent, the slimmest in history. The progressives will continue to hold the majority of seats in the ROK National Assembly until at least 2024. Moreover, despite being well disposed toward the U.S., most ordinary South Koreans, elites and vested economic interests do not want their country to be at the forefront of a conflict between major powers. All of these will play a balancing role to certain extent.

From the perspective of geopolitical gamesmanship, choosing sides between major powers undoubtedly means abandoning the northern diplomacy policy followed since the late years of the Cold War by the ROK, which will play right into the DPRK’s hands.

As its national strength and self-confidence grow, the ROK naturally wants to play a bigger role in international and regional affairs. This is essentially no different from the Moon administration’s pursuit of strategic autonomy. However, elevating its own importance by drawing close to the U.S. in all fields will undoubtedly lead to a paradox and constrain the space and flexibility of Korean diplomacy. The interests of the two countries are not exactly the same after all.

Nor are Chinese and Korean interests entirely different. In the range of regional and global affairs, China has played a positive role in maintaining peace, promoting development and providing public goods, which embodies a huge space for common understanding with the ROK, a country longing to be an active and important member of the international community.

South KoreaKorean PeninsulaGeopolitics
printTweet
You might also like
Back to Top
CHINA US Focus 2023 China-United States Exchange Foundation. All rights reserved.