How Far Can the US-Russia Détente Go?

As he did during the presidential campaign, President Donald Trump has adopted an extremely pro-Russian stance. This is evidenced by a recent hour-long phone conversation with President Vladimir Putin, during which he conveyed three important messages. First, his desire to strengthen cooperation and reach agreement over their joint fight against international terrorism and the crisis in Syria. Despite having previously accused the US of double standards in its counter-terrorism efforts, Putin stated that he views the US as Russia’s most important partner in the fight against international terrorism. Second, Trump expressed his wish to strengthen communication and establish “a partnership cooperation” for dealing with major international issues such as Ukraine, the Iran nuclear deal, the North Korean threat and the Arab-Israeli conflict. Third, he conveyed his ambition to promote the stable development of US-Russia relations on a “constructive, equal and mutually beneficial” basis, with special emphasis on the importance of “mutually beneficial economic-trade links” between the two countries. If these intentions are realized, it will represent a turning point in US-Russian relations. 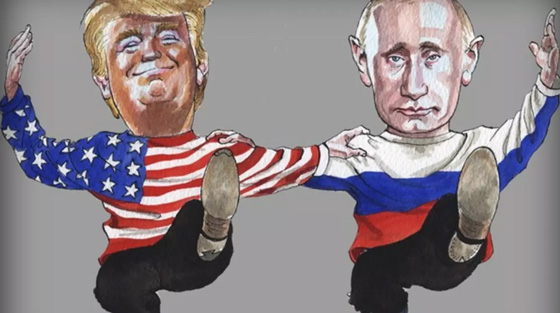 On Feb 2, Trump made a further goodwill gesture toward Russia when his government announced changes to the sanctions against the Russian Federal Security Service imposed by the Obama administration, thereby allowing US companies to sell some information technology products to the agency. This was a practical step toward easing sanctions on Russia and improving US-Russia relations.
Before Trump, previous US presidents viewed Russia as a strategic opponent and threat to US national security, and therefore sought to contain it. President Obama imposed severe sanctions on Russia and expelled a large number of Russian diplomats in response to the country’s invasion of Ukraine and interference in the US presidential election, leading to a serious deterioration in US-Russia relations, and creating the climate for another Cold War. The words and deeds of Trump and his advisors toward Russia, however, could hardly be more different from those of his predecessor, signaling a thaw in relations.

There are many reasons for Trump’s reversal and soft approach to Russia. The first is to reciprocate and thank Russia for helping him win the election. Russia clearly took sides in the US presidential election, with the government and people unanimously supporting Trump and denigrating Hillary Clinton during the campaign. Whenever Trump looked to be doing badly in the polls, Russian hackers exposed information to smear Clinton and improve Trump’s position, which ultimately led to the defeat of his opponent. It is widely believed by the US public that Trump relied on two factors to win the election: a wave of populist support from within the United States, and help from a network of Russian hackers. Trump is well aware of the unique role Russia played in his election victory, and his delight in paying debts of gratitude as weak as revenge ensure that he will repay this kindness.

The second reason is for close economic ties. As a businessman and entrepreneur, Trump has had many business dealings with Russia over the years. He has been to Russia five times to promote his business activities, particularly real estate deals, and Russia has directly assisted his business there. According to media reports, there were several when Trump businesses encountered financial difficulties, with some going bankrupt. Unable to secure loans in the United States, Trump has mainly relied on Russian money to see him through hard times. This is not something he is likely to forget.

The third reason is his own ideological leaning. Trump is a maverick businessman and an anti-establishment figure with no political experience. He does not understand and has only disdain for the views of the Washington elite that Russia is the main security threat and strategic opponent of the US as well as for the “politically correct” anti-Russian strategy. He sincerely believes that Russia is his friend and benefactor, and that he has found in Putin a kindred spirit. He has praised Putin for ruling with an iron fist and being a “strong leader”, and the two have established a good personal relationship. As such, Trump is determined to do things his own way, reversing the hostile approach of his predecessor and taking an outspoken pro-Russian stance.

The fourth reason is Russia’s clever support for Trump. Russia not only helped Trump win the presidential election, but has reacted positively to Trump’s subsequent words and deeds toward Russia. Russian senior leaders continue to insist that Russian hackers did not interfere in the US presidential election, thereby helping Trump to extricate himself from the embarrassment of his Russian support. Following Obama’s expulsion of 35 Russian diplomats for the country’s interference in the US presidential election, Putin ruled out a tit-for-tat response, refusing to expel US diplomats in Russia, which drew praise from Trump. After Trump was elected, Putin was the first foreign leader to call to congratulate him. On Jan 28, Putin spoke to Russian specialists at length about Russia’s relationship with the US, saying that Russia had supported the US for more than two centuries, highlighting their position as allies in World War II and Russia’s view that the US is its most important partner in the fight against international terrorism. Putin has also been effusive in his praise for Trump, calling him a clever and talented man. All of this has encouraged Trump’s favorable stance toward Russia.

Trump’s feelings toward Russia are not superficial but heartfelt. During his time in office he will relax and possibly abolish sanctions against Russia, and to a certain extent, he will mend the relationship between the US and Russia by strengthening bilateral cooperation in the areas of counter-terrorism and trade. Nevertheless, the core and fundamental framing of US-Russia relations, namely the characterization of Russia as a major threat and strategic opponent of the US and the need for the US to contain Russian, enjoys bipartisan consensus and is a mainstream opinion in US society. This is determined by the collective will and by the US ruling class, the “monopoly bourgeoisie”, and not simply by the president of the United States. Leaders of both parties in the US have recently criticized Trump for his excessively pro-Russian stance.

Trump is not naïve. He knows that he must develop relations with Russia slowly and can only go so far; otherwise, his position will become untenable. As long as Russia continues with its established international strategy, Trump will not fully deliver on the messages he is conveying to Putin. US-Russia relations can only improve a certain amount during his presidency; there will be no major or sudden change. The US cannot fundamentally alter its anti-Russian strategy, and developments in US-Russian relations will be limited.

US-Russia RelationsDonald TrumpPutin
printTweet
You might also like
Back to Top
CHINA US Focus 2018 China-United States Exchange Foundation. All rights reserved. Disclaimer