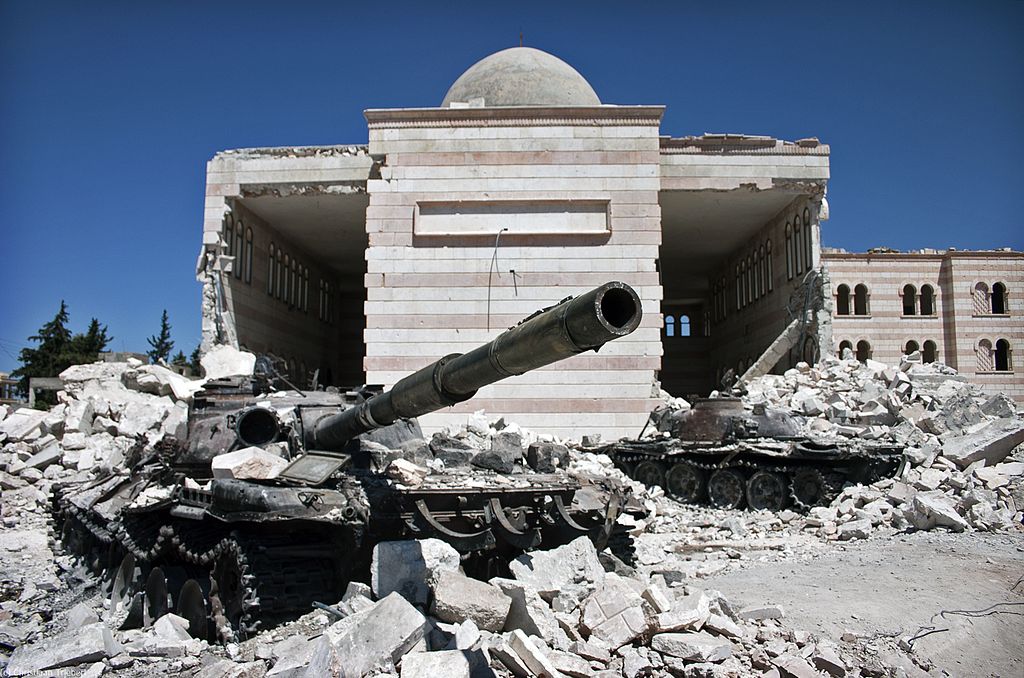 The Syrian government has just announced full recovery of the Eastern Ghouta area, scoring a major military success. But government troops have not eliminated all opposition forces in the region, thousands of anti-government fighters just "peacefully" withdrew to their base camp - Idrib Province in northwest Syria. Whether and when the Syrian government will be able to wipe out all rebel forces nationwide and put an end to the already 7-year civil war remains a to be seen.

The Syrian civil war is a proxy one for the US and Russia. It is at the same time the only regional hot war the two countries have participated in directly. The civil war in Syria will stretch on because of the endless geopolitical rivalry between the two countries.

First, the win or loss of their proxies is closely associated with significant US and Russian strategic interests, with both of them determined to win.

For the US, after doing away with Saddam Hussein and Muammar Gaddafi, Bashar al-Assad has become its only challenger in the Arab world. By turning Syria into a pro-Washington country, the US can dominate the Middle East. Meanwhile, Syria is the only remaining frontier country to confront Israel, who is "custodian" of US strategic interests in the Middle East. Assad has thus been a thorn in the US' side. The current US administration has actually inherited the Obama administration's policy and aims to overthrow Assad and realize regime change in Syria. For Russia, Syria is its sole sphere of influence and strategic space in the Middle East and outside of the Commonwealth of Independent States, and the Russia military base at Syria's Tartous port is its only foothold in the Mediterranean Sea. Preserving the pro-Russia Assad government is critical to Russian national security and major-power status.

Both countries have invested heavily in Syria, and neither wants to give up easily.

The US has been equipping and financing anti-Assad forces for seven years, carrying out large-scale air strikes on government forces, and helping opposition forces seize more than half of Syrian territory. Russia's forceful intervention has reversed the situation. But the US has increased investments in Syria, sending in more troops, and expanding bases and security zones in the name of fighting terrorism. Russia, on the other hand, would not stop military intervention in Syria considering the moral and legal advantages of its military actions in the country. Not to mention it has paid dearly in the largest military operation outside Russian territories. With neither party ready to back down, the wrangling over Syria may prove endless.

The impasse may drag on as neither wants to give in or directly confront the other.

There may be three possible outcomes to the Syria crisis： one is Assad emerges victorious and he remains president, or, with Assad's nominal resignation, a pro-Russia, pro-Assad government is organized; second is anti-Assad forces emerge victorious, taking the place of the Assad government, or organizing a pro-US coalition government; third is, with the overthrow of Assad, a neutral government friendly to both the US and Russia is formed. The former two possibilities are respectively against US and Russian interests, and will hence not be acceptable. The third may be acceptable to the US but not to Russia, because a so-called neutral government may finally get closer to the US and its allies thanks to their overall strength and influence. What the two cannot get in the battlefield may not be achievable at the negotiating table either. While both directly participated in Syria's civil war, the US and Russia have tried hard to avoid confronting each other militarily, because neither can afford the subsequent cost of direct engagement. Their standoff in Syria, however, will persist.

The US and Russia did not plunge into Syria's civil war alone. The US-led camp includes European allies, Gulf countries like Saudi Arabia, and Israel; the Russia-led camp, besides Syria, includes Iran and Hezbollah. Members of both camps have their own interests in Syria. The US and Russia have to consider their allies' concerns on major policy issues, making resolution of the crisis a protracted process.

Whoever started the trouble should end it. The key to ending the civil war in Syria is in the hands of outside powers. The crux is the US and Russia should stop their geopolitical game in Syria, respect its independence, sovereignty, and territorial integrity, and let the people of Syria choose their own path of development, political system and political institutions. President Trump said recently that US military operations in Syria were costly and gained nothing for his country, and expressed the hope to withdraw as soon as possible. If that's the case, it will create favorable conditions for all parties to realize the UN-proposed truce, re-open negotiations under the auspices of the UN, and to find a fair, reasonable and peaceful solution to the crisis. This will also be a wise choice for the US to stop losses in Syria.

Syria CrisisUS-Russia Relations
printTweet
You might also like
Back to Top
CHINA US Focus 2018 China-United States Exchange Foundation. All rights reserved. Disclaimer