As President Xi Jinping welcomed the 29 global leaders—and President Donald Trump’s representative—at the Beijing Summit of the Belt and Road Initiative (BRI), Sri Lanka is quietly becoming the “Crown Pearl” of China’s multibillion dollar New Silk Road strategy in the Indian Ocean, which connects the Pearl River in Guangdong province of China and the Pearl Square of Bahrain in the Persian Gulf. The two countries will later this year celebrate its $100-million plus, all-encompassing “Colombo Lotus Tower” in the heart of the capital of the island nation of 20 million people, predominantly Buddhists. 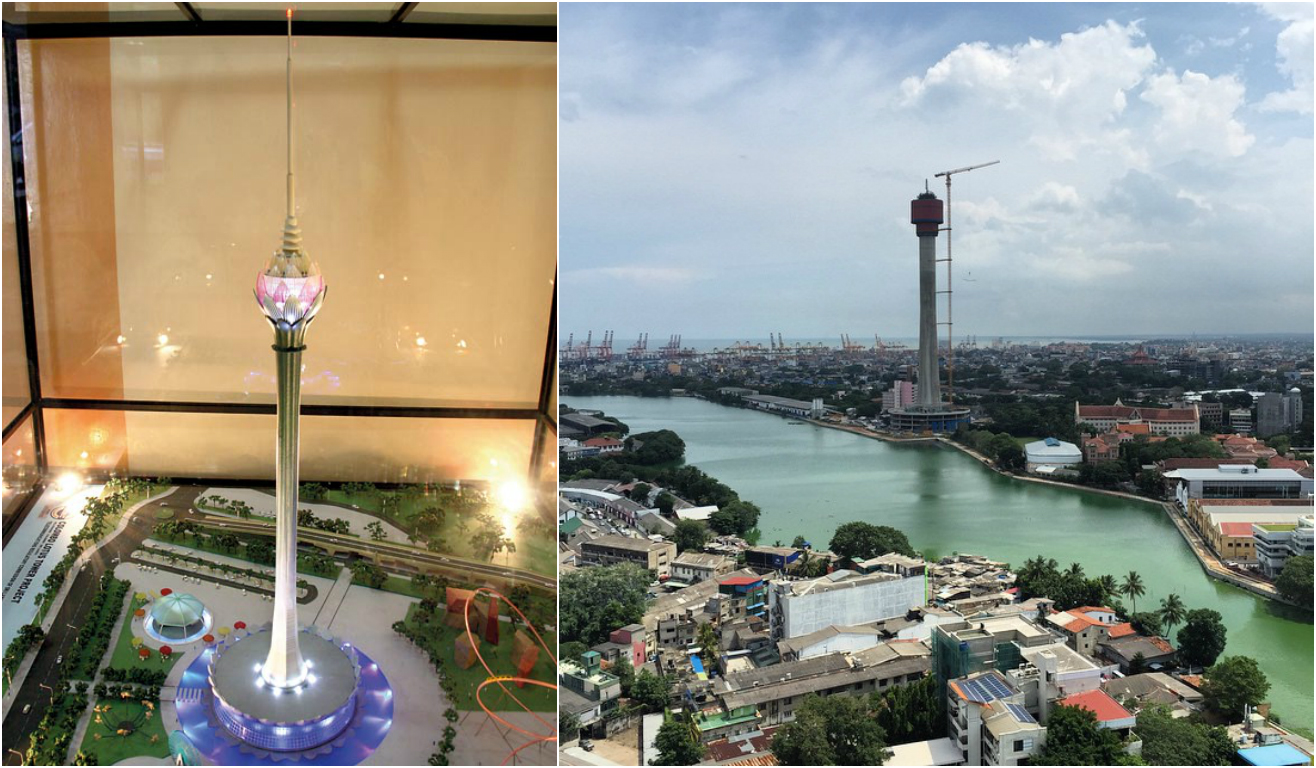 The tower, named in deference to the Buddha’s Lotus Sutra, represents historical ties and reaffirms the Buddhist bonds between China and Sri Lanka. In fact, the highly-sophisticated telecommunication tower is a physical manifestation of China’s foreign policy slogan of a “Peaceful Rise” and it will be the tallest structure in South Asia and the nineteenth tallest building in the world. The 350-meter high Lotus Tower cleverly embodies a Buddhist emblem of peace that harkens back to the ancient power that once radiated from the Middle Kingdom.

As a trading and religious nation for millennia, Sri Lanka has always acted as a magnifying conduit to diffuse Buddha’s noble Dharmic teachings around the world and attracted Buddhist scholars like the famous Chinese Monk Fa-Hsien (399-414), who later adopted the spiritual name Faxian (“Splendor of Dharma”), during the Eastern Jin dynasty. (Another legendary Chinese monk-scholar Xuanzang, 602-664, in the Buddhist Golden Age of the Tang dynasty was inspired by Fa-Hsien’s travel but the Tang envoy was not able to visit Sri Lanka). Over the years, Arab traders introduced Islam; Indian rulers promoted Hinduism; European colonists familiarized Christianity to the indigenous Buddhist people.

Today, Sri Lanka is a multi-religious, multi-ethnic, and multilingual nation. The island—with such diversity within a highly-educated and entrepreneurial population—remains a locus of travel and commerce in the Indian Ocean, modernized now by the multibillion-dollar Chinese investment in the newly-built deep-sea Hambantota Port, the Mattala International Airport, the Colombo Port City, among other development projects. In recent years, an ever-increasing number of Chinese tourists have become frequent and repeat visitors to the sandy beaches and enjoying natural wonders on the island. But more importantly, they are calling upon the places of religious worship and other ancient sites of cultural and historic interest for good reason.

Almost one-hundred years before Christopher Columbus discovered the Americas, the Ming emperor’s Muslim envoy Admiral Zheng He made his maiden visit to Sri Lanka in 1405. In a traditional Confucian manner, the admiral demanded that the Sinhalese king pay tribute and obedience to the Chinese Emperor, the Son of Heaven. The Ming visitor also reportedly wanted to take back the sacred bowl, hair, and tooth relics of the Buddha—the island’s spiritual treasures for millennia.

In fact, the Chinese interest in Sri Lanka goes back to the Great Kublai Khan who believed in Buddhist treasures as magnet for unifying the culturally, religiously, and linguistically diverse Chinese nation. The founder of the Yuan dynasty sent the legendary representative Marco Polo twice in 1284 and 1293 to Sri Lanka with the intent of taking the sacred tooth relics of Buddha back to China. The two-year travelogue of Chinese Monk Fa-Hsien—written in the fifth-century—described the Buddhist treasures in Sri Lanka, and his Chinese translation—of Pali and Sanskrit Buddhist texts—was widely known since the beginning of the Yuan dynasty.

The Ming admiral’s second visit in 1410 led to a conflict between the Ming dynasty and the Kotte kingdom. The war was ostensibly to stop piracy and acquire the tooth relic. With thousands of sailors, the admiral broke through Kotte and captured the Sinhalese king, queen, and other notables. Admiral Zheng took these prisoners to China to apologize to the Ming emperor for their misdeeds, who instead released them in 1411. When the captors returned with the emperor’s nominee to the island’s throne in 1414, the powerful new King—instated in the absence of the captured king—quickly rejected the arriving Chinese emissary. This was historically a very rare incident to what were otherwise peaceful voyages of the Ming admiral to over thirty countries in the Indian Ocean.

Apart from religious and political objectives in Sri Lanka, the Chinese expeditions in general were commercially motivated. An archeological tablet, found at the southern port city of Galle, dated 15 February 1409, has a trilingual inscription—in Chinese, Persian, and Tamil—indicating that the purpose of Admiral Zheng’s visit was to announce the mandate of the Ming emperor to recognize his legitimacy among foreign rulers. According to the inscription on the stele, the Ming diplomat offered valuable gifts like gold, silver, and silk to a local Buddhist temple on Adam’s Peak (Sri Pada, or the “great footprint” of Buddha) mountain. The Tamil script praises the god Vishnu; the Persian text invokes Allah. The inscription has a message to the world invoking “the blessings of the Hindu deities for a peaceful world built on trade.” Above all, commercial and cultural diplomacy was the most vital aspect of all seven of Ming voyages to the region between 1405 and 1433.

Due to colonialism, the historical episodes of Sino-Sri Lanka relations were dormant for almost five hundred years until Sri Lanka gained its independence from the Portuguese, the Dutch, and lastly from the British in 1948. The newly independent island established its first bilateral agreement on Rubber-Rice with China in 1952 soon after the founding of the People’s Republic of China. Since 1957, formal diplomatic relations began to expand, as several heads of state have visited each other’s capitals. The completion of the massive Bandaranaike Memorial International Conference Hall in 1973 was a landmark of friendship, among other projects.

More recently, Sri Lanka established close relations as China provided military, financial, and diplomatic support for Sri Lanka to defeat the separatist Tamil Tigers, ending the over-quarter-century-old Eelam War in 2009. The new Sino-Sri Lankan relationship could be heralded as momentous in their post-war cultural and economic collaboration—which is viewed as mutually beneficial for the two nations.

During his historic visit to Sri Lanka in September 2014, President Xi Jinping described the island as a “splendid pearl” while the two countries signed over twenty bilateral agreements in Colombo. Symbolized by the Buddhist-inspired Lotus Tower on the waterfront of the picturesque Beira Lake in the commercial district, the globalizing BRI is reviving the ancient glory of “trade-for-peace” to bring about a more harmonious and prosperous “Pacific New World Order” for the Asia-Pacific region and beyond.

China-Central Asia RelationsOne Belt One Road
printTweet
You might also like
Back to Top
CHINA US Focus 2018 China-United States Exchange Foundation. All rights reserved. Disclaimer