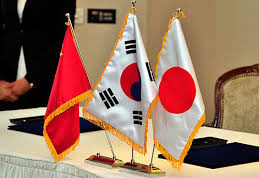 Relations between Tokyo and Seoul have always been somewhat frosty, but recent developments are accentuating the animosity. All of the frictions have their origins in South Korea’s resentment at what Koreans believe is Japan’s arrogant or insensitive behavior. China is well positioned to exploit the growing divisions between its two East Asian neighbors. Conversely, Washington’s hopes for a trilateral front consisting of the United States, Japan, and South Korea to confront North Korea’s disruptive antics and counter China’s rising power in the region are now in jeopardy.

One source of Japanese-South Korean tensions is the feud over two islets, called Takeshima in Japan and Dokdo in South Korea. The quarrel may seem petty, primarily involving control of fishing waters, but given the damage that it is doing to bilateral relations between two prominent U.S. allies, it is a significant controversy. Seoul established formal administrative control over the largely uninhabited rocks in 1954, over Japan’s objections that it had officially incorporated the area in 1905.

The dispute has simmered since Seoul’s 1954 action, but it intensified another notch a decade ago when Tokyo explicitly asserted its claim to the territory in an annual defense white paper. Although Seoul was angered by that move, South Korean officials moved incrementally to reinforce their nation’s claim. That approach culminated in 2012 when then-South Korean President Lee Myung-bak became the first South Korean leader to make an official visit to the islands—an episode that infuriated Tokyo.

Matters have escalated sharply in recent weeks. On February 12, Japanese Foreign Minister Fumio Kishida described the islets as “Japan’s indigenous territory” in a parliamentary address. That stance was more even explicit and uncompromising than the position taken by his predecessors. The South Korean government reacted immediately, declaring that “Dokdo” was indisputably Korean territory “historically, geographically and under international law.”

Raw emotions among the South Korean people are also becoming a factor. The Korea Times reports that an enterprising baker decided to make loaves of bread, which he promptly labeled “Dokdo bread,” in the shape of the two islands. “I was really angry when I heard a Japanese baker made the so-called ‘Takeshima bread’ last year,” he stated. His version, he contends, “has gone viral among online users.”

Robert Dujarric, director of the Institute of Contemporary Asian Studies at Temple University in Japan, warns that Tokyo is foolish to press the territorial issue.  Japan, he argues, “has zero chance of getting any Korean concession on the rocks.” Dujarric adds that the China benefits from the escalating quarrel between Japan and South Korea, contending that “this Takeshima claim only helps China and North Korea and makes life harder for the U.S.”

Outsiders might be tempted to smirk at the importance Japanese and South Korean leaders (and their respective populations) attach to a petty territorial dispute. But that quarrel is symptomatic of much deeper animosity in the bilateral relationship. It is impossible to understand the emotions in South Korea regarding the Dokdo/Takeshima dispute without taking into account the overall troubled history between Japan and Korea. Koreans (both North and South) still fume about the humiliation of Tokyo’s annexation of the Korean Peninsula in 1910 and the often brutal colonial rule that followed. From the standpoint of South Koreans, the Japanese claim to Dokdo is simply another manifestation of that imperial land grab.

Emotions run high over related issues. Japanese governments have stubbornly resisted acknowledging culpability for the issue of World War II “comfort women”—primarily South Koreans who were pressed into sexual service to Japanese military personnel. Likewise, Japanese officials have been slow to offer adequate financial compensation to the surviving victims or their family members.

In the view of South Koreans (as well as Chinese and other populations in East Asia) Tokyo’s stance on that issue reflects a continuing reluctance to accept responsibility for Imperial Japan’s aggression and other war crimes committed during World War II.  Beijing has moved skillfully to take advantage of Seoul’s annoyance at the behavior of Prime Minister Shinzo Abe’s administration. The Chinese and South Korean governments issued simultaneous warnings to Abe not to dilute or “backtrack” on previous statements of Japanese responsibility for the carnage that engulfed East Asia, as the 70th anniversary of Japan’s surrender approaches later this year.

The combination of the various grievances has led South Korean President Park Geun-hye to rebuff Abe’s repeated requests for a summit meeting. Her stance is in marked contrast to the enthusiastic welcome that she extended to Chinese President Xi Xinping when the two leaders held a summit meeting last year in Seoul.

Japanese actions in the past few weeks have not improved prospects for a summit or for an improvement in the overall relationship. Tokyo certainly did not help matters when it scrapped a currency swap agreement that had been in effect since 2001. The Asahi Shimbun concluded that “deterioration of the Japan-South Korean relationship is seen to have affected the decision.” Tokyo’s snub came on the heels of an indiscreet statement from a former top adviser to Prime Minister Abe, who urged her country to adopt a system of racial and ethnic segregation if it became necessary to import high-skill workers from foreign countries. Since at least some of those workers would likely come from South Korea, that sentiment was deeply offensive to Koreans and served to confirm widespread Korean assumptions about continuing Japanese arrogance and racism.

The growing vitriol between its two key East Asian allies has attracted the worried attention of the United States. Obama administration officials continue to press Seoul and Tokyo to resolve their differences on the Dokdo/Takeshima dispute, the comfort women issue, and other grievances. A comprehensive reconciliation between Seoul and Tokyo, U.S. leaders believe, is imperative to facilitate meaningful trilateral cooperation to deal with North Korea’s threatening behavior and China’s looming presence in the region. Given the upward trajectory in South Korean-Japanese tensions, that may prove to be a forlorn hope.