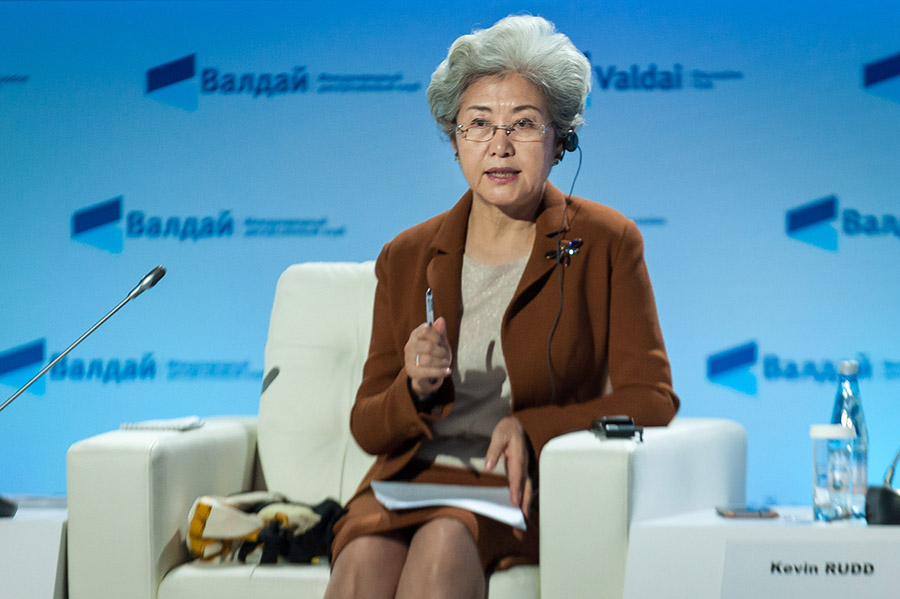 It's an honor to be invited to the Valdai International Discussion Club.

Founded in 2004, the Valdai Club is committedto building new image of Russia, and has nowbecome an important platform for international exchanges.

Today we will talk about “World Order Quo Vadis?”, which is also a topic attracting divert opinions. There is obviously no consensus yet on how should we adjust the existing orders. More importantly, there is lack of trust among major countries.

In the history of international relations, trust has been a rare commodity. Though the mankind has progressed a lot, lack of trust remains an impediment to genuine partnership in today's world.Take Russia and the US for example, 25years after the end of cold war, it is hard to tell how much more they trust each othernow.

The relationship between China and the US is also often troubled by the lack of trust. In its 30 years of the reform and opening drive, China has grown strong economic ties with the US. However,the recent unpleasant encounter in the South China Sea putourconflicting security interests into the spotlight,reminding many in China that in spite our inseparable interdependence, we are far from partners in the security field.

Chinese people need to reexamine the US' world order which it wants to lead for the next hundred years and try to understand what it means for China?

Am I right to say that “the world order” the US claims to lead is a power structure,sitting on American values, rejecting other ideologies andsupported by a military alignment, which does not take into consideration the security interests of others.

In the economic field, the border is not that distinct.While it enthrones the US dollar-centered global economic framework, it also encouraged globalization which led to the opening up of the world economic structure. The UN institutions, G20 and many other organizations are encouraged to play growing role in global governance.

China does not have a “strategy” to challenge the US-led “world order”, but when it ostracizes the Chinese political system and security interests, it's hard for China to think of supporting it.

Then, will the US adjust? I discussed this with many US scholars and the answer is No. I remember when seeking advice from Professor Mearsheimer, he also told me that “China should either submit or challenge” and that it's only natural that China would seek to replace the US and the US should counter it.

Obviously the Chinese nation is not going to submit nor would the other emerging countries, such as Russia and India. So is this really an “either-or” choice? Does it mean that in the developing countries when people are out of poverty and can start pursuing their dream of prosperity, then their country would have to move into power wrestling and fall into the “Thucydides Trap”?

You may notice the term we use is “international order”. China is among its founder,is a beneficiary, as well as its active supporter and reformer.This order structure overlaps, to some extent, with the above said US-led “world order”, though each does not include the other in its entirety.

Today's world has long shifted its agenda frombloc politicsto development and cooperation. Globalization has allowedfreer flow of goods, capital, technology and resources, enabling countries likeChina to achieve unprecedented growth thanks to the right leadership of the Communist Party and tremendous endeavor of its population.

China should find it comfortable to stay within this framework international order as it has allowed China to achieve its purposes. But we also think there is the need of reform.

We have to admit that the world landscape has been transformed and whatever we have today as order and rules are falling short of providing all solutions, if not creating more problems.

The challenges we face today are diverse and complicated. i.e., interventions from major countries had caused more disorder than order, sometimes even spilled over. The world has witnessed upheavals in one country and anothercreating power vacuums where terrorism thrives, and people left in destitution. The lesson is profound.

Globalization has also revealed its downside, such as uneven development and distribution of wealth, and the lack of sufficient oversight on the capital flow. Regional integration islosing momentum.The existing international order need to improve to better suit the time and to upgrade global governance, but changes should be incremental.

Chinese President Xi Jinping talked on some occasions about the concept of building “a community of shared interest” and the need for “a new model of global partnership”. China advanced the “Belt and Road Initiative”, which is aimed at nurturing new growth and promote prosperity and security though wider cooperation. The Eurasian Economic Union Russia proposed is in the same direction and the two would reinforce each other. The US, in spite of its apprehension, should also find opportunities in these initiatives if it one day joins in.

To conclude, the key to a common order, if there can be one, is to have an inclusive framework that provides a common roof for every country and cover every concern. This may sound idealistic and can't be possible without trust. But since we are already meeting new challenges together, there is every reason for us to foster the habit of coordination and build trust along the way.

Many ask what kind of a role China wants to play in the world as it's ascending to the world stage. I see there are a number of elements that China holds high in its foreign policy thinking.

First, mutual respect, especially in the political arena, which China takes as the foundation of trust. No country should try to impose its own value on others.We believe all countries should be respected inexploring their own path suitable to themselves.

Second, we believe in common security, meaningone country's security should not be at the expense of others. The 21st century should not witness another round of geopolitical rivalry and new bloc politics.
Third, in the economic field China supports“inclusive development” which was also highlighted at the G20 Hangzhou Summit, to“allow economic growth to serve the needs of everyone”.

While the world expects China to take more responsibilities it also wants to understand China's intentions. It is important that China explains to the world more effectively in order to win more trust. China also needs to learn from other countries and to be open to new ideas while developing its own thinking for the world.