The surprisingly smooth selection of Portugal's Antonio Guterres as the next UN Secretary General will not overcome the sharp differences seen in the recent debates at the United Nations General Assembly (UNGA) between the United States and China. Like other countries, the United States and China used the opening fall session of the UNGA, attended by world leaders, as a platform to express positions and principles before a global audience. 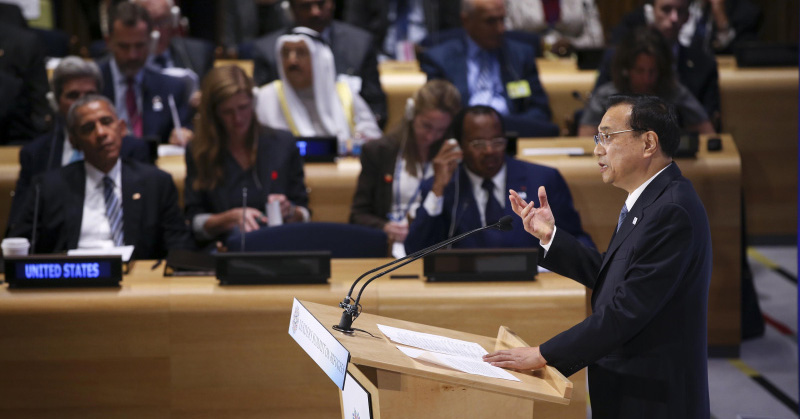 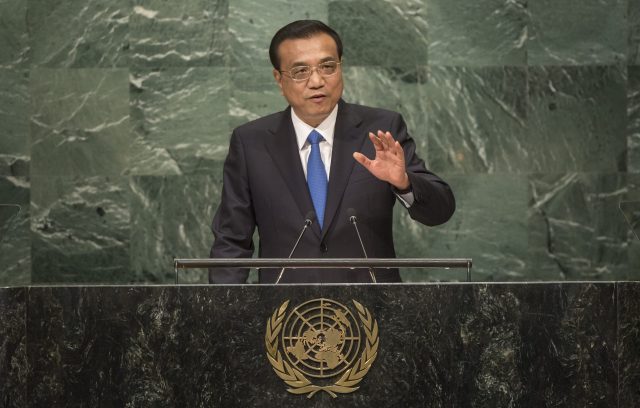 Li Keqiang, Premier of the State Council of the People’s Republic of China, addresses the 71st session of the U.N. General Assembly. September 21, 2016. UN Photo/Cia Pak

Beijing’s early involvement in the United Nations was limited. Although China is technically one of the charter members of the United Nations, the People’s Republic of China (PRC) only replaced Taiwan as the holder of China’s seat in the United Nations after 1971. However, Beijing’s activism in the UN grew throughout the 1970s and 1980s. Today, Chinese policy towards the United Nations is notable in its defense of the principles of national sovereignty and non-interference in countries’ internal affairs. This approach applies the Five Principles of Peaceful Coexistence enunciated by Zhou Enlai in 1954 to the UN body: mutual respect for sovereignty and territorial integrity, mutual non-aggression, non-interference in the internal affairs of other nations, equality and mutual benefit, and peaceful coexistence in developing diplomatic relations with other countries.

In line with that philosophy, at the General Debate of the 71st Session of the UN General Assembly last month, Chinese Prime Minister Li Keqiang highlighted the crucial role that China is playing in shaping the U.N. Post-2015 Development Agenda. In his speech to the body, he presented China as a responsible power, seeking “win-win” solutions throughout the globe. Li also highlighted China’s commitment to addressing climate change as another example of Beijing’s leading role in dealing with major global challenges within the UN framework.

Yet, it is not hard to read much of what Li said as a critique of U.S. policy. For example, he called on the international community to accept the leading role of the UN Security Council, where Beijing can veto U.S. actions, in world politics. Furthermore, Li promoted dialogue and mediation rather than coercive means for solving international disputes (diplomats rather than marines). He further called for an end to “double standards” in dealing with terrorists (implying that Washington must treat anti-Beijing Uighurs as militants rather than martyrs) and for more multinational partnerships rather than exclusive alliances (which the United States, unlike China, has in abundance). Finally, Li defended Beijing’s approach to territorial disputes: “China has worked through dialogue, negotiation and friendly consultation to address differences and questions with other countries, including disputes concerning territory and maritime rights and interests.”

Li may have been motivated by the speech U.S. President Barack Obama gave the previous day at the General Assembly session. Obama attacked China’s backward thinking and policies. Referring to the territorial dispute between China and other Southeast Asian states, Obama observed that, “In the South China Sea, a peaceful resolution of disputes offered by law will mean far greater stability than the militarization of a few rocks and reefs.” In addition, Obama offered a stirring defense of U.S. liberal democratic principles, which was also an implicit attack on China’s political systems: “as imperfect as they are, the principles of open markets and accountable governance, of democracy and human rights and international law that we have forged remain the firmest foundation for human progress in this century.” He acknowledged that history, geography, and popular beliefs will affect national development, but insisted “that does not mean that ordinary people in Asia, or Africa, or the Middle East somehow prefer arbitrary rule.”

The challenge facing the next Secretary-General, and the next U.S. president, was evident in how Russian Foreign Minister Sergey Lavrov, in his own speech at the General Assembly, approvingly cited some Sino-Russian initiatives that the United States opposes. For example, Lavrov renewed support for the Russian-Chinese draft treaty on the Non-Deployment of Weapons in Space, which Moscow and Beijing are supporting in the Conference on Disarmament. The treaty alarms U.S. policy makers who see it as aiming to impede U.S. ballistic missile defenses, which require space-based sensors. Lavrov also mentioned the joint Russian-Chinese proposal to strengthen the Convention on the Prohibition of the Development, Production and Stockpiling of Bacteriological (Biological) and Toxin Weapons, which the U.S. government has worried might relax protections of the intellectual property of U.S. biotechnology companies.

Likewise, Lavrov cited the Russia-China proposal for a more inclusive Asian-Pacific regional security order that would favor Beijing’s and Moscow’s combined Eurasian integration efforts. Furthermore, Lavrov called for making the Group of Twenty (G20), currently under Chinese Presidency, the world’s “leading global economic and financial forum.” Though the Obama administration has similarly favored elevating the G20’s role in the world, the United States also wants to keep a powerful G7/G8, which China has never joined, and from which Russia, since its annexation of the Crimea Peninsula, has been excluded.

Finally, Lavrov also favorably recalled the June 25, 2016 China-Russia Joint Declaration on the Promotion and Principles of International Law, which calls for upholding “the principles of sovereign equality of states and non-interference in the internal affairs of others.” These principles, also defended in Li’s speech, reinforce the longstanding Sino-Russian call for more democracy between states rather than within them, and for allowing each country (in practice government) to determine what kind of political and economic system it will pursue.

The ability of China, the United States, and other Security Council members to agree on a consensus candidate for the next UN Secretary General reassures us that the members can pragmatically cooperate despite their differences. The next UN Secretary General, however, will still have to manage their broad and deep divergences on key points that were evident in their recent General Assembly speeches.