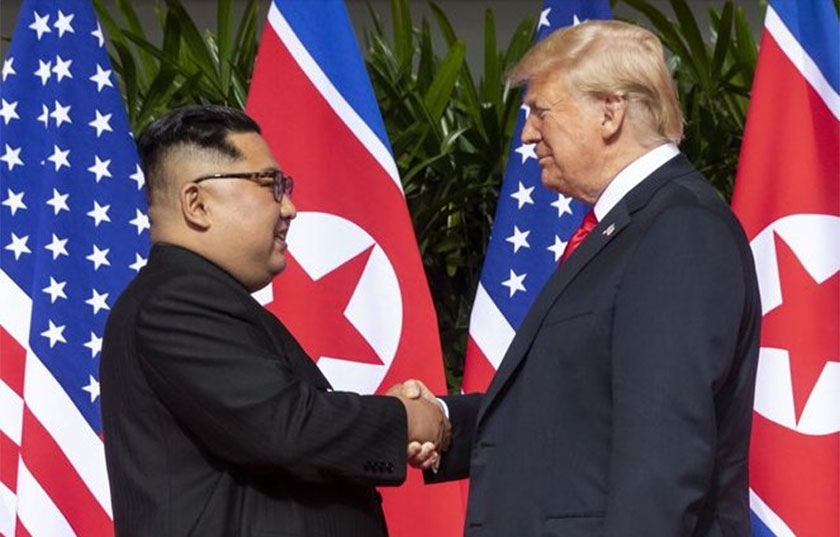 U.S. President Donald Trump’s North Korea policy could be boiled down to two features: “maximum pressure” applied mainly in 2017 and diplomatic engagement for denuclearization in 2018. The seemingly contradictory features are actually an organic whole, with the first being the tool and the second the goal. This is what typical “coercive diplomacy” means - coercing the targeted country to stop or start some sort of activities by resorting to the threat of force or the limited use of force.

The United States, buoyed by its status as the only superpower, had a record of coercive diplomacy against other countries after World War II. According to studies by American scholars, including Peter Viggo Jakobsen, successful coercive diplomacy should be supported by the following four conditions: a threat of force or limited use of force to defeat the opponent’s objectives; a deadline for compliance; an assurance to the adversary that compliance will not lead to more demands; and an offer of carrots for compliance. So, credible threat of force and credible assurance of incentives hold the key to success of coercive diplomacy.

With regard to the first two conditions, Trump did well, and this was an important reason for the turn in the North Korean nuclear issue. Some claimed that sanctions and pressure against North Korea had been in place for several decades but had failed in forcing North Korea to abandon its nuclear program, therefore, it would also be impossible to coerce North Korea to give up its nuclear program through applying maximum pressure. This view, however, failed to acknowledge the fundamental differences between “maximum pressure” and the pressure applied on North Korea in the past.

First, in terms of economic sanctions, the Trump administration pushed for comprehensive sanctions which included multilateral sanctions imposed by the United Nations and “secondary sanctions” imposed by the United States, and this was starkly different from the targeted sanctions by the previous administrations. Under the approach of targeted sanctions, North Korean departments, companies and individuals directly involved in its program of weapons of mass destruction were targeted. This was supposed to be helpful in preventing harm to the general public and a humanitarian crisis. Under North Korea’s special institutional system, however, it was always the general public who suffered from such sanctions. That explained why North Korea still managed to maintain stable or even growth in trade and the economy when the country was under targeted sanctions. When comprehensive sanctions were applied against North Korea, it meant an overall economic and financial blockade, and a cutoff of economic exchanges with the outside world. This is why comprehensive sanctions in the past half year have produced results not seen in the past 20 years. After comprehensive sanctions were imposed, North Korea’s trade deficit reached the highest level in more than two decades, with nearly 90% of its exports being blocked, and its imports of strategic goods like oil being substantially reduced, and in 2017, its economic growth was a negative 3.5% (the lowest level in 20 years).

Second, the threat of imminent military strike against North Korea was maintained convincingly, with military preparations being made. According to studies, a credible military strike against the country was key to the success of coercive diplomacy. Apart from the Clinton administration which, in 1994, displayed its readiness to solve the North Korean nuclear issue through military means, which consequently threw North Korea into something of a panic, the ensuing administrations simply resorted to a defensive posture that included increases in scale and frequency of military drills and an increase in its military presence on the Korean Peninsula to cope with the North Korean nuclear threat. Such a defensive posture failed to deter North Korea and gave it the impression that the United States could tolerate North Korea possessing nuclear weapons. Trump chose to play hardball by recklessly hyping up military options against North Korea, including making plans for military strikes, extremely harsh rhetoric from senior advisers, and intentionally raising tensions on the peninsula. Trump, in his Twitter post, even threatened to punish North Korea with "fire and fury like the world has never seen”. No rational government could turn a deaf ear to threats from the most powerful military. With military options remaining uncertain, it seemed that Trump was insane, but actually, he was shrewd enough to make North Korea fear an imminent military strike.

Third, the United States tried to diplomatically isolate North Korea. It prevented it from taking advantage of disputes between nations, and worked to impose maximum pressure. Since 2017, pressured by the United States, countries like Portugal and Jordan broke off diplomatic relations with North Korea, nations like Mexico, Peru, Kuwait, Spain, and Italy expelled North Korean ambassadors, and countries like Thailand and the Philippines significantly reduced economic activities with Pyongyang. Trump also threatened China and Russia with trade war and sanctions, trying to force them to maintain or even escalate pressure on North Korea.

Therefore, the major development on the North Korean nuclear issue this year can mainly be attributed to coercive diplomacy applied by the Trump administration. U.S. allies like Japan and South Korea also attributed Pyongyang’s change in its nuclear stance to Trump’s maximum pressure strategy. However, the denuclearization talks seem to have met some hurdles and are making very slow progress, and it’s believed this is closely associated with Trump’s overemphasis on the first two conditions of coercive diplomacy (credible threat) and his neglect of the latter two (credible incentives). As explained by Stanford Professor Alexander George, who coined the coercive diplomacy concept, coercive diplomacy should include “sticks” (coercion) and “carrots” (diplomacy), and highly delicate and skilled maneuvering is needed for success.

For decision-makers, it’s crucial to know that any policy has limits, and it is crucial to maintain a balance among different policy tools. If the Trump administration overstresses maximum pressure and fails to offer sufficient incentives to North Korea (such as credible long-term security guarantees and mechanisms after abandoning its nuclear program as well as economic compensation), then why should Pyongyang take the huge security risk of abandoning its nuclear pursuit? For any rational regime, if the threat to its safety and security is not eliminated, it would naturally choose the risk of resisting rather than the risk of kneeling down in the face of unbearable pressure. After all, resistance offers a glimpse of hope for survival.

Therefore, while North Korea needs to have the courage and resolution to abandon its nuclear program, the United States must also show its courage and determination to make a bold deal with North Korea. After North Korea abandons its nuclear program, the United States must have practical, specific, and detailed plans on such issues as removal of sanctions, security guarantees, and economic compensation. Otherwise, Trump’s coercive diplomacy will fail.

North Korea
printTweet
You might also like
Back to Top
CHINA US Focus 2021 China-United States Exchange Foundation. All rights reserved.