With both major political parties having selected their candidates, the U.S. presidential campaign is in full swing. Over the next few months, Hillary Clinton and Donald Trump will outline platforms on foreign policy, economic revitalization, national security, and immigration. And if prior presidential campaigns are a sign of what is to come, the nominees will say much about China, U.S.-China relations, and international affairs more generally. 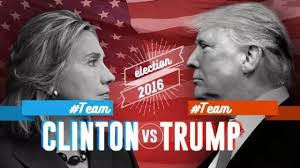 Presidential nominees have jousted over China for decades. In 1980, candidate Ronald Reagan criticized President Jimmy Carter for formally recognizing China, and promised to renew “official relations” with Taiwan. (Reagan later disavowed this position.) In 1992, candidate Bill Clinton criticized President George H.W. Bush for “coddling” the “butchers of Beijing.” As President, Clinton pushed China on human rights, but his efforts are generally thought to have had little impact. In 2012, candidate Mitt Romney pledged to label China a “currency manipulator” on his first day as president.

In the present election cycle, Donald Trump has far exceeded his Democratic rival in at least one measure: attacks on China. While announcing his candidacy last June, Trump asked, “When was the last time anybody saw us beating, let’s say, China in a trade deal?  They kill us. I beat China all the time. All the time.” In fact, most experts agree that China’s accession to the WTO — which the Clinton team negotiated — was more difficult than that of any other country. Not that the Clinton administration would say they “beat” China. Earlier this year, Trump proposed a 45% tariff on imports from China to compensate for the devalued currency. Such a move would not only violate international trade law (something the United States is eager for China to comply with), it may also spark a trade war (something the United States is eager to avoid).  In July 2016, apropos of the U.S.-China trade imbalance, Trump told a crowd in Indiana, “We can’t continue to allow China to rape our country, and that’s what they’re doing.”

As the ancient Chinese sage Confucius once said, “The gentleman is slow to speak, but quick to act.” As the 19th-century American sage, and first Republican President, Abraham Lincoln put it, “Actions speak louder than words.”  Rather than focusing on the nominees’ rhetoric, we would do better to examine their actions vis-à-vis China and the international economy during their respective careers. In spite of stark contrasts on various matters, Clinton and Trump share basic commonalities. Whatever they may say on the campaign trail — and their comments will surely grow more colorful in the run-up to November — both candidates have supported, and benefited from, free trade and globalization.

The 1980 construction of Trump Tower offers an early snapshot of Trump’s position on globalization. Located firmly in Manhattan, the tower’s construction was not isolated from the international economy. Trump selected the lowest bid to demolish a department store that once occupied the plot where Trump Tower now rises. Most of the 150 workers who showed up were Polish immigrants without proper documentation. According to one source, Trump fired them after learning they were working illegally, depriving many of the workers of their earned wages. Trump later denied knowing about the undocumented laborers. Even if we take him at his word, people at his development company, known as Trump Equitable, did not attach importance to hiring American workers, or treating these workers fairly. The incident says much about Trump’s “America First” slogan. It should not lend Trump credence with the working class, but it does, however, say a lot about his attitudes towards globalization, immigrants, and the economically vulnerable.

Beyond American borders, Trump has extensive holdings in India, Panama, the Philippines, Turkey, and Uruguay. These luxury projects employ thousands of foreign workers, divert millions of dollars of investment from the United States, and contribute to our longstanding trade deficit. For those interested in buying multimillion-dollar apartments, brochures are available in English and Chinese. The Chinese version uses simplified characters of Mainland China, not traditional characters used in Taiwan and Hong Kong.  If China is indeed “raping” us, they should do so in a Trump property.

Trump has also taken advantage of globalization in fields outside of real estate. The Donald J. Trump Collection purveys neckties made in China, shirts made in Bangladesh and Honduras, and suits made in Indonesia. These countries—Honduras and Bangladesh in particular—have some of the lowest wages, and least effective labor protections, in the world. Like many multinational enterprises, the Trump Collection aims to produce clothing as cheaply as possible, without much concern for where it is produced, by whom, or under what conditions. I suspect Trump licensed these products, as opposed to building a factory to produce these goods. If so, he contracted out the manufacture of the clothes, affixed the Trump label, and then exported them to the United States. Trump did not “offshore” production because he never had manufacturing capacities in the United States in the first place. Nevertheless, the Trump Collection contributes to the U.S. trade deficit, denies manufacturing jobs to American workers, and erodes the real wages of working Americans, who compete against Chinese, Bengalis, and Hondurans.

What about Hillary Clinton? As a candidate in 2016, she has said little about China. She has, however, opposed the Trans-Pacific Partnership (TPP), an Asian-Pacific trade pact. During the Democratic National Convention, Terry McAuliffe — the Virginia governor and longtime Clinton confidante — predicted Clinton’s opposition to TPP would melt upon entering the White House. McAuliffe’s observation created a minor stir for the Clinton campaign, which now had to double down on its opposition to the TPP. But if we take history as our guide, Hillary Clinton is far more of a free trader than her opposition to the TPP suggests. More pointedly, she is a globalist while in office, and a nationalist while seeking office.

As First Lady, she championed the achievements of the North American Free Trade Agreement (NAFTA), only to call it “flawed” when running to be the Senator of New Yorkers. Once elected, Senator Clinton voted to ratify free-trade deals with Singapore, Chile, Australia, and Morocco. But when she ran for president in 2008, she criticized trade deals with Korea and Colombia, only to seek their ratification as Secretary of State. Even in her own memoir, Hard Choices, Clinton went from endorsing TPP in the 2014 hard-cover version, to omitting mention of the TPP altogether in the 2015 paper-back version. Despite so many hard choices, Clinton is a fairly strong adherent to the basic tenets of globalization.

On China, Clinton has voiced serious concerns about the country’s human-rights abuses, particularly those targeting women. Still, it would be difficult to imagine a major reversal on China policy because of its human-rights violations. President Bill Clinton adopted a very hard stance on Chinese human rights violations during his first term, only to soften it by the end of that term. Eventually, he signed permanent normal trade relations with China, ending the annual ritual of reviewing China’s human-rights record, and then approving trading relations. It is unlikely that China, far more powerful now than 20 years ago, will tolerate serious criticism of its human-rights record.

During the Republican National Convention, a group of Chinese diplomats — among them the impressive Ambassador Zhang Qiyue — visited my university, Case Western Reserve.  After exchanging the requisite pleasantries, a Chinese consul asked about the upcoming elections. I responded, “Unfortunately, people say stupid things about China during the presidential campaign. But if the past 40 years have taught us anything, it is how quickly their views evolve once they enter the White House.”

Whoever wins in November, the next administration will likely enact a China policy stressing economic engagement, person-to-person interaction, and cooperation on a wide range of global challenges. In so doing, the administration will continue along a trajectory set by the previous seven administrations. The United States and China will continue to disagree fundamentally about a number of issues, from the South China Seas and cyber-security to human rights and religious freedoms. The U.S. president will, in all likelihood, accept the idea that cooperation ultimately triumphs over contestation.