The just-concluded G7 summit passed a leaders’ declaration that condemns Chinese and Russian attempts to “change status quo” with force. It claims that G7 nations “are concerned by tensions in the East and South China Seas”, “strongly oppose the use of intimidation, coercion or force, as well as any unilateral actions that seek to change the status quo, such as large-scale land reclamation”; and it reiterates condemnation of illicit annexation of Crimea. The declaration can be read as the United States’ latest stance regarding China and Russia, which has attracted global interest: Will the U.S. take on two world powers, China and Russia in this case, simultaneously with two fists? Where will the new China-U.S.-Russia triangle be headed? 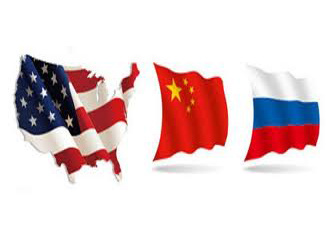 Before discussing these two questions, we have three others to answer: Has the U.S. declined? Has Russia recovered? Has China risen?

My answers to the three are neither definite “yes” or “no”. U.S. power has not declined. Only that it no longer appears that outstanding with the normal changes in relative strengths of countries in a time of peace. Russia might has seen recovery, more or less. But it is far from being comparable with the days of tsarist Russia or the former Soviet Union. Its economy grew by a meager 0.3 percent last year, and its conditions are pretty difficult under harsh sanctions by the U.S. and Europe. China is indeed on its way to rejuvenation. But it has a very long way to go before achieving modernity. Its “no. 2″ status is more hypothetical than realistic.

There is no denying that the China-U.S.-Russia triangle is an important factor affecting the strategic pattern of the contemporary world, as well as a key variable in future world order. The present China-U.S.-Russia triangle is obviously different from the China-U.S.-Soviet Union one of the 1970s. Against the Cold-War backdrop of East-West confrontation, the former triangle featured a clear structure and two opposite sides. With two parties joining hands against the third, it was a standard pattern of zero-sum gaming. With the Cold War gone and the Cool War dawning, against the background of economic globalization and political multi-polarization, the China-U.S.-Russia triangle appears more complex. Beyond contradictions and conflicts, the parties also share broad common interests, so cooperation between any two parties will not automatically be at the price of undermining the third. Though U.S.-Russia ties have nosedived to a post-Cold War nadir in the wake of the Ukraine crisis, President Obama said, “This is not another Cold War… After all, unlike the Soviet Union, Russia leads no block of nations, no global ideology. Nor does the United States, or NATO, seek any conflict with Russia.” The U.S. is rebalancing to the Asia-Pacific, and enhancing containment of China. But by and large it remains focused on prevention, and is aimed at creating a favorable “strategic environment” for the U.S. Generally speaking, there has been more cooperation and transparency and less confrontation among the parties.

Now let’s return to the first two questions. Will the U.S. simultaneously take on China and Russia? In fact, in geopolitical terms, each of the three has considerable strategic depth, so much so that even if the stronger two team up against the third, there is no chance of a complete triumph, much less if any one party takes on the other two at the same time. From fanning the flames to rushing to the very forefront in the South China Sea, to ganging up with European countries in condemning and sanctioning Russia, what has it achieved? The parties eventually will have to cool tensions and work together.

Then what would be the future course of the three-nation drama? For the time being, development of the three pairs of bilateral ties in the China-U.S.-Russia triangle is unbalanced. In short, China and Russia are busy cooperating, China and the U.S. are busy coordinating and managing their volatile ties, the U.S. and Russia are busy with sanctions and counter-sanctions. In politics and national security, China-Russia ties have far outgrown China-U.S. ones; in economic and social concerns, China-U.S. relations have far outshone China-Russia ones. Given that any one country in the three is more or less in a certain partnership in some areas with the other two, “issue-specific partnership, instead of alliance” may become an outstanding feature of the China-U.S.-Russia triangle in the future. These days, the resolution of global problems and coordination of global governance are very important. But that is precisely what is lacking in the present triangle. The U.S. will remain no.1 in international affairs for a very long time. It is advisable that the U.S. be a little more democratic and respectful in dealing with the other two. This is essential for avoiding the past tragedies of major-country rivalries and blazing a new trail for major-country relations featuring mutual respect and win-win cooperation. Let the China-U.S.-Russia triangle contribute more positive energy to the international community.