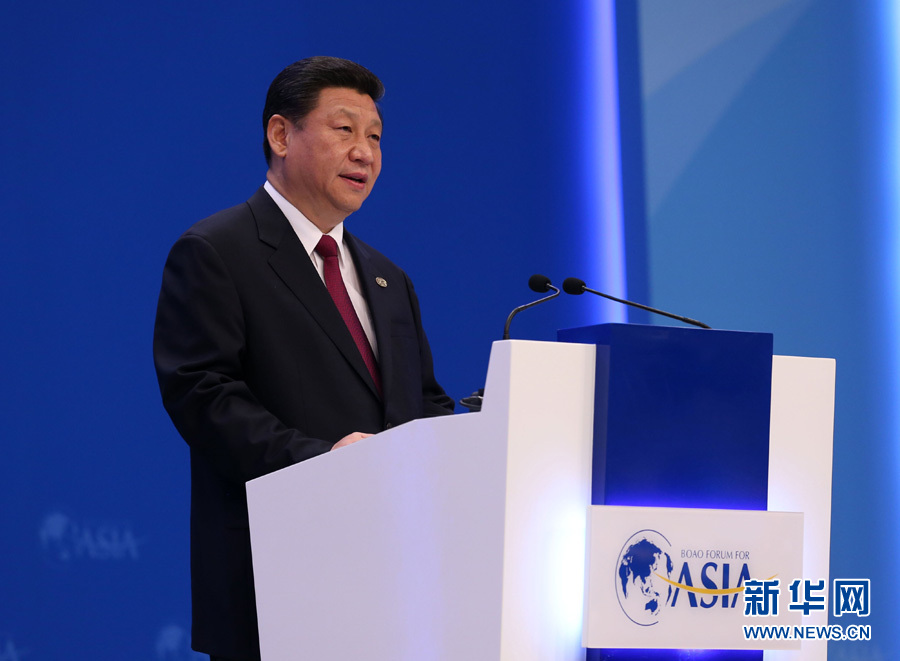 On 10 April 2018, President Xi Jinping made a keynote speech at the opening of the annual Boao Forum for Asia. In this speech, entitled “Openness for Greater Prosperity, Innovation for Better Future”, he answered two fundamental questions, namely, Where are we headed? and What is the future of Asia? In so doing, he expanded on the notion of building a “community of shared future for mankind”, pointed out the direction for the chaotic world we live in and displayed a bold commitment to globalization as the leader of China.

Focus on the overwhelming trends in the world

Facing a complex and changing world, President Xi stressed the need to keep a firm grasp of the law of history and the overwhelming trends of the world so as not to let our vision be blocked by “floating clouds”. What are these trends?

The first trend is peace and cooperation. In a world aspiring for peace and development, the cold-war and zero-sum mentality looks increasingly out of place and putting oneself on a pedestal will go nowhere. This observation amounts to a veiled criticism of the egocentric President Trump.

The second trend is openness and connectivity. Openness leads to progress while seclusion leaves one behind. Our world has long since become a global village where interests of all countries intertwine and interconnect. Such close linkages in social and economic development has made connectivity and integration the inevitable choice if countries aspire for greater prosperity and faster development. This observation aims at populism, protectionism, anti-immigration, and other de-globalization practices in the developed countries of the West, especially the US government which is engaged in building a wall around itself.

The third trend is reform and innovation. This is the fundamental driver for human progress. Whoever refuses to reform and innovate will fall behind and be consigned to the dustbin of history. This year coincides with the 40th anniversary of our reform and opening up agenda, whose proud record testifies to China’s consistent adherence to self-revolution and home-driven innovation.

A community of shared future to lead the world

President Xi called for concerted efforts to build a community of shared future for mankind and a peaceful, tranquil, prosperous, open and beautiful Asia. Five key areas are identified.

Politically, countries need to respect each other and treat each other as equals. They should respect the social system and development path independently chosen by each country, respect each other’s core interests and major concerns, follow a new approach to state-to-state relations featuring dialogue rather than confrontation and partnership rather than alliance, and refrain from seeking dominance or playing a zero-sum game. They should do away with the beggaring-thy-neighbor practices, reject power politics or hegemony with the strong bullying the weak, and properly manage their differences and disputes, thus working together to bring about an enduring peace in the world.

With respect to security, countries should go for dialogue and shared responsibility. Acting on the vision of common, comprehensive, cooperative and sustainable security, they should endeavor to maintain the international order and international systems underpinned by the purposes and principles of the UN Charter, adopt an integrated approach to meeting traditional and non-traditional security challenges and promote coordination, complementarity and inclusion among various security mechanisms.

Economically, countries need to cooperate closely for win-win results. They should work towards an open global economy, reinforce their cooperation within the multilateral framework, promote trade and investment liberalization and facilitation, uphold the multilateral trading system and make economic globalization more open, inclusive, balanced and beneficial to all.

Culturally, countries should uphold inclusion while seeking harmony without uniformity. They need to promote mutual learning among civilizations and turn it into bridges of friendship across peoples and safeguards of peace for the region and beyond.

With respect to the environment, countries must treat nature with respect and treasure our planet. They should step up cooperation on climate change, environment protection, energy conservation and emission reduction, and secure continued progress along the path of sustainable development featuring increased production, higher living standards and healthy ecosystems so that future generations can enjoy blue skies, clear water, and lush mountains.

A community of shared future for mankind

The first type of challenges comes from obsolete mentalities, or what people call “inertia of history”. On the one hand, the “community of shared future”, currently still in its infancy, will take a long time to grow and come of age. On the other hand, as problems, standoffs and confrontations still abound, political blocs and military alliances that either are exclusive or target third parties remain attractive options. Conflicts and discrimination among civilizations are widespread, and zero-sum games, power politics, and hegemonic behaviors reminiscent of the Cold War die hard. In particular, the Trump administration, with its selfishness, arrogance, and loud championing of “America First”, is doing everything possible to shirk its international responsibility.

Another type of challenges comes from the specific areas of building the community of shared future. In the economic arena, the protectionist US not only threatens China with trade war but is poised to subvert the multilateral trade and economic systems all together. In the political arena, Western powers are bent on dividing the world along ideological frontiers, calling countries of differing systems “authoritarian” and subjecting them to smear campaigns. In the security arena, the US continues to seek military supremacy to keep emerging countries vulnerable and, at the same time, international terrorism remains rampant. In the cultural arena, inter-civilization conflicts and racially-based bias and discrimination are still widespread. In the environment arena, collective actions aimed at mitigating climate change move forward haltingly, with the US under the Trump administration blatantly pulling out of the Paris Agreement.

Confronted with such a complex and challenging reality, China’s proposition to build a community of shared future for mankind, though popular and well-received in the world, can only be an uphill battle and pursued in a patient and step-by-step manner.

A Community of Shared Destiny for Mankind with Win-Win Cooperation at Its Core
printTweet
You might also like
Back to Top
CHINA US Focus 2018 China-United States Exchange Foundation. All rights reserved. Disclaimer