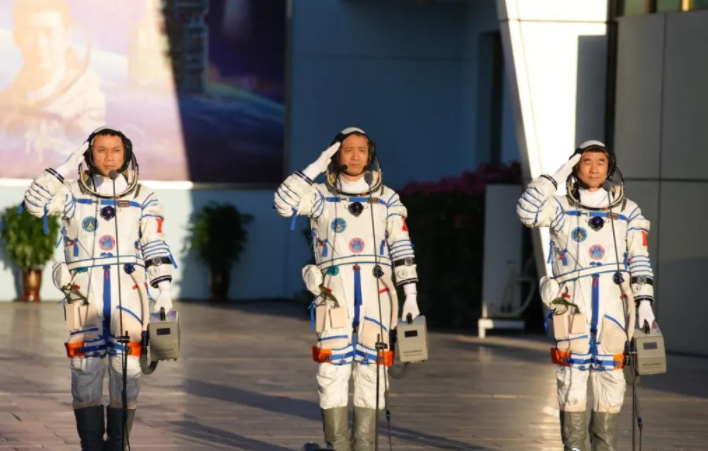 The taikonauts arrived safely and are now inside in the core crew module known as Tianhe where they will spend the next three months checking systems and preparing for expansion of the Tiangong space platform which is to be buttressed with modular labs and support infrastructure with the advent of further manned crews.

When the U.S. Congress passed the prejudicial Wolf Amendment in 2011 which basically said “Chinese not welcome” to join NASA related programs, Chinese scientists rolled up their sleeves and went to work, resulting in the Tiangong Space Station.

Given the current tit-for-tat tenor of U.S.-China relations, this is a rather high-minded response. If the energy were to be reciprocated, the U.S. should rescind the April 2011 Wolf Amendment which states:

None of the funds made available by this division may be used for the National Aeronautics and Space Administration or the Office of Science and Technology Policy to develop, design, plan, promulgate, implement, or execute a bilateral policy, program, order, or contract of any kind to participate, collaborate, or coordinate bilaterally in any way with China…

If the U.S. and Russia can cooperate in space, why not China?

Ironically enough, during the same period that NASA was prohibited from cooperation with China, U.S. crews had to rely on Russia, a sometimes-intimidating political rival. For the better part of last decade, powerful Russian launch rockets and Russia’s fabled Soyuz capsule were essential for ferrying men and materiel to and from the ISS, responsible for all pickups and delivery of its human inhabitants.

The International Space Station is international, but only to a point. It has included 153 astronauts from the U.S., 50 from Russia and 10 from Japan and 8 from Canada. Italy, Germany and France have sent a total of 12 space passengers to the station. Tim Peake, who has done much to popularize the view from space, is the only participant from the UK to date. South Korea and Malaysia have also sent one each.

China is notably absent. Now China has its own space station up and flying, with eleven more visits planned in the near future. Additional living space and modular lab wings will be added, attached to the long, cylindrical craft with the help of a large robotic arm.

China is admittedly late to the game, but advances in television broadcast and digital communications means it can reach a larger audience in real time with vivid, almost cinematic detail.

Images of the formidable Long March 2 rocket carrying Nie Haisheng, Liu Boming and Tang Hongbo into space, alternating views inside the Shenzhou capsule and outside the craft provided compelling footage guaranteed to impress a new generation of youth with the high drama of space travel.

Romance of space travel aside, it can’t be overemphasized enough that space exploration is dangerous, costly, technically difficult and politically fraught, as both the U.S. and Russia have learned during various lapses and tragic setbacks to their programs.

The U.S. no longer has to rely on Russia to send Americans into space with the stunning advent of the Space X Dragon 2 series of manned launches, but the International Space Station, which first went into operation in 2000 with a crew launched from Russia’s Baikonur Cosmodrome, is getting creaky and starting to show its age. It is scheduled to reach the end of its funding cycle in 2025 and may have to be retired soon after that. If so, China’s Tiangong Space Station will be the only game in town.

But what is the game, really? NASA’s vision of the space station had an initial research focus, and some notable experiments in micro-gravity have been conducted, in addition to collecting physiological data and biological tests, but since 2010 NASA has recognized that diplomatic and commercial considerations are core to the mission. The commercialization of space not only helps address budget shortfalls for a very expensive program, but also helps drive public support. Educational missions also help create enthusiasm for the program, without which funding could see cuts. But it is in the diplomatic area where space exploration seems to dominate these days.

Space has always had a nationalistic component. Indeed, the space race was a dialectic between the Soviet Union and the U.S. for decades, each shocking the other with its new developments, each trying to outdo the other, but over the long haul it wasn’t so much a matter of “let the best talent win” as it was “follow the money.” Which side could afford to outspend the other? And while the net result was that the U.S. put its flag on the moon first, it’s still as much a story of money and human pluck as technology.

The USSR later broke up and saw a dramatic decline from its perch as first in space, and while it remained the only real rival in space, it simply didn’t have the money to do much. But the sturdy Soyuz craft was never really mothballed and dependably served to fill the needs of manned launches when the U.S. faltered after the denouement of the Space Shuttle program.

But it remains a dangerous business. Elon Musk is blunt about it, saying “a bunch of people will probably die going to Mars” yet he continues to be the world’s number cheerleader for Mars Missions with a long view to human settlement.

It’s not top-shelf science, but it’s awesome to have a low-earth orbit microgravity habitat for men and women who round our bright, shining planet every 90 minutes for inspirational photography and publicity stunts, and as such, both space stations, the ISS and Tiangong, are superlative vehicles for public relations.

For now, neither program has much to offer in terms of cutting-edge science—the business of keeping humans comfortable in orbit and maintaining a habitable platform takes up most of the crew’s time—but each endeavor can be understood as a bid for international prestige and hopefully, cooperation. Tiangong is China’s creative way of saying it will not be excluded. It has not only arrived in space, but is in it for the long haul, in space to stay.

Space CooperationU.S.-China Rivalry
printTweet
You might also like
Back to Top
CHINA US Focus 2022 China-United States Exchange Foundation. All rights reserved.